Sylux is a bounty hunter originating from the Metroid series. Though little is known about this hunter, it is known that Sylux has a great hatred of the Galactic Federation and its most renowned bounty hunter, Samus Aran. Sylux has apparently come into possession of several Federation prototype technologies which it uses to deadly effect. It is unknown what its species is, or whether or not it is male or female.

Sylux's alternate form is the Lockjaw, a strange prototype weapon that apparently transforms its user into energy and allows them to plant tripwire bombs while giving them extreme speed and maneuverability.

The Delano 7 is a stolen Federation prototype ship. Equipped with an autoturret besides its other weapons, it can be controlled by Sylux remotely and is used by the hunter to travel across the galaxy.

In this fanfic, Sylux is implied to a human male. Cold and efficient, he is a highly respected and feared bounty hunter, as well as an efficient and intelligent fighter. During the fanfiction he is contacted by a mysterious figure who demands Samus' death, an action he is more than willing to do, and he soon joins a multitude of other hunters all out to get her.

In Metroid Prime 4: Clone, Sylux makes a deal with the Space Pirates to take control of their space station, in return of Samus' death, which Sylux wanted anyway. Sylux however, pulls the Space Pirate's strings and uses their secret projects in hopes of destroying Samus. At the end of the game, Sylux merges with the new Mother Brain to destroy Samus but fails miserably. Sylux is implied to be destroyed along with the rest of the station after the battle with Samus.

In All-Star Heroes, Sylux's helmet was blown off when Boomer K threw a hand grenade and revealed that Sylux had dark hair and was male. The real reason why Sylux hates the Galactic Federation and Samus Aran is association.

Sylux appears as a playable character in Super Smash Bros. Galactic Battle, where he must be unlocked before being able to be used. Much like the rest of the Base Roster, Sylux is to appear in The Elemental Labyrinth, though his role is currently unknown.

Sylux appears in Jake's Super Smash Bros. as a playable character. Sylux's moveset revolves heavily around projectiles, with his Shock Coil and Electric Bomb weapons being part of his moveset, as well as the Imperialist weapon that, ironically, he is weak to in Metroid Prime Hunters. For his Final Smash, Sylux calls upon his ship, the Delano 7, which will automatically fire blasts of energy at his opponents for a short period of time. 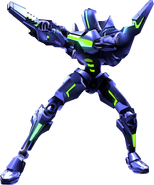