Sweetster is a Shy Guy and the best friend of Dupmal. He is a pink Shy Guy with purple shoes and a blue mask. He is more cautious than Dupmal and seems to have an obsession with candy. He also has a bunch of monster masks and when he wears one, he becomes the monster that the mask looks like, though he retains his body shape. It is revealed that he is, truthfully, a zombie. But when he saw what he looked like when he became a zombie, he instantly covered his face with a Shy Guy mask so that no one would reject him. 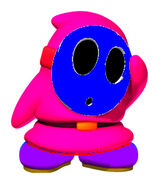 Sweetster
Add a photo to this gallery
Retrieved from "https://fantendo.fandom.com/wiki/Sweetster?oldid=2060332"
Community content is available under CC-BY-SA unless otherwise noted.