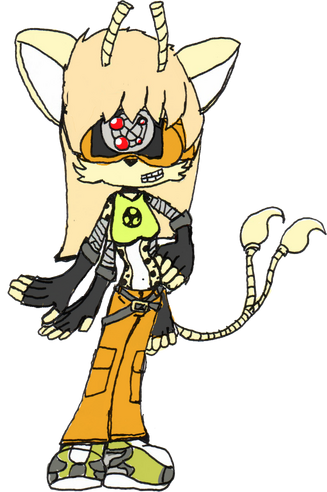 Suzumei Batchi is a 22 year old, mutated Espeon and one of the "Divine Nine" in Pokémobius: Chaos. While she's somewhat short in stature (around 4'2"), She has four arms, two antennae, and a forked, scorpion stinger-like tail that can carry and deliver venom. Her fur is a pale yellow color with strawberry-blonde hair and multiple ladybug/cheetah-like spots on her torso. Her outfit consists of a lime-green cutoff tank top, orange cargo pants, black, fingerless gloves, and chartruese and grey shoes. She also wears athletic tape on her arms, a double-belt, and a custom-made visor with a rotary eye beam, allowing her to pull off powerful attacks.

Suzumei is incredibly impulsive and unpredictably moody. While this makes her rather abrasive and a difficult personality to work with, She is also extremely organized and has good social awareness, meaning that she has no difficulties understanding people and putting herself in her servants' shoes when appropriate. Because of this ability to connect with people and foster camaraderie, she is the head recruitment and public relations within the Guardian Bulwarks. Having multiple hands and compound eyes, Suzumei is also great at multitasking and handling multiple attackers on the battlefield, using her heightened awareness and enhanced vision to her advantage.

Her spontaneity and good people-sense makes her extremely clever and funny when it comes to jokes and smart-aleck comebacks, so while she doesn't generally look down upon people, she can be extremely rude and cause tension with anyone who gets on her bad side.

Suzumei was once the latest decendent in a line of a prominent eeveelution family in Sendai, but the rift (that affected her for being on a field trip to an amber extraction point for high school) altered her genetics and turned her from a psychic type to a bug and normal type pokémon.

Her family had political power in the form of campaign donations to various bureaucratic heads in government, and bribed Sendai into letting her stay for research purposes. It was later then that Suzumei was promised freedom and power through the formation of the Guardian Bulwarks as a way to regain control and power over the previously excommunicated mutants.

Suzumei never truly fights directly. None of her attacks are hand to hand, thus she prefers to stay in the background and utilize her abilities that let her fight by proxy. This doesn't mean that she isn't a force to be reckoned with though, as she's very mobile and has the ability to escort herself to a safe distance if necessary.

Suzumei wears a protective visor that has four spinning, beam projectors down the center of the eye-piece. She can cause this visor to spin and all for lasers to fire out in a twisting beam of power at a foe.

To perform her Infestation attack, Suzumei lobs grenades filled with a gaseous substance that does not deal any damage by itself, but attracts nearby insects and other arthropods to those afflicted, causing a damage-over-time status.

Ability: Serene Grace - All of Suzumei's moves that have a random chance aspect are guaranteed to happen no matter what. This is a result of a positive mutation and part of the reason why she is so powerful.

Hyper Beam - Suzumei can fire a blast of powerful energy from her visor to decimate her opponents, but this move is highly risky, for she must recharge for a moment after using this technique. She cannot afford to miss it.

Infestation - Suzumei throws a pheromone grenade that attracts bugs to a target and directs them to attack, dealing damage over time and traps them in a location for a bit.

Silver Wind - Suzumei's visor can also unleash a rapid-fire stream of shiny projectiles that strike a target and dissipate into the air. If she breathes this, she will get an increase to her Attack, Defense, Speed, Special Attack, and Special Defense.

Toxic Thread - Suzumei can launch interweaving, poisonous thread from her tail that entangles opponents, slowing them down and poisoning them. 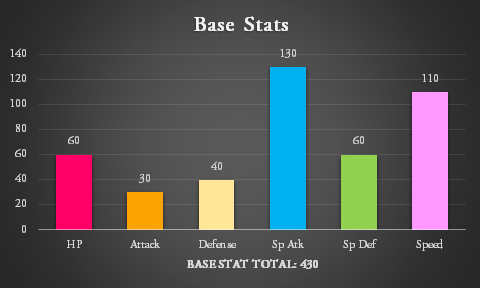 Retrieved from "https://fantendo.fandom.com/wiki/Suzumei_Batchi_the_Espeon?oldid=2737648"
Community content is available under CC-BY-SA unless otherwise noted.