Start a Wiki
“Hee! How do I look? Like a cool corporate spy, don't you think? You probably have no idea what I'm saying... Whatever...”
— Susie


Susie, full name Susanna Patrya Haltmann, is a character in the Kirby series, debuting in Kirby: Planet Robobot as a secondary antagonist. She is the executive assistant and secretary of Haltmann Works Company. She is also in charge of the Mechanizing Occupation Project, a project with the goal of eradicating all life on Planet Popstar and draining the planet's resources.

Susie is a slender young woman with a white face and huge blue eyes and eyelashes. She has no mouth or nose, yet can speak. She has straight magenta hair that is long enough to cover her back and has long bangs. She wears a light gray Haltonium business suit. It actually wraps around her head like a hood. Two blade-like object stick out from the sides of the hood. These are part of a visor helmet that Susie wears when piloting her mechs. She wears a dark gray pencil skirt and has no legs or feet. She also has disconnected orange fingerless hands that connect to metal sleeves. She also has a prized golden hair accessory.

Susie is a egotistical yet hardworking character who sees herself as intellectually superior to the inhabitants of Pop Star due to her technological standing. Susie respects physical strength, especially when it works for her cause. She takes her work seriously and works towards her own goals, which are sometimes at the odds of what she has been assigned to do.

Susie appears a Dream Ally in the game, being one of the first four that the player can choose from. She attacks primarily with bombs, screws, even a clipboard, being more of a character that fights from a distance. In the story, she convinces the other bad guys to team up with Kirby as she is aware of his immense power and how unstoppable he actually is- if they want to get out of the Nova Zoo, they need to team up with Kirby, she reasons.

"Susanna Patrya Haltmann, also known as simply Susie, is the daughter of Max Profitt Haltmann and the secretary of the Haltmann Works Company. She works on the EX Energy in order to study more about it in secret, because neither Exateno and Exa-Sectonia will want to let something like this to happen. However, this ended up working too well, as she had become Exa-fied does to overdose..."

Susie appears as an Omega Boss in the game, although not in her personal Invader Armor; she had absorbed a great amount of EX Energy to become an extremely powerful robot girl called Exa-Susie, with her own four customized Haltmann Armors which consist of Frostbite, Enchantress, Warrior and Illusion Mistress. She also have 250,000 HP, and although able to take halve damage from all attacks, she will instead takes 1,5x more damage when her antennas are hit.

More details are into the Omega Bosses section in Boss Battles.

Interestingly, despite debuting in this Umbrella game, Susie's Exa-form appears as a Palette Spray in Kirby: Nova Zoo and is named as simply EX Energy.

In the main game, Susie was only seen as a cameo, alongside Drawcia and Gryll, in one of Kirby's rare Stone Transformation in this game.

However, she hosts the Challenge Tower in hope to analyze Kirby or any other playable characters much further, but she does not mention her intention and even unusually welcomes the player. She even rewards Waddle Medals when the player completes each floors, but this is just because she had no uses of such "primitive currency". Shall the player keep failing, however, she scold them for wasting her time and even nearly blows her intention before quickly returning to her affable demeanor.

After the update of March 30th 2023, Exa-Susie had shown up as the real final boss of this game's Ultimate Choice, right after defeating Exateno. However, it is unknown if it is the same present Susie or a different Susie from the future (likely from Kirby: Story Break).

Susie have her own starring mode in the game, which is known as Susie's Strike, which serves as the Extra Mode similar of Kirby's Dream Land and Kirby's Return to Dream Land. Although her moveset is similar from Kirby: Nova Zoo, she can be imbued with any element, such as fire, ice, electric, wind, ice, water, leaves and light. She also brings her customized Invader Armor that works similarly to Kirby's Robobot Armor, although it cannot do Copy Ability.

Although the two argued at first, Susie said that she is only here by freak accident and that it was the other Susie in Story Break World that caused her to be in this dimension. Beta Knight, realizing that she argued with the wrong Susie, apologized and even willing to serve her in order to do payback into S.B. Susie, who is shown to be working with Story Break Taranza. Non-Story Susie and Beta Knight agreed to work together, but so that they will not bother each other again.

Exclusive partners to Susie are the Zenemesis, using the Zenemium that Susie had collected throughout her research. She can make copy version of various final bosses and notable foes, such as 0, Marx and the Jambastion Mages. While the Zenemesis can be revived and can perform Ability Combination (the name of Friend Abilities in this game), they have various weaknesses which means that Susie had to use them carefully.

In Kirby: Nova Zoo, it is possible for a second player to play as Susie and control her, allowing players to use a wide movepool of moves for her.

Susie has a low opinion of Kirby, considering him simple and dumb, especially compared to her. Although she understands his power, she belittles him when possible and calls him names like "Pinky" and "Native". During Kirby: Nova Zoo, she seems to have a somewhat shifted opinion of Kirby; while not in anyway a admirer of Kirby, she knows his strength, having seen him utterly demolish a Galactic Nova being controlled by the Access Ark with the Robobot Armor. As such, she suggests to everyone else that they work with Kirby to escape the Nova Zoo. 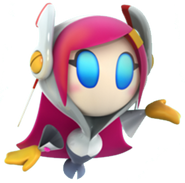 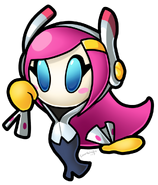 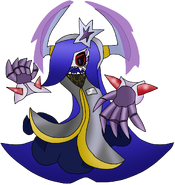 Susie's Exa-Form, first appearing in Boss Battles
Add a photo to this gallery

Retrieved from "https://fantendo.fandom.com/wiki/Susie?oldid=3232494"
Community content is available under CC-BY-SA unless otherwise noted.