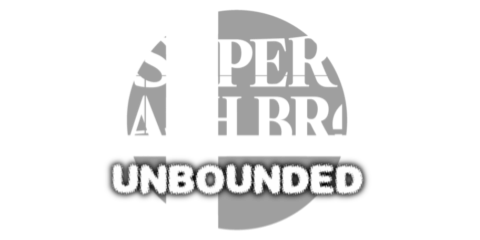 "Everyone was there... Now, they're moving forward."

Super Smash Bros. Unbounded (大乱闘スマッシュブラザーズ: 無制限, Great Fray Smash Brothers Unlimited), commonly abbreviated as SSBUB, is the sixth installment (seventh if the 3DS and Wii U versions of Smash 4 are counted as separate games) of the Super Smash Bros. franchise, released for the Nintendo Super Switch on January 21st, 2026. Series director Masahiro Sakurai returns to helm the project as a producer, but compared to his role in Super Smash Bros. Ultimate, he is much less hands-on with the development of Unbounded. Rather, Bandai Namco Studios and Sora Ltd. return to produce the game, alongside Faz Studios as a new developer/director of the project.

Much like its predecessor, Unbounded takes care to contain as much content from previous Smash titles as possible, only removing issues fans had with the design of past games. However, building a sense of community is also emphasized in Unbounded, with player-generated content and online play being heavily encouraged. To reflect this, the game has its separate set of dedicated online servers, resulting in a more reliable service than that offered by past games.

Just like its predecessors, Super Smash Bros. Unbounded is a 2.5D mascot platformer/fighting game. Contrary to most fighting games, the objective is to knock opponents into the blast zone of each stage, causing them to lose a point and the player who KO’d them to gain a point. How far fighters are knocked away by hits depends on their percentage meter, which rises when they are hit. The higher their percentage is, the more knockback they’ll suffer upon receiving a hit. Once the match concludes, the player with the most points is the victor. However, matches are not limited to point-based victory requirements: Players can also battle with limited lives (with the last player standing being crowned the winner) and for coins (with the player with the most coins being crowned the winner).

The game has a very simplistic control scheme: a single control stick is primarily used for movement and jumping, the A and B buttons are used for normal and special attacks respectively, and the shoulder buttons are used for grabs and shielding. Different combinations of buttons yield differing results: for example, pressing B while tilting the control stick in one of four directions will have the fighter perform a special attack depending on the direction of the control stick. In addition, holding A and tilting the control stick in a chosen direction will have the fighter begin charging up a Smash Attack, which is usually slower, yet much stronger than the normal “tilt” attacks.

A major element of the game are Final Smashes, which are gained in one of two ways: Either when a fighter breaks open the Smash Ball item or when their Final Smash Meter is completely filled up. Once this is done, pressing B will have the fighter unleash a powerful, personalized attack designed to be a heavily damaging blow to opponents. However, both the Smash Ball and Final Smash Meter can be disabled, resulting in Final Smashes as a whole being unusable.

Generally, Unbounded follows a similar gameplay style and speed to its predecessor, Super Smash Bros. Ultimate, with the following tweaks being present:

Aside from these differences, not much has changed regarding the game’s formula.

Super Smash Bros. Unbounded has many game modes available. While many return from Ultimate, new modes have been included to expand upon elements of Smash’s gameplay, as well as returning mode from earlier games.

Similarly to Super Smash Bros. for Wii U and Nintendo 3DS, Unbounded lacks a traditional story mode. This was done primarily for two reasons: To expand upon the “traditional” aspects of Smash and because the roster was too large to properly present every character in a suitable manner. However, Smash Dungeons, a new game mode, somewhat replaces the story mode in some aspects.

Super Smash Bros. Unbounded contains 126 characters in its base roster, with 24 characters being available as DLC for a total of 150 characters. Once again, every fighter from previous Smash games returns, with many receiving updated movesets.

Unlike Ultimate, characters are organized by series by default. However, there are options to sort fighters by order of Smash debut or name, as well as an option to design one’s own selection menu from scratch.

Much like previous Smash games, only a certain selection of characters are unlocked upon first starting the game. The remaining characters can be unlocked through a variety of methods:

For a list of all the fighters' movesets, see here.

Super Smash Bros. Unbounded has 178 stages for players to fight on (198 if DLC stages are included). While many return from previous Smash games, there is quite a number of new stages. Each stage has a set of variants:

1: If Tails or Knuckles are being played on this stage, they will not appear in the background.

2: Meta Crystal, while technically being a veteran stage, is playable outside of 1P Mode for the first time in Smash Unbounded.

If desired, a number of items can be activated to randomly spawn on the stage. There are 104 different items for players to use, with many returning from past installments of Smash.

With the Assist Trophy item, over 100 different characters can be summoned to help their summoner in battle. While many Assist Trophies can be defeated after sustaining enough damage from opponents, a few cannot be defeated. Regardless, each Assist Trophy will only be active for a short amount of time.

By using the Poké Ball and Master Ball items, various Pokémon can be summoned to aid fighters in battle. Similarly to Assist Trophies, Pokémon will only remain on the stage for a short time, but none of them can be KO'd.

The Master Ball can only summon specific Pokémon; These have their names in purple. New moves are marked with an asterisk (*).

Retrieved from "https://fantendo.fandom.com/wiki/Super_Smash_Bros._Unbounded?oldid=3291373"
Community content is available under CC-BY-SA unless otherwise noted.