Super Smash Bros. Ultimate x Tekken is the name of the collaboration between Nintendo and Bandai Namco's Tekken series. In this collaboration, in the form of paid downloadable content, has both Heihachi and Kazuya as a playable fighters along with their stage, it also includes numerous characters and items as spirits, music from the series, and cameos.

Tekken is a 3D fighting franchise made by Namco back in 1994 and is one of the earliest 3D fighting game series next to Sega's Virtua Fighter. Since 2017, it saw numerous entries, spin-offs, merchandise, crossovers, a two-part OVA series and three feature films, two of them are live-action, with both the second and third installments being landmark titles. Much like Virtua Fighter, the gameplay is focused on 3D with hand-to-hand combat mechanics, but this one allows the player to control four limbs independently, later games introduced special moves and breakable stages. The main story is about the King of Iron First Tournament hosted by the Mishima Zaibatsu, where a partecipant must fight a pletora of fighters to win the tournament and took over the company, with the conflict between the Mishima family serving as the main focus.

Heihachi Mishima is the second owner of the Mishima Zaibatsu after overthrowing his own father as the head of the company. He holds the tournament for his purpose of gathering the strongest fighters for his own use. He has a big conflict with both of his son and grandson.

Heihachi is a playable fighter added into Super Smash Bros. Ultimate, based on his older appearance since Tekken 3, labelled as Fighter ??? of the Third Party DLC Pack.

Coming from a fighting series, Heihachi has similar attributes to Ryu, Ken and Terry, as he always faces his opponent when walking left, has command inputs to make his moves stronger, and can cancel any move he wants, the second however, is much different than usual. To emulate the gameplay of his games, the input have multiple moves attached to it, for example, he can cancel Forward Tilt with either Up or Down Tilt after the first hit. Unique to him is the sidestep attack, which during a roll or a spot dodge, he can cancel the animation with a combo string. Another fighter ability is the Rage System, much like Terry's Super Special Moves, when he is at 100% of damage, or 30% less of HP in Stamina Battle, he will grow red and increase the damage of his moves. During the Rage mode, Heihachi gains access to the Rage Drive, which can only be performed once per stock, as the damage and knockback is on par with a Final Smash. The third mechanic is the Down + Forward input, a staple of Namco's fighting games, giving him another move he can perform, and can cancel into other tilts. He is the first character to have a A and B attack at the same time.

As for his overall stats, he is similar to Little Mac, very strong on the ground, but lacks air combat, and his dashing speed is the same as Wario, Mii Swordfighter and Lucas. 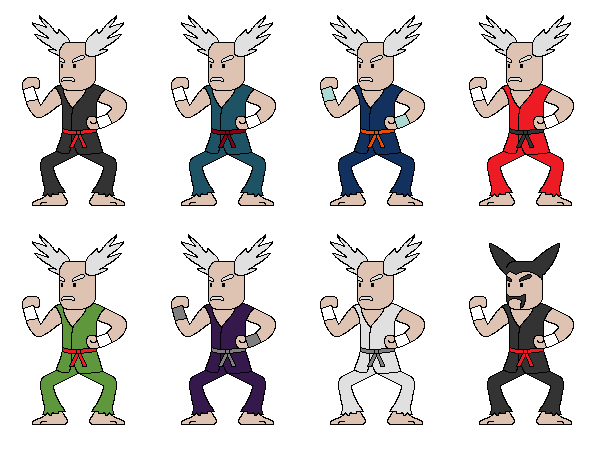 Kazuya Mishima is the son of Heihachi Mishima and the main protagonist of the very fist game. He is a brutal man who has a vendetta against his father after being thrown into a cliff when he was young. He has the Devil Gene with in it as a result of "dealing with the devil", allowing him to transform into a dangerous demon knowns as Devil.

Kazuya is a playable fighter added into Super Smash Bros. Ultimate, based on his appearance since Tekken 4, labelled as Fighter ??? of the Third Party DLC Pack.

Kazuya is the semi-clone to his father, he is a little faster and lightweight than him with almost a different moveset, though he doesn't deal much as damage as Heihachi did. He retains the unique mechanics, except his B and A move and some of the canceling tilts. 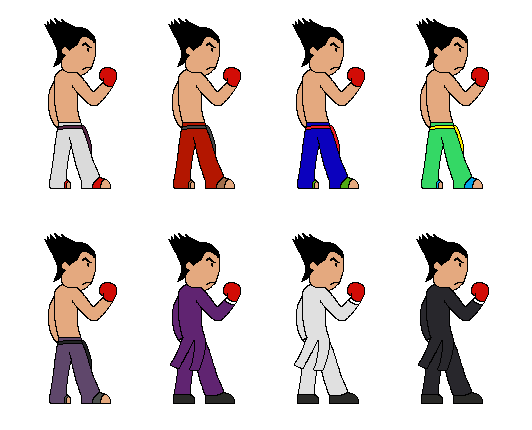 Much like King of Fighters Stadium, it is a basic large flat ring similar to the Tekken games, with the invisible walls retaining, in which the player can KO its opponent by dealing enough knockback. It takes place on a training dojo and a Budddhist shrine owned by the Mishima family with wooden floors and several statues adorning the sides. When the fighter gets KOed, it causes the statues to collapse. There's another part of the stage above them, which will broke the floor itself if the fighter gets knocked down by a spike or a meteor smash multiple times, similar to the breakable stages in recent games. In it, it is a desolate lair containing two Buddha heads, likely two Niō deities, on both sides in the background. Kuma makes a cameo, either cheering on the fighters or training himself on a tied wheel.

Heihachi’s opponents are a reference to multiple characters from the Tekken series and are Stamina battles with all of the stages being in Ω form with items being disabled.

Kazuya’s opponents are a reference to the Tekken 1 cast and are Stamina battles with all of the stages being in Ω form with items being disabled.

Credits roll after completing Classic Mode. Completing it as Kazuya has “BRIMSTONE & FIRE” accompany the credits.