This article is complete. No more content shall be added to the pages - any more edits should only be formatting, grammar etc. changes.

Super Smash Bros. Ultimate x NieR:Automata is the name of the collaboration between Nintendo's crossover fighting game and Square Enix's NieR:Automata. As part of the Super Smash Bros. Ultimate Fighter Pass e, content from NieR:Automata would appear in the game in the form of paid downloadable content, including the protagonist 2B as an additional playable character, Amusement Park as a stage, music from the series and additional spirits. As a bonus, A2 is included as an echo fighter.

The inclusion of 2B would be revealed at E3 2020, with the character being set for release in November 23rd, 2020. 2B is the third character to be revealed for Fighter Pass e, with A2 being the first downloadable echo fighter. 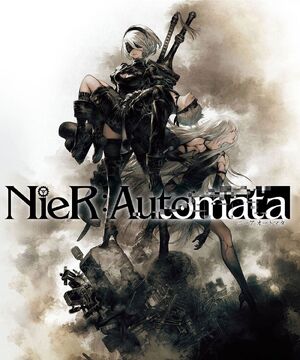 NieR:Automata is the sequel to the original Nier Gestalt/Replicant. Despite it's sequel status, it features a very different setting although is set in the same universe as the original game, just much further into the future. In this universe, humans are mostly a memory and robots run across Earth in a proxy war against invaders. The game was developed by PlatinumGames with Yoko Toro directing. The game was a surprising success, with it's announcement also coming as a surprise due to how poorly the first game was received and was a financial flop.

As a project entirely new to the developers, the staff at PlatinumGames faced multiple challenges when developing its gameplay and open world environment. The story, written by Yoko, references several philosophies and explores themes of finding value in life and the reasons people kill. Set during a proxy war between alien-created machines and human-crafted androids, the story follows the trials of a combat android named 2B, her companion 9S, and a fugitive prototype named A2. The story requires multiple playthroughs to get the full scope, each unlocking additional story elements and new plotlines. Gameplay combines role-playing elements with action-based hack and slash combat, and features harsh switches between video game genres similar to that of the original Nier with elements ranging from shoot 'em up to text adventure.

2B has been in many games since her debut in Nier:Automata, including appearances in mobile titles and Soulcalibur VI.

As part of the Challenger Pack, the following content is added to Super Smash Bros. Ultimate.

YoRHa No.2 Type B (Battle) aka 2B is added as a playable character along with a wealth of brand new content for the game. She is labelled fighter #78 and features her primary outfit from NieR:Automata. She has her 2P alternate color scheme as her second costume, which first appeared in Soulcalibur VI and appears as the central character in YoRHa:Dark Apocalypse, a raid in Final Fantasy XIV: Shadowbringers. Her other alternate costumes are color swaps that reference other characters from the NieR universe, including Commander White, Devola, and Kaine. Some of her alternate costumes remove the blindfold around her face as well, or add ribbons to her hairbow. She also features her Heavy Armor A costume as her final alternate costume.

2B is a very light fighter with a good amount of air game. Her ability to switch between heavy and light sword attacks allows her to do more damage at differing attack lags. She can move across the stage quickly while attacking, allowing her to propel herself and her opponent towards the edge of the stage, moreso with her heavy sword attacks. Another unique property of her sword attacks is the ability to use them dislocated from her hands, allowing her to gain greater reach. However, some attacks will add additional lag to when she can next attack, as it will become buried in the ground and 2B has to resummon it back to her to resume attacking. She is overall a very fluid fighter with some openings at the ends of her better attacks that can be punished if not careful.

2B stands out against other fighters due to her two weapon system as well as the ability to space out her attacks using Pod 042. Her moveset is also very fluid, allowing her to quickly buffer into other moves, allowing for creative combos. She is particularly strong against heavy opponents. Opponents with similar speed and/or attack strength and speed tend to be where she finds the most difficulty against. Stunning her during her moves can allow for openings to attack. Pod 042 can get around some of these problems due to him being considered a separate entity.

YoRHa Type A (Attacker) No.2 aka A2 is 2B's echo fighter, and so far the only known echo fighter to be included with a downloadable fighter. She is labelled fighter #78ε and features her primary outfit from NieR:Automata. Her alternate costumers reference other characters from the NieR universe, such as Officer 21O and Pascal. Some of her alternate costumes feature short hair.

As 2B's echo fighter, A2 is naturally very similar to her in playstyle. However, she features a number of key differences from her:

As 2B's echo, she plays very similarly overall, but more aggressive, with her changes to the moveset making her able to fight faster with the short blade and deal more damage with the heavy blade. The differences between the two characters are a little more pronounced than usual for echo fighters, but still features a lot of the same weaknesses and strengths of her original fighter while changing things for more aggressive play.

Amusement Park is a stage that comes bundled with the Fighter Pack. In the context of the NieR:Automata series, it is home to a bunch of robots and is nearby the robot village. Many of the robots here are passive when 2B and 9S originally go through here. While not a major part of the story of NieR:Automata the area has an iconic look to it, featuring a heart shaped hole and broken down rides.

In Super Smash Bros. Ultimate, the stage takes place on a gazebo just outside of the park. Fireworks are fired in the distance from the park, while friendly robots throw confetti in the background. The layout of the stage features a platform close to the bottom of the screen with the sides of the stage cut off to have ledges that lead down to the bottom blast area. The stage features decent sized blast ranges, although the camera is directed close to the stage.

The main platform features a roof and pillars that hold it up, as well as the main platform. The top of the roof is decorated with lights and features a additional jutting roofbit that separates one half of the roof platform in the center. It also the only part of the stage platform players can't jump through or descend down.

The stage lacks true hazards, true to how it is in it's original game. The stage also expands in size when 6 players are put into consideration, able to hold up to 8 as a result. The stage plays music from the NieR:Automata series only.

Special variant of the Super Smash Bros. logo created for the collaboration. 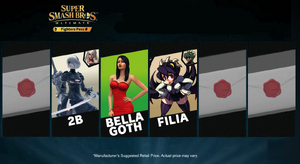