The trailer begins in what appears to be Saffron City. A seemingly peaceful day is interrupted when Dragon Quest's very own Hero lands on the pavement, causing nearby Rattata and Pidgey to scatter. As Hero gets up, we see that surrounding him is none other than some of gaming's greatest foes; Bowser is spewing fire from his maw, King K.Rool is slowly encroaching with his blunderbuss ready, Ganondorf's fists are brimming with dark energy, and Ridley is twiddling his thumbs together with a grin on his face. The Hero gets up and uses whatever moves he can against the villains, but all fail and Hero is eventually tossed on the ground in pain as all four of the foes prepare to deliver one final strike.

Then, out of the shadows...WOOSH!

All four villains are sent flying into the sky from a mysterious figure, leaving Hero alone to get back up. The figure stands in front of the sun, their face obscured by shadow as they reach out to grab Hero's hand. The young warrior smiles and grabs their hand...

...Only for a SLASH! sound to be heard as Hero is sent blasting off into the sky just like the villains before him.

The figure turns around, their full body now visible. They laugh and smile to the camera as... 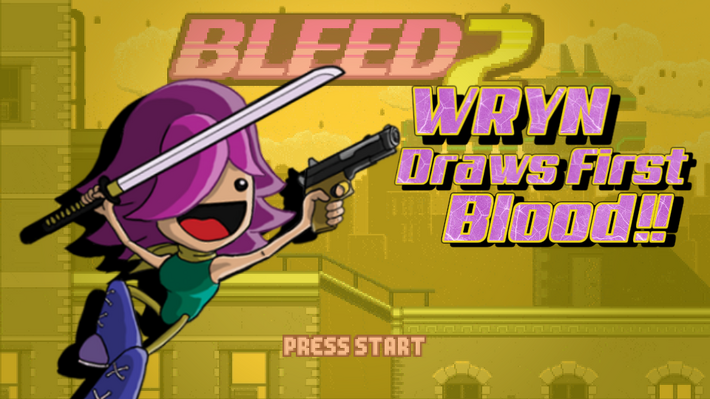 The video switches to gameplay, revealing Wryn's full 3D model as Escape (BLEED 2) plays. In game, she performs various attacks, taunts with Pikachu on Big Blue, uses her specials individually to reveal her bullet-shooting, air-dodging, and time-slowing abilities, before greeting the four villains from the cinematic on her home stage; New Detroit, a fight on top of apartment rooftops as Valentine's airship hangs out in the background shooting debris into the sky. Wryn then uses her Final Smash, calling upon the Rival inside of his truck to deal out damage with his various gadgets and missiles.

We cut back to the cinematic, Wryn standing proud at her accomplishment when three shadows begin to loom over her. Turning around, Wryn is greeted by the Master and Crazy Hands; in between the two in her archnemesis Valentine, grinning as the hands begin to attack Saffron City. Wryn jumps up, dodging Valentine's attacks as the two prepare for a one-on-one confrontation. The camera zooms away from them, revealing that Valentine's airship has landed above the city and is preparing to launch minions into the streets below. The trailer than cuts away, revealing the following logo as Stage Clear (BLEED 2) plays.

After the logo appears, we get a brief shot on the top of Valentine's ship as five figures crash down onto it. The Hero gets up as Bowser, K.Rool, Ganondorf, and Ridley all stare him down. The five prepare for a four-against-one brawl, Hero pulling his blade as the villains ready their attacks. Just before they can duke it out again, the trailer cuts to black, revealing a release date of LATE SPRING 2020.

On February 13th, 2020, Wryn from the indie series BLEED was revealed for Super Smash Bros. Ultimate as the first DLC fighter who hailed from the second Fighter's Pass, coming after Devil May Cry's Dante shadowdropped on the same day. BLEED is a two-game series about a perky girl named Wryn who aims to become the best hero in the world. In the first game, she slays the former heroes who had turned to villainy and preyed on the weak, defending her title against the blonde-haired Rival who tried to steal it from her. In the sequel, Wryn and the Rival must team up to take down a new threat; Valentine, Wryn's power opposite in terms of powerset and motivation. Across both games, Wryn is still an upbeat heroine who even speaks directly to the player at specific points, either joking about the situation or giving them motivation. In a game full of famous video game heroes, it only makes sense for Wryn to want to participate and defend her title.

In the BLEED games, the main goal is to bust through a gauntlet of levels that each hold a story-relevant boss at the end. A fusion of Mega Man, Devil May Cry, Contra, Bayonetta, and Touhou in terms of gameplay, each character has three mid-air dashes, a style meter, a special gimmick, and the ability to slow down time. There's a variety of weapons to choose from, whether they be katanas, dual pistols, chainsaws, lazer guns, a weapon that increases with the level on the style meter, and a reflector that comes with the previously mentioned kitana. Depending on the character you play, you're able to reflect differently colored bullets, shoot out giant laser beams, absorb projectiles, or...nothing at all. The better you perform at the stage you're on, the higher your overall rank will be when you reach it's end.

Each game includes modes specific to that game; for example, Challenge Mode is in both games, but Endless Mode is exclusive to BLEED 2. Since the game's original 2012 release on Xbox Live, Wryn hasn't been in much; she was a guest rival in Chucklefish's Pocket Rumble alongside other indie stars, gotten a sequel in the form of BLEED 2 in 2018, and has gotten a trophy in Indie Pogo. BLEED features crossovers with other small-scale indie stars; Plucky from Plucky 3D's Adventure, White MK I from Freqμency, and the Clawed Girl from They Bleed Pixels are all playable characters as of BLEED 2, along with Rex Rocket from Rex Rocket being the final boss of the third level. After a brief hiatus, Wryn has finally returned to the gaming scene, being the first playable indie character in Smash Bros. after cameos from Shovel Knight, Shantae, Commander Video from the Runner series, and even Sans from Undertale. 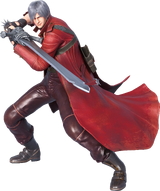 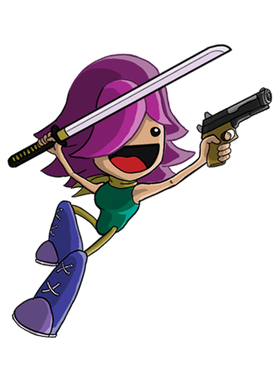 Wryn is an upbeat, confident, perky young girl who has three goals in mind: play video games, drink all the milkshakes she can, and become the greatest hero of all time. In BLEED, she does so by killing all previously ranked heroes who had turned on the world...except for Plucky, the kind flower-human newscaster. When she slayed the Dragon and took her title, she was forced to fight the Rival, who aimed on claiming the title for himself with none of the hard work. When the two beat each other and the day was saved, Valentine, the greatest villain of all time, aimed to destroy the world, causing both to team up and share the title at her defeat.

In Smash, Wryn is a flashy quick fighter that has various weaker attacks to compensate for both her incredible speed and her stronger attacks. Wryn has two gimmicks: the reflector on all of her Smash Attacks and her personal Style Rank, similar to that of Dante's. Wryn's specials include a barrage of bullets, a large laser beam, three mid-air dashes, and the ability to slow down time around her. While fast, she's not super durable due to her spindly frame and needs to constantly have the upper hand in order to succeed. If you win with Wryn, you win with a character who has plenty of strong tools that you can't just use with reckless abandon; she controls as if you were playing her home games in certain instances. 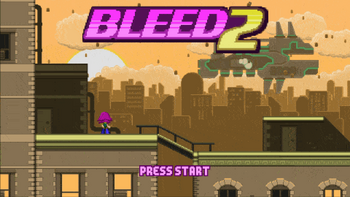 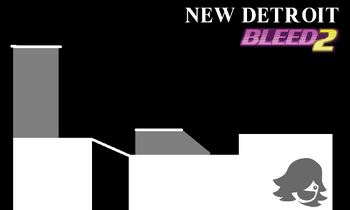 New Detroit is the starting level of BLEED 2, taking place right when Valentine's ship begins to attack the city. While not present in the rest of the game, this is easily the most recognizable of all the locations even if it's only present in half of the first stage. The stage itself is set on top of the roofs of the city, recreating a portion of the start of the level complete with the slanted bridge and semi-solid platforms. All thin platforms (including the slanted bridge) can be dropped through, giving this stage more vertical ways of fighting. The stage features two bottomless pits on the sides, isolating this battlefield from the rest of New Detroit.

In the background is Valentine's ship, debris flying up in the background. Some of Valentine's drones fly in on the stage and can easily be K.O.'d, but act as temporary hazards by firing off small or giant shots depending on the weapon they wield. Their bodies can be used as projectiles that can be flung at foes if they're K.O.'d, as they lay on the ground for a few seconds before disappearing. 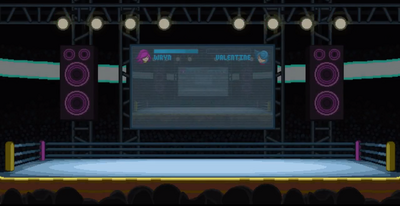 While not a new stage, Punch-Out's!! very own Boxing Ring gains an entirely new skin to go along with the DLC! It keeps the walk-offs, ropes, and lights from the regular stage while completely changing up the aesthetic! Who knows...maybe a certain someone would like to fight here...

Wryn's brought a large chunk of Spirits to the fray; three Fighter Spirits, nine standard Spirits, and one upgradable Spirit not on the board.

Wryn's Classic Mode is titled "Hall of Heroes" and is inspired by the first BLEED's overall story; each fighter is designed to specifically reference the bosses of that game and ends in a fight against the Rival himself. Upon beating it for the first time, you gain Wryn's Fighter Spirit and randomized goodies.

Along with Wryn, content from all over gaming is present when discussing the Mii Costumes. While two out of the seven new additons come from BLEED, the rest are all additions for other series, indie or not! These include the return of the Runner series to Smash along with a few surprises...

Wryn comes with a total of 19 new music tracks that play on New Detroit; like Terry before her, the music she comes with doesn't just span BLEED and also includes tracks from other indie games such They Bleed Pixels, Evil Factory, Nuclear Throne, Celeste, and MINIT. Jukio Kallio's music returns from BLEED 2, Evil Factory, and Nuclear Throne, Celeste, and MINIT with no new remixes.

Retrieved from "https://fantendo.fandom.com/wiki/Super_Smash_Bros._Ultimate_x_BLEED?oldid=3123293"
Community content is available under CC-BY-SA unless otherwise noted.