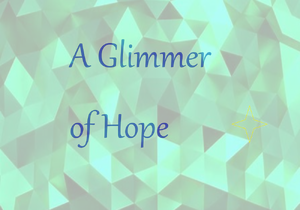 A Glimmer of Hope is the Storymode for Super Smash Bros. Emerald. In this new mode, the 10 Smash Crystals have mysteriously disappeared, even without the almighty guardian realizing it. Join Mario and Kirby to save the other fighters after they go missing, along with the Smash Crystals, who will give the holder the power to be able to rule the Smash World. Be careful, the Smash Crystals must be in the wrong hands.

This Storymode is played through similar to a board game. The current player's fighter will be able to hop from block to block in a board game-like setting. Almost every space has an obstacle on it, including spirits, puppet fighters to be saved, Smash Minigames, and more. When the player approaches one of these obstacles, he first must defeat/compete/destroy the obstacle to continue, but there are several choices in multiple instances, giving freedom of choice.

The World of Smash, casually called the Smash Kingdom, was having a peaceful day in early June. Many of the fighters were enjoying a beautiful day at the park in the center of Great Urbia, the main city in the Smash Kingdom. Mario, Luigi, Peach, Bowser, Donkey Kong, and Pauline were all enjoying a lovely picnic, and Link and Zelda were gazing at the clouds. Everyone seemed to be enjoying themselves. Finally, it became evening, and everyone had to return to their respective universes through portals at the boundary of Great Urbia.

Mario had just woken up the next morning in the Mushroom Kingdom, as he goes to check on Luigi, he realizes he was missing, but strangely enough, without his cap. Luigi takes his cap everywhere thought Mario, leaving him to conclude that he didn't leave from free choice. Mario ran to see the princess to tell of this event, but when he arrived, he found that the toads were distressed to find that the princess was missing too, how strange. Mario found that various other residents of the Mushroom Kingdom who all fought in the Smash Kingdom had disappeared too, including Bowser, Rosalina, and Donkey Kong. Mario decided to return to the Smash Kingdom to get to the bottom of this great mystery.

When Mario arrived back at the Smash Kingdom, everything looked totally fine in the city. Mario could not find any of his fellow fighters in the city, which was unusual, at least some were usually in Great Urbia. When he reached the park, he found no fighter but Kirby. He approached Kirby and explained to him how everyone who had fought in the Smash Kingdom was missing. Kirby seemed surprised by this, as he replied saying that all the fighter in his world were gone too. Mario and Kirby began asking around if anyone had seen a fighter, but the answer was always a no.

A local citizen pointed up into the distance out of the city and shouted, "Look, an explosion, at the Crystal Tower!" The Crystal Tower was the tower seven miles from the edge of the city that held the 10 legendary Smash Crystals. These Smash Crystals granted the user to unleash ultimate smash powers in battle, so they were locked up, and have been guarded for over a thousand years by a creature named Dethora. Not much was known about Dethora, as no one had seen her in several centuries.

Mario and Kirby rushed to the tower to see the happenings, and upon arriving, they found that a giant explosion at the room of the Smash Crystals had occurred. Mario and Kirby quickly found an entrance to the tower and rushed to the top. When they reached the top, they saw a creature in the outfit of samurai bathed in a purple glow. She was kneeling on the ground weakly shouting, "Don't just stand there! Stop him, he's got the Smash Crystals and he's flying away!" Mario and Kirby looked at each other confused, they didn't see anyone stealing the Smash Crystals or flying away out of the tower. The creature turned around and said, "Nooo! He got away, now we need to follow him to return the Smash Crystals! Who knows what the world has in store for us! Well, it has been quite a while since I have seen strangers. Why are you looking at me so surprised, didn't expect that the 'legendary keeper of the Smash Crystals' was a female? Well, now you know. Since you let the thief get away, you're coming with me." She then smirked at them and said, "Oh, yeah, I overheard you from here in the village, sounds like you lost your friends anyway, maybe they will be on the way."

Mario and Kirby looked at each other skeptically and followed her down the stairs to the exit of the tower. "Let's go, you slow two creatures of little words. I need your help." The three of them started to journey into the barren desert past the Crystal Tower, further away from Great Urbia… and their own kingdoms.

Dethora began on their adventure saying, "The thief somehow defeated me in battle, and there is only one who would be so fiendish as to steal all the Smash Crystals, Nixhin. He is a creature of great size. He is covered in a black cloak has many other powers that I am unable to fully comprehend. I'm afraid we will have to travel a long time to reach Nixhin's palace, and there are many obstacles and perils on the way. We must be careful and alert. And hey, maybe we will find your friends, the amazing Fighters of the Smash World, it is an honor to meet you both." Mario and Kirby nodded and continued listening. "I must say that there are weird spirits that roam the places we will encounter on our journey, they are unlike anything I've ever seen, maybe they are from your own kingdoms, legend says that they came out of the portals anyway.

The three then continued across the desert for a long time silently. Mario, not paying attention and looking up, was suddenly jabbed by the staff that Dethora was carrying. "Careful, up ahead is a giant trench, it looks like we must pass it to continue. There are platforms across, but they seem very unstable, I will need you, Mario, to cross first along with Kirby, and I will follow. There may be spirits along these paths careful." Dethora is right, as they begin to approach the trench, and spirit approaches and whispers in a mysterious tone, "You may not pass." A puppet fighter pops out, and it is a gray Mario. The puppet Mario taunts Mario to a duel and the first battle of the Storymode begins.

The battle is against the spirit of Smokey Progg.

Once this spirit is defeated, the spirit starts bouncing around with joys and flies into Mario, giving him a chilling but yet warm sensation. "Oh, it seems like the spirit has joined your party." Following this, Dethora gives an introduction on how to use spirits, but this can be skipped for the purposes of this narrative.

As they approach the trench, Mario hops onto the first space, but on the second space he notices a spirit. The only way to pass is defeat the spirit, to pass the entire trench, Mario (or Kirby if the player is playing as him) will pass the entire trench. But he will not have to defeat every single spirit. The board layout of The Barren Desert is below.

Retrieved from "https://fantendo.fandom.com/wiki/Super_Smash_Bros._Emerald/A_Glimmer_of_Hope?oldid=2984070"
Community content is available under CC-BY-SA unless otherwise noted.