The game received the name Duality as a homage to the importance of appreciating age-old traditions that work for the series while simultaneously shattering the boundaries that may not work as well moving forward. The game's director, Heronimbus (t∣b∣c), believes that massive revitalization of the fighters and content that Smash fans have grown accustomed to for several years will prove to be helpful for the beloved franchise in the grand scheme of things, especially in the inevitable post-Ultimate era where a lot of content will have to be cut. Thus, Duality is intended to serve as a bridge between the era of Melee, Brawl, and Smash 4 and the post-Ultimate era; almost all series veterans join a massive amount of newcomers, with several veterans gaining some major tweaks and select fourth-party characters joining the fray.

The intro begins with four lasers slicing out the four chunks of the classic Super Smash Bros. symbol, leaving a cross in the middle and setting the chunks themselves on fire, as a homage to the announcement teaser for Super Smash Bros. Ultimate. We zoom into the cross as the screen flashes white. After the white fades out, we catch a view of a massive, flowing cosmos of 0's and 1's, and a zoom in warps us to a massive coliseum not unlike the one seen at the beginning of Melee's intro.

Trophies of Mario and Sonic are dropped into the battlefield, and the two fighters are summoned in a glowing mist of binary. They glare at each other before charging for their attacks; Mario swings his cape as Sonic uses a Spin Dash and jumps over him, boosting towards him as Mario slings his hat to stop the hedgehog. Sonic leaps over the hat, and we see Cappy's eyes look up at him with shock.

We then see Samus and Fox taking on Ridley in what appears to be Frigate Orpheon. Donkey Kong and King K. Rool growl at each other over bananas, as Banjo & Kazooie look at them nervously. Meanwhile, Link, Ike, Shulk, and Cloud confront the demon Ganon, who aims his trident at them with fury.

In a Pokémon stadium, Pikachu, Greninja, Incineroar, and Serperior all pop out of Pokéballs and pose for the camera, before being interrupted by Bowser, who tries to attack them as Incineroar stands his ground.

Ness and Lucas duel in Magicant, and Wario rides past them both on his motorcycle, causing them to fall off the cloud. They are caught by Captain Falcon, who is chasing down Deathborn on his F-Zero machine, the Blue Falcon.

Bayonetta and Dante fire rapidly at each other with their pistols, as Wryn sits on a couch eating popcorn.

Mama prepares a fantastic meal for Kirby, Yoshi, and Pac-Man, but King Dedede steals the food, leaving the four of them to chase after him. Isaac and Shadow cross their arms with frustration as Piranha Plant holds a trophy, laughing.

The audience cheers at a boxing ring as Little Mac and Ryu brawl, with Pauline and MC Adore performing in the background.

Shantae walks out of her lighthouse and finds Pit and Sora fending off an army of Heartless. As she joins the battle, she sees a strange darkness swarming the bayside.

Simon and Snake enter a dimly lit temple where they encounter a large sword with a bulging eye at its side. They hear stomping, and Nightmare pulls Soul Edge out of the floor and yells with rage, swinging at them with one wide slash.

We cut back to the fight with Mario and Sonic, who have noticed the expanding darkness and paused. They see an armada of Subspace gunships approaching them, with Galleom leading the way. Mario and Sonic turn to each other, not knowing what to do, until a Hawaiian teenage girl wearing a short dress decorated like a set of Hanafuda cards meets up with them. Healani smirks and pulls out trophies of the other heroes seen in the intro thus far, summoning them into battle. However, Bowser, Wario, K. Rool, Ridley, Deathborn, and Nightmare have also been summoned.

The heroes split up to fight the villains, taking turns against them. Mario and Sonic charge towards the Subspace fleet, with even more heroes like Sparkster, Inkling, the Ice Climbers, Mega Man, and Olimar arriving to help. As the other heroes take down the other villains, they follow Mario and Sonic's group and leap towards Galleom. The camera angle shifts directly in front of the group, as Healani prepares to punch the screen.

A flash of white appears, and we see a man in a black/white suit hold a pistol up to his lips, blowing on the muzzle.

The famous GoldenEye 007 theme plays as he turns and walks out of the shot, and a quick montage of character icons flashes by. The Super Smash Bros. Duality logo appears, the announcer calling out the title with excitement.

In terms of gameplay, Super Smash Bros. Duality remains quite similar to past installments of the series. Players use normal and special attacks to deal damage to each other, trying to knock them out of the stage. Each player has a percentage shown at the bottom of the screen, which increases with each hit they take; the higher the percentage, the greater chance they have of being KO'd.

Each character has a moveset consisting of normal attacks like punches, grabs, throws, and aerial attacks, as well as four special moves unique to said character. They also have a powerful move known as a Final Smash, which can be used after breaking a Smash Ball that appears randomly on the stage.

If items are turned on, they will spawn randomly around the battlefield, allowing players to use them to their advantage. Some items can be used to attack opponents, and others will apply certain effects to the player using them.

Compared to past installments, Duality puts an even bigger focus on interaction between players. It is the first game in the series to enable cross play; players on the Nucleo, V2, and Steam platforms can all play with each other online.

Due to the large amount of data the game takes up, there are more ways you can save your game without filling up storage. Players can now have multiple game files, which can be saved onto their console's internal storage, as well as their Cloud profile, a MicroSD card, or an amiibo figurine.

Players can also make mods for the game and share them with others.

Changes from Past Installments

A wide variety of modes can be played in the game, some returning and others brand-new. The names of new modes are colored yellow on this table.

All playable fighters from Super Smash Bros. Ultimate return except Marth, Chrom, Sheik, and the Mii Fighters, each being cut for the following reasons:

Wireframe Fighters are the spiritual successors to the Mii Fighters from SSB4 and Ultimate, designed as an adaptation to platforms that do not use Mii characters in an attempt to make custom characters more universal for cross-platform play. They carry over most of the original features, but have a few additions of their own to make them stand out. Wireframe creation is also more expansive compared to Mii Fighter creation, but also more streamlined in that you do not need to create another Wireframe of the same model for each possible fighter class, and the classes can be accessed right away on the character select screen.

When you create a Wireframe, you will be able to choose from three possible gender options: Male, Female, and Neutral. From there, you can customize the Wireframe's height, weight, and body proportions, or select a model preset based on a particular character to expand on. If you choose to do so, you can also go beyond the normal Wireframe physical appearance and add skin/fur, clothes, etc.. Eye, hair/fur, and skin colors can be customized as well. (Note that you cannot make your Wireframe naked, as their undergarments are shown by default when you get past the classic wireframe.)

Personality traits are categorized under elements, which not only determine your Wireframe's quotes throughout the game, but also the attacks they use in battle. The game's Elemental Personalities, based on most of the Pokémon types, are as follows:

Resistance Calls are this game's Smash Taunts, succeeding Codec Conversations and Palutena's Guidance from past installments. They can be activated by Sonic on an unknown stage.

Go to this subpage for details.

An official gallery of artwork made for the game.

A Dark Forces' beta boxart, made by DarkSpark83 (t∣b∣c). 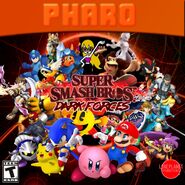 The last Dark Forces boxart before the game's rebranding as Duality. Designed by Heronimbus (t∣b∣c) himself.