This subpage covers all the bosses seen in Super Smash Bros. Calamity. 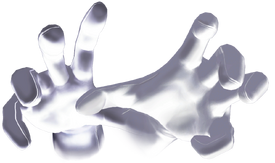 Hand Duos; Master Hand and Crazy Hand, are two living hand duos who are the primary antagonists in the Super Smash Bros., with Crazy Hand debuting after Master Hand. The two of them are fought together in Classic Mode (Master Hand is fought on easier difficulties) and Smash Arena, though Master Hand is fought alone in Arcade Mode. With just Master Hand, it seems like an easy fight, but with Crazy hand tagging along, the battle is even more intense and deadlier, with the two hands attacking at the same or teaming up to attack the player with high-damaging attacks. 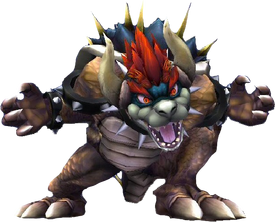 Giga Bowser is the gigantic, more monstrous form of Bowser who first appeared in Super Smash Bros. Melee as a boss that could be fought in Adventure Mode, and is the Final Smash of Bowser in subsequent games. Giga Bowser can be fought in Classic Mode as a secret boss, requiring a set criteria to be able to face him, replacing Master and Crazy Hand, and in Smash Arena as one of the few bosses that can be faced at the end. In both those modes, Giga Bowser is extremely powerful, being able to launch opponents far in a few attacks, and being able to tank almost all attacks without flinching. Giga Bowser is a boss who fanthoms the amount of damage he deals to players.

Cackletta is the main antagonist of Mario & Luigi: Superstar Saga, who steals Peach's voice at the beginning of the game to power her Peach-bots to awaken the Beanstar. While she does succeed in this, it appears to be she was tricked into stealing the wrong voice, and is defeated by the Mario Bros. as well, though she lives on as her own spirit residing in Fawful's headgear and then inhabiting Bowser's body later on. Cackletta appears as a boss in Smash Arena for the representations of the Super Mario series to face her. 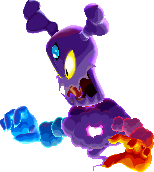 Cackletta's Soul is the form Cackletta takes inside of Bowletta, and is the final boss in Mario & Luigi: Superstar Saga. Cackletta's Soul is, hence her name, the spirit of Cackletta who resides inside Bowser's body after she takes possession of it (thus dubbing herself as "Bowletta"). Cackletta's Soul is a gaseous creature with two arms which she can use to conjure fire or electricity and a heart which is her weak point which opens up when her head and arms are destroyed. Cackletta's Soul appears as a boss in Smash Arena for the representations of the Super Mario series to face her. 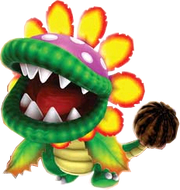 Dino Piranha is a boss that first appeared in Super Mario Galaxy, fought on one of the planets seen in Good Egg Galaxy in the aforementioned game. Dino Piranha, true to his name, is a Piranha Plant/dinosaur hybird, who is found inside an egg when Mario visits the planet he is fought on. Upon breaking the top off the egg, Dino Piranha's tail becomes visible and he starts wandering around slowly, and after spinning the ball on its tail, the shell breaks, and Dino Piranha's whole body becomes visible and starts attacking him. Dino Piranha appears as a boss in Smash Arena for the representations of the Super Mario series to face him. 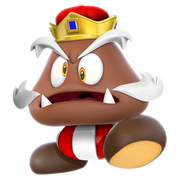 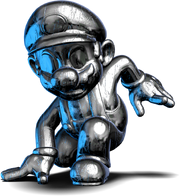 Metal Mario is the metallic form of Mario who first appeared in Super Mario 64, though the character in the Super Smash Bros. series first appeared in the original Super Smash Bros.. Metal Mario is known for being able to tank hits without flinching at low percents. Metal Mario is fought in Classic Mode as a mid-boss, fought before Master Hand (and Crazy Hand at higher difficulties) on Metal Cavern, but is also fought in Smash Arena. Metal Mario plays similar to Mario, but never uses any special attack other than his up special to recover and never dashes.

Retrieved from "https://fantendo.fandom.com/wiki/Super_Smash_Bros._Calamity_(OwtheEdgehog)/Bosses?oldid=2611045"
Community content is available under CC-BY-SA unless otherwise noted.