Super Smash Bros.: Going for Gold (SSBGFG) is a recently announced game set to release July 2015 for the Nintendo Thrii, a newly announced console by Nintendo that is a home console (Thrii H), a portable system (Thrii P), and a tablet (Thrii T).

Link [The Legend of Zelda]

Zelda [The Legend of Zelda]

Sheik [The Legend of Zelda]

Alfonzo (NEWCOMER!) [The Legend of Zelda]

Ghirahim (NEWCOMER!) [The Legend of Zelda]

Saria (NEWCOMER!) [The Legend of Zelda]

Impa (NEWCOMER!) [The Legend of Zelda]

Ganondorf [The Legend of Zelda]

This one-eyed robot can fight fast!

He may be psycho, but he knows more than you think...

People have wanted him back for 18 long years...
Add a photo to this gallery
Spoiler warning: Plot or ending details end here..

These are playable characters that are just giant. They may look big and scary, but they're slow and have a hard time attacking small opponnents! 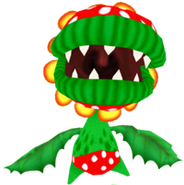 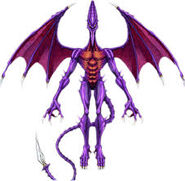 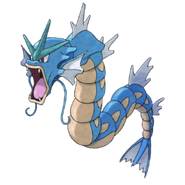 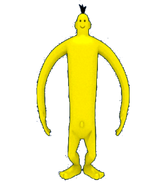 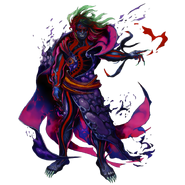 Even us with the BIGGEST hearts can turn evil!

Wow... that's one big robot!
Add a photo to this gallery

Three characters have been announced playable if you pre-order the game:

Shadow Mario (NEWCOMER!) [Mario]
Add a photo to this gallery
(Shadow Mario was only obtainable up to March 1st, 2015.)

These are the known amiibo-exclusive characters. They are all Pokemon, so they evolve as they level up, gain more custom moves, and the first evolution is always the figure:

Also, a figure that isn't amiibo and from another game has been announced to be compatable:

Paper Mario (3DS) [Mario]
Add a photo to this gallery 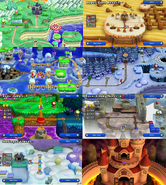 White Wisp
Add a photo to this gallery

Even though the game isn't yet released, Sakurai has stated some characters who were planned, but cut.

Originally, Red Pikmin, Blue Pikmin, Yellow Pikmin, Purple Pikmin, and White Pikmin would be starting characters, while Rock Pikmin, Winged Pikmin, and Mushroom Pikmin (even though it's not even a species of Pikmin) were unlockable characters, however they have been cut.

Another character considered was Tac. His neutral move, Copy, would scan a player and gain their neutral special attack. He would have that move for the rest of the match. While it wouldn't damage the player while scanning, it would do double its regular power when used on the copied character for the first time. He was cut because he was similair to Nabbit, his Neutral move was too similair to Krby's, and Sakurai didn't want to over-represent the Kirby franchise.

Another character considered was Princess Shroob and Shroobs. Princess Shroob would be a very weak character, but she would have five shroobs to protect her. She was replaced with Fawful because he had a much larger fanbase.

Another character considered was a Penguin from Mario. It would be in the DLC Pack Christmas, and its moveset would be based around the Penguin Suit from the NSMB series. It was removed because they thought that they would get critisism for including it.

Another character considered was Mike Tyson. Since they thought they would get critisism for including a real-life person, they replaced him with King Hippo.

Originally, Wiggler and Wii Fit balance Board were playable. Wiggler would be able to seperate himself, like one Wiggler did in Paper Mario: Sticker Star (with magic from Kamek), while Wii Fit Balance Board would have moves based of off Wii Fit's regular games, like Obstacle Course. However, due to critisism, they were removed and replaced with Koopa Troopa and Shop Keeper.

No one has been announced for this pack yet.

You may have seen evil, but this guy IS evil!