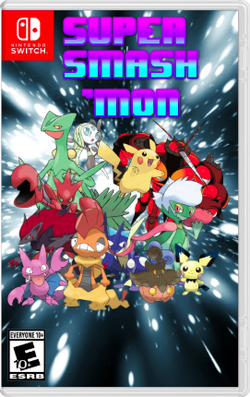 Super Smash 'Mon is a Pokémon fighting game, similar to that of the Super Smash Bros. series. It features many popular Pokémon along with their own unique attributes. The design of the game is a mix of Pokkén Tournament and Super Smash Bros. Ultimate. The game is developed by Odd Spores Studios, Sora Ltmd, Bandai Namco, Game Freak, and The Pokémon Company as a game for the Nintendo Switch system.

Most gameplay aspects are taken from the Super Smash Bros. lineup of games including percentages, stages, and other modes that appear in the Super Smash Bros. series. There are also old returning mechanics such as gliding and type-effectiveness. The game can be played as a fighting game with up to 8-Players, either as a team of 2-4 or just to duke it out in a free-for-all style of gameplay!

The player is able to battle by themself against a CPU character. They can choose the differences of gamemodes and stages by turning on and off items, choosing which stage to play on, choosing between time/stock/stamina mode and more. After every battle, the players earn a bit of PokéPoints.

A special mode in which the player can go through different routes, depending on the character they choose to play as. The route is different for every character and follows a singular theme or a certain mix of characters. At the end of each Classic Mode, the player receives prizes such as PokéPoints, Trophies, or Stat Boosters.

The Shop (which is run by a Purple Kecleon named Reddy) sells several different things. It sells Trophies, Stat Boosters, Alternate Costumes for Fighters, and Music. All of these can be bought with PokéPoints, which are earned through Battling, Classic Mode, or Wild Area Mode.

By playing the game (Battling, Classic Mode, Wild Area Mode, etc.), the player earns Trophies with various characters from the Pokémon series. They are collectable items and are the same as the Trophies originating from Super Smash Bros. Melee.

The player chooses their character of choice and is sent into a Wild Area. The Wild Area is a large overworld space that is free-roam, but has a barrier over it, so there is restricted space. The goal is to defeat Pokémon before time runs out and earn prizes. Defeating Pokémon gets you PokéPoints. You get more PokéPoints by defeating stronger and bigger Pokémon. For instance, defeating a Pokémon like Caterpie is easy to defeat, but will give you minimal points. Defeating a Pokémon like Golurk is difficult to defeat, but will you give you tons of points. Wild Pokémon can also fight back and do damage to you. If a Pokémon makes you faint, you lose a bit of PokéPoints and respawn somewhere else. Once time runs out, your PokéPoints are counted and you can earn prizes such as Trophies or Stat Boosters that can be used in the Wild Area Mode or on Competitive Wild Area Mode.

The training mode that is similar to Super Smash Bros. Ultimate's version. The player can test on a still CPU and can summon items and such to test out.

This is a minigame similar to the singleplayer Wild Area Mode, but instead takes place with multiple players (a max of 5 players can play). The Wild Area in Competitive Mode is much bigger and has more Pokémon. The goal is the same as the singleplayer mode, but you can attack other players and steal their PokéPoints! When time runs out, all of the PokéPoints from every player are counted and the player with the most wins! If there is a tie, a very small Wild Area called the Final Wilderness is made for the tied players in which they must defeat even more Pokémon. The Final Wilderness is only filled with super strong Pokémon such as Golurk, Magnezone, and Nidoking. They have greatly increased defense and attack, easily destroying weaker players. If a player faints due to a Wild Pokémon defeating them, they do not respawn and lose all PokéPoints. The player with either the most points by the time limit or the last player standing is declared the winner.

Similarly to Super Smash Bros. Ultimate, the game usually gets patches or bug fixes, but every update also introduces new fighters to join the roster. Below is a list of fighters that were added through updates:

Super Smash 'Mon was revealed during a Fantendo Direct as an upcoming release. All the information that the series had got was that it was in similar style to the Super Smash Bros. series of games and only included Pokémon characters, with previous Pokémon characters also appearing. The old Pokémon featured in the Direct were Ivysaur, Pikachu, Mewtwo, Pichu, Lucario, and Greninja along with the new characters Raichu, Gengar, Magikarp, Ledian, Sceptile, Blaziken, Swampert, Garbodor, Druddigon, Meloetta, Mimikyu, and Marshadow. The reveal had ended with a promise of over 50+ fighters with the main game along with later free updates that would include new fighters.

Below is a list of music that can be listened to on stages and in the music menu. Some tracks do not play on stages at all. Music can be toggled on and off so that it won't play in battles. You can also change the music that plays on the menu to your liking!

This list is about enemies that appear in the Wild Area Mode and Competitive Wild Area Mode. The enemies range from Easy, Medium, and Difficult. It also lists which Pokémon appear in which setting. In the Final Wilderness, only the Pokémon from the Difficult category appear. They will also have increased stats in which they can easily take down weak players.

= Summonable from the Poké Ball item.

Retrieved from "https://fantendo.fandom.com/wiki/Super_Smash_%27Mon?oldid=3255087"
Community content is available under CC-BY-SA unless otherwise noted.