At an item festival in the Mushroom Kingdom, the Koopa Troop attack and capture Princess Peach. Mario, Luigi, and the two Toads chase after them. Kamek appears right in front of them and casts a magic spell on them sending the four far, far from the Mushroom Kingdom. The Koopalings and the other minions of Bowser set out and face the brothers and the Toads.

After the long adventure to Bowser's Castle, the four find Peach but they don't find Bowser anywhere except a Switch in which they hit breaking the floor and sending them into an underground area. After going through the lava trenches, Mario and his freinds finally reach Bowser and battle him, after hitting the Switch and having Bowser fall into the pit. They traverse through the castle corridors once more and end up on the top of the castle outside. Bowser appears inside his Koopa Clown Car where the final battle begins. The brothers and the Toads defeat Bowser and save Princess Peach and go to celebrate, with that a new world gets unlocked.

Playing the game is just like any ordinary sidescrolling Mario game. It contains elements from the New Super Mario Bros. series and also reuses elements from Super Mario Bros. 3 and Super Mario World.The game takes place in the Mushroom Kingdom as usual. Instead of the game having three Star Coins it now has four of them in a level. Also Boost Mode is in the game so a fifth player can join in and use the Wii U GamePad to put colored blocks out to help the players. The game has the usual 8 main worlds plus a special world and features 5 secret worlds which can be unlocked by finding the secret exits in certain levels.

The Hammer Suit appears as well as power-ups from New Super Mario Bros. Wii like the Ice Flower and the Penguin Suit. Also the new power-up in the game called the Earth Rock can turn players into an Earthquake form. This allows them to jump onto the ground causing quakes which can defeat any enemies that are on the ground on-screen and make Coins fall that are on-screen. Yoshies can be ridden and Baby Yoshies can be carried. Baby Yoshies have the same abilites they had in New Super Mario Bros. U.

There is also a Hard Mode which allows players to play the levels with a shorter time limit and if the player gets hit they lose a life instantly. A few other differences is that some enemies and objects move faster.

Yoshis as well as Baby Yoshis appear in Super Mario World U. In the game Yoshi comes in Green, Yellow, Cyan, and Pink, and they all behave the same like in New Super Mario Bros. U. Baby Yoshis have their own unique powers and they can be taken along the adventure unless they are thrown or run into Lava, Poison Water or an abyss.

Enemies from Super Mario World return such as Chargin' Chucks and Dino Rhinos. Also there are a few new enemies.

There are a total of 15 Worlds, 8 main worlds, 5 secret worlds, and a special world. The World Map is a huge overworld with all the worlds connected, similar to Super Mario World and New Super Mario Bros. U. There are some returning worlds such as a grass world and a forest world. The game also features new worlds such as a haunted world and a sewer world. Each world has around 10 to 14 levels and the secret worlds have 5 levels total. There are a total of 132 levels in the game.

There are 6 secret worlds and can only be unlocked if the player finds a secret exit in one of the levels from a main world, the secret worlds each contain 5 levels. The difficulty is higher in the secret worlds and they do not feature enemy courses, fortresses, or airships and do not contain bosses. They usually take the player to the next world or the a world further ahead in the game. The worlds use letters A through E instead of numbers.

After the player gets all the exits and all the Star Coins in the game many changes will occur.

Music from older games such as Super Mario World are remixed for the game, and also, there is some music from other Mario games.

This is a section about the game and what should be added. I just want your opinions on it. 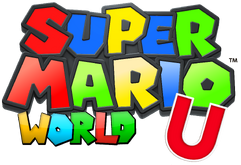 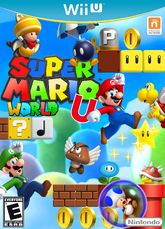 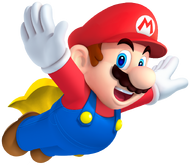 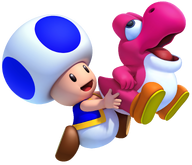 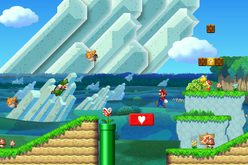 Mario and Luigi in Grassy Plains-1