Super Mario Team-Mania is the sequel of Super Mario Madness for the Evo-Gem, developed by Gear Games and published by Nintendo. While retaining the gameplay and the Character Switch system from its prequel, this game will have a different antagonist called Slanito, have Bowser and Bowser Jr. as playable while Kamek become a major boss and the Koopalings demoted into extra bosses in the final world's Boss Gauntlet for the plot reasons, and the Battle Mode where players will battle each others in one of the specifically made stages.

The gameplay is the same as it's prequel, and most of the mechanics from that game had returned such as the Tasks, but there are several additions such as the Team mechanic as well as Solo Power and Team Techniques.

Being on a team is optional, but is often useful as you may need a Speed character, a Jump character or a Power character, or even a character with a specific Ability or Solo Power to reach an area or to solve a puzzle. When one is blundered, the whole team can keep going until they reached a Star Checkpoint where their hit points are reverted to 3 (the usual maximum amount like in the Super Mario Galaxy games) and your blundered ally/ies will be summoned by a bubble. All characters on the same team shares the same total lives like in Super Mario 3D World; should the team wastes out of lives, no characters can normally comeback and all taken out characters can result a game over. When on a team, they can perform the Team Techniques like a Power Throw where a Power character can throw an ally to far away.

The Solo Special is a powerful technique and signature attack of the playable character. It can be either used to defeat a tough boss or to get rid of numerous foes, or to solves certain puzzles. In order to use it, the player need to defeat enemies to fill the Star Meter. It will empties once you use the Solo Power.

The Team Special is the same as a Solo Power but more powerful, especially in a group of four. The players need to defeat the enemies, collect Coins and perform successful Team Techniques in order to fill the Team Meter, and once fulfilled, it becomes possible to use it. Each character can hold a different Team Power, and can be switched as well as buy new one in shops.

The Abilities are special treats that most characters can obtain. These mechanics can make a character to go faster under certain condition, perform an unique attack by pressing successive button combination, and even detect the secret paths. Every characters have two default Abilities, but they can hold up to four different Abilities and can buy more from the shops.

Hat Gears and Body Costumes from Super Mario Odyssey had returned, and each character have a set of ten different costumes. While all of it have no major impact on gameplay, a few set of costumes are needed to obtain the Green Stars.

The Green Stars returns since Super Mario 3D World, and like before, they serves as collectible that are optional, but needed for certain places, such as some sections of a area being locked by Slanito's dark magic. Collecting enough Green Stars will also allows the player(s) to have access to the Super Levels, which are levels that are remade to become more challenging and are from various past games prior to Super Mario Odyssey.

Although the story is not on par of most Mario RPG games, the story had still be more prominent without getting obstructive into the gameplay.

This part of the story will only be revealed if you find the Story Page 1 or in the manual book/virtual instruction booklet. It starts with Bowser plotting yet another Peach kidnapping invasion, but does not know how to do it without having Peach to alarm Mario and Luigi or even have the two plumbers to know the event, so he wanted to make this more discrete upon hearing Kamek's advice. As Bowser's minions had become too busy to listen to him does to their even more intense training, Bowser had difficult time to make them listen despite his constant roaring of anger. He then noticed that a dark, purple perfume that surround them, and tell them what kind of parfume they had used as Kamek recommend them not to use them to avoid blowing their hiding skill.

It turns out that upon Kamek sniffing, it doesn't really smell anything but does take over Kamek's mind. Bowser eventually noticed that something is not right, but become too occupied to give them order. A dark Toad-like figure shows up and... Bowser had laughed, not expecting a Toad to have nerves to take on him with such "silly luxury clothing", but he eventually found out that the same Toad was the one who used the same perfume on them and ordered the brainwashed troopers to kick Bowser out of the castle, but the Koopa King refuses to surrender, but he does not wanted to injure too many of his men to not ruin his next invasion plan.

Bowser Jr. comes in, unaware of the event, mistook the whole event as a circus act by the purple Toad. Bowser warns him that it is not but that the dastardly Toad was behind it. Unfortunately for the two, despite constantly fighting back, get eventually get outgunned and outmatched, and quickly get kicked out of the castle. Bowser then cockily yell at the purple Toad that he will never find the castle's emergency rockets, which the Toad smugly order the brainwashed troopers to find the controller of these rockets.

Bowser, realizing that he said too much, attempt to jump on the castle to attack the Toad, but the castle's flight speed is too fast for him to hang on for long, and fall out to a river, and the Koopa King, with his son vexed from the event, furiously roars at the Toad, and the Toad proudly announce the beginning of Slanito's (which is his name) own invasion against the Mushroom Kingdom to get rid of him and Peach. Upon hearing this, Bowser become reluctant about what to do, but found out that since he is a Toad, Peach could know him, thus having no choice but to team up with her and the Mario Bros., even if he believe that it will be a pain to go through with them.

Each characters have a specific Solo Power and a stat of Speed, Jump and Power.

Although not directly controlled by the players, the helper of each World prior to World 9 can give a support for the player throughout the whole World, and each of them have their own attack shall the enemies tend to be nearby of them. The players does not need to worry about them getting hurt; they cannot be defeated and will jump back into action shall they fall into a pit, lava or similar hazard (although they will be visibly hurt). They also all appears in World 9 to help the players to dethrone Slanito until his first defeat.

Each worlds have around 10 areas, five of them being mandatory. Since each of them are huge, open sandbox world, the player can use the Transport Pipe to get into one area or another with much less time. Areas in bold means that those are mandatory before the Koopaling Door can be opened.

When the player finished all of the areas in a world, the Super Level of that world is available and completing it will give the player a Star Medal.

Some areas are not part of any worlds. Such areas will be named as "Borderline Areas", and are found between worlds.

This land can only be accessed if all of the eight previous worlds are completed.

The Special Star World can only be accessed if the player had completed all lands and collecting all of the 150 Green Stars. Unlike the other worlds, there is no Boss area and all levels are Super Levels, the last one being a revamp of Super Mario World's Bowser Castle. There is no Green Stars in this world.

These areas had no associated World/Land and are usually standalone or only connected to each others.

There are many enemies and bosses throughout Super Mario Team-Mania, each with their unique quirks. Each of them can be exploited to the player's advantage, and some can even be helpful in certain situations, such as Bob-Ombs allowing you to destroy Enemies with explosions. The Bosses found at the end of a area are also listed here, as well as the variations of each boss.

Costumes are cosmetic that changes the character's appearance. Most of them refers the older Mario games, and most of them are available by purchasing them in the Crazy Caps shops. Each character can wear eleven different costumes, with their default appearance counted as one. Most can be purchased with normal coins, but a few can only be purchased with Purple Currency. Slanito's speech also changes before the final boss battle. 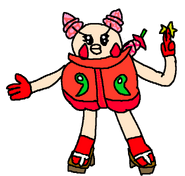 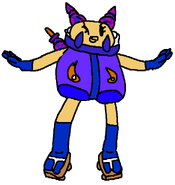 Kyu T.
Add a photo to this gallery

Retrieved from "https://fantendo.fandom.com/wiki/Super_Mario_Team-Mania?oldid=2690725"
Community content is available under CC-BY-SA unless otherwise noted.