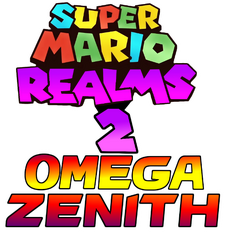 Super Mario Realms 2: Omega Zenith is a sidescrolling platformer and the sequel to Lone Planet's smash hit, Super Mario Realms. As the original game's goal was to liven up the 2D Mario formula, Omega Zenith takes that one step further and dives into even weirder and more obscure concepts. It is also the first Lone Planet title to be released on the Nintendo Polygon and Nintendo Push consoles developed by Step Ahead Studios in cooperation with Nintendo themselves.

Overall, gameplay of Super Mario Realms 2: Omega Zenith greatly resembles the previous game. The player must take control of a character and make their way through a wide variety of sidescrolling stages. There are multiple playable characters the player can choose from, each with their own different skills and abilities.

One new feature in Omega Zenith is the return of the Power Meter from Super Mario Bros. 3 and New Super Mario Bros. 2. To fill it up, the player's character must run without stopping. Once the meter is filled up all the way, the P Icon will flash, and the character will be able to run at maximum speed. A major change to the Power Meter's capabilities is that it now enhances abilities for any power-up, and not just the Raccoon/Tanooki forms like in previous games. For instance, filling up the Power Meter while using a Fire Flower will create a burning barrier in front of your character, allowing them to boost forward and defeat any enemies in their path.

In Omega Zenith, you do not need to go through the worlds in a specific order. You will be able to travel around a hub map and enter a Realm Gate to visit a world, like you can in Super Mario Land 2: Six Golden Coins; however, the bosses of these worlds must still be defeated to be able to access the final levels.

A while after the destruction of the Realm Destroyer, Aqualea's right-hand man Blue Bowser finds the legendary Cosmic Hammer and uses it to break holes in the barrier between Mario's world and an alternate universe -- Aqualea's home dimension where she rules with an iron (and sassy) fist. Mario and co. must journey into this new realm and team up with its rebels, led by two teenage girls named Maria and Luise, to put a stop to Aqualea and Blue Bowser's plans. All the while, though, they must watch out for the Iwatasaurs, a group of prehistoric monsters that have been revived by Aqualea's minions.

Retrieved from "https://fantendo.fandom.com/wiki/Super_Mario_Realms_2:_Omega_Zenith?oldid=3238066"
Community content is available under CC-BY-SA unless otherwise noted.