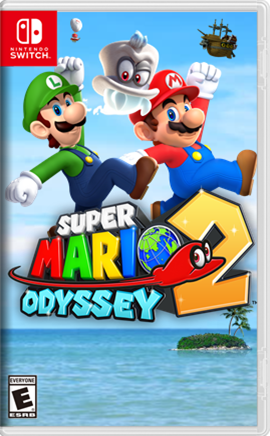 Super Mario Odyssey 2 is a platforming game for the Nintendo Switch released on 14th of June 2024. It is the nineteenth title in the Super Mario series, and it is the seventh 3D Mario title on a home console. As the name suggests, it is a sequel to Super Mario Odyssey, since it uses the same sandbox-like elements and design. The plot itself revolves around Mario and Luigi travelling across the other side of the Earth to more Kingdoms, in order to stop Bowser from trying to find the Statue of Love after learning that the wedding from the previous game was going to lead to the disastrous result of Peach's wish power being used for the destruction of the Mushroom Kingdom. The brothers also end up in a tangle against the Broodals' former boss and Madame Broode's ex husband Lord Fennington, who wants to kill Mario for bruising his former minions and kill Bowser for hiring them in the first place. While the story keeps the series' signature of simplicity, it does add some character development to the Mario brothers (moslty their love and respect for one another) and Bowser (giving him a back story explaining why he does what he does)

While the core gameplay of Super Mario Odyssey is still present within its sequel, there are some changes here and there made to expand upon the original. For one, Mario and Cappy are not the only playable characters, two more are playable, one being mandatory during intermissions between beating certain kingdoms, Luigi and Bowser, making a total of four playable characters. As the main two heroes, Mario and Luigi are the only two characters that have their own character specific weapons.

Unlike the previous Super Mario Odyssey, this game allows for three player co-op where the second player plays as Cappy, moving independently from the other players instead of hovering automatically over Mario's head. The three other players act the same as the first player, moving on the ground as they can use the second player to jump on for more momentum. Additionally, the live system is brought back, only instead of 1-UP Mushrooms, Life Bubbles fill this purpose as they bring the character back to the checkpoint they were at before they died.

Like the first Super Mario Odyssey, the sequel offers a variety of minigames.

Similar to Balloon World from the first game, which was a hide and seak type of game, players now have to hide different Star Coins from players, also giving them the option to trap players and make them waste their time inside of the traps, trying to get out. Wario and Waluigi run this mode as a public game from WarioWare.

Located within ShimmerRock Kingdom and run by the mayor of the Guinie Town, this mode revolves around the characters as they fight against various sets of enemies, increasing in speed and damage. At the end of the selected set is a scarier version of one of the bosses.

Located in the Ghost Kingdom, this is played during the Zombie/Boo war, where Luigi has to survive the war by using his Poltergust 6000 to suck up the Boos and break the zombies' jaws by hitting them across the faces. This can be replayed on the Minigame Machine in the Odyssey after transferring it from Professor E.Gadd's hard drive.

Unlike the previous game where the main gimmick was to buy clothes and caps at stores, the main gimmick of this game is to buy specific weapons and regional music insturments that unlock certain paths and please most people at big events, such as the grand opening of the McHicky Pub in the ShimmerRock Kingdom

The amount of kingdoms has been added up to twenty. Each kingdom, like the previous Super Mario Odyssey has a specific theme. Only this time, instead of being the usual Mario location desert, snow, forest, etc, a good portion of said kingdoms are heavily based on different countries across the globe, mostly on Europe. However here and there some are based off of other themes of media, such as religion.

The success and acclaim for Super Mario Odyssey as a best seller on the Switch lead to Nintendo EPD considering ideas for a sequel. Originally they didn't want to do a sequel as they didn't really want the project to directly compete with the first Mario Odyssey, which could've been updated with DLC at any time, but Shigeru Myiamoto insisted on making a sequel as he felt that he could challenge Mario and friends, more than he would ever do in a full feature film.

The developers looked for a more regional kind of look, something similar to what they did in Super Mario Sunshine, having realistic looking locations, based off of countries from Europe.