Super Mario Odyssey is an exploration-based platforming game released on October 27, 2017 worldwide for the Nintendo Switch. It was developed by Nintendo EPD and published by Nintendo. It is the eighteenth mainline Super Mario title, and the seventh original 3D title in the series.

The game starts aboard Bowser's flagship in the skies above Peach's castle. Mario and Bowser are in the midst of a showdown, as Princess Peach watches on with a mysterious Tiara on her head. Bowser throws his top hat like a boomerang, and it knocks Mario far off of the ship on its return. Gloating about his upcoming wedding with Peach, Bowser stomps on Mario's cap, which is then shredded by the ship's propellers. Cappy, seen following the airship at a distance, catches the shred with Mario's emblem and flies downward.

Mario has landed in the outskirts of Cappy's hometown, Bonneton, lying face-down on a grassy knoll. Cappy is poking Mario worriedly, but a sudden jump scares him away. When Mario catches up to Cappy, he informs Mario of Bowser's attack on Bonneton, and the kidnapping Cappy's sister, Tiara, for use as Peach's wedding headdress. Mario and Cappy agree to team up and use each other's abilities, including Capture. They scale Top-Hat Tower and defeat Topper, leader of the wedding-planning Broodals, revealing a power line to the Cascade Kingdom.

Once at Fossil Falls, Cappy finds an older airship, the Odyssey, that they could use to pursue Bowser. However, it needs Power Moons to repair itself and run. The duo summits Fossil Falls Heights and defeats Madame Broode and her pet Chain Chomp, Chain Chompikins, for a Multi Moon.

Mario and Cappy travel through several kingdoms, encountering the other Broodals along the way. They eventually catch up to Bowser in the Cloud Kingdom and defeat him in a battle. However, he is still able to shoot the Odyssey down, forcing a crash landing in the Forgotten Isle in the Lost Kingdom. Mario rescues Cappy from Klepto, and they find enough Power Moons to repair the Odyssey.

The next stop is New Donk City, which is being terrorized by Bowser's forces, chiefly the Mechawiggler. Mario and Cappy defeat it and restore poewr to the city. If Mario finds enough freelance musicians for her band, the mayor, Pauline, holds a traditional festival in honor of him and his history.

The duo attempts to reach Bowser's Kingdom, but Bowser intercepts them in Crumbleden and sics the Ruined Dragon on them. With another crash landing, Mario and Cappy must defeat the dragon. They then climb through Bowser's Castle, but are too late to stop Bowser from flying to the Moon. Before chasing after him, Mario and Cappy must fight the Broodals in their RoboBrood mech.

Mario and Cappy crash the wedding, but Bowser opens a trapdoor and battles them in the caverns below. Bowser impacts a load-bearing pillar upon defeat, causing the underground to start to collapse. Mario uses Cappy to Capture an unconscious Bowser and carry Peach on his back, escaping the collapsing core. On the lunar surface, Mario and Bowser simultaneously propose to marry Peach; Mario offers a Rocket Flower, and Bowser offers a bouquet of Piranha Plants. Peach rejects them both, leading to a brief moment of commiseration between the rivals, and boards the Odyssey with Cappy and Tiara. As the ship takes off, Mario and Bowser run after it, and Mario strands Bowser on the Moon by bouncing off of him to reach the ship.

The gameplay style of Super Mario Odyssey is officially stated to be a continuation of that of Super Mario 64 and Super Mario Sunshine, featuring open 3D worlds filled with collectible goals that must be obtained to unlock new courses. However, the collectibles are far more abundant; most are designed to be easy to find and obtain in a few minutes. Until the postgame, Power Moons only count toward unlocking the kingdom after their own, unlike previous games that used a cumulative total of the main collectible.

Super Mario Odyssey also ditches the hub world and lives system, with each defeat causing a loss of 10 Coins. Mario's moveset is expanded to include a roll and extra horizontal jumps by bouncing on Cappy.

The biggest addition to the formula is the Capture ability, which allows Mario to possess certain entities and use their traits and abilities to solve puzzles or complete platforming challenges. Mario can release a Capture freely, with rare story exceptions. Using Capture targets is crucial to obtaining many Power Moons and completing the game. 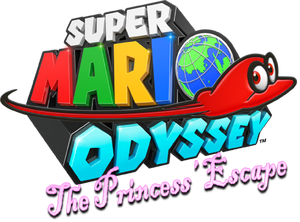 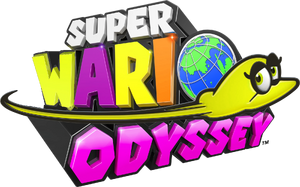 Super Wario Odyssey is a DLC campaign starring Wario, with a new moveset separate from Mario's, and features several new worlds and other new content. 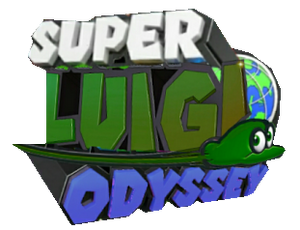 Super Luigi Odyssey is a DLC campaign starring Luigi, taking place during the events of the game. Luigi has his usual differences from Mario, such as higher jump and lower traction.

Super Mario Odyssey: Diddy Kong's Quest is a DLC campaign starring Diddy Kong. The campaign takes place during the events of the game and sees Diddy collecting Power Moons and his Kong friends, with different worlds having different goals to complete them.

Smash Kingdom is DLC for Super Mario Odyssey that adds the Smash Kingdom, a Super Smash Bros.-themed kingdom. This kingdom includes areas based on Battlefield, Final Destination, and Subspace Emissary, with enemies from the Subspace Emissary campaign appearing as well.

Super Mario Odyssey: Return is the sequel to Super Mario Odyssey. It introduces new inhabitants to the kingdoms that didn't have inhabitants. Cascadians for the Cascade Kingdom, Nimbusians for the Cloud Kingdom (The Cascadians and Numbusians are the same species.), Lucielle Losti for the Lost Kingdom, Draconoids for the Ruined Kingdom and Moon People for all of the areas on the moon.