Super Mario Odyssey is a game by Popple Co.. It is on the Nintendo VR. It is best known for multiple returns (Torque, Bumpties, Duplighosts, etc.) It recieved fairly positive reviews.

The playable characters (except Bob-omb Buddy and Geno), are all invited to Peach's castle for a party for her birthday. Mario passes through the castle, until multiple robotic claws crash through the window. It is revealed to be Bowser and his Koopalings (Ludwig, Lemmy, Roy, Iggy, Wendy, Morton, Jackson, Larry, and Bowser Jr.). The Koopalings use the claws to grab all the guests, sending them each to be guarded by the Koopalings' handpicked servants, known as the Koopa Kommandos. They are sent to different places, Bowser reveals his plan is to build a giant armada in the core of the ocean. He then kicks Mario and throws him into the distance, yelling "THE POWER STARS HAVE MADE ME UNSTOPPABLE!!!" Mario is sent to Boulder Beach at Green Plains, and has to battle the monsterous Koopa Kommando, King Crabber. After the Crabber is beaten, Toad appears with Mario, and agrees to help him to save Peach, and the Mushroom Kingdom! Mario finds a wrecked ship and finds a crew of Bob-ombs who were thrown onto the shore by the storm that Bowser caused when he stole the Power Stars. The captain, Bombor, agrees to help Mario go from Island to Island after the ship is powered up enough by the Power Stars. Mario then heads out for an adventure!

Soon Mario and Toad arrive at Maniacal Mansion, they see a strange wall, Mario must hit it with the Hammer Power-Up, and he discovers Luigi is shut inside a wall, but first he must beat King Boo the monsterous Boo. Using lights by bouncing off the mirrors, Mario eventually defeats the boo, gaining Luigi's character key. He unlocks the door on the SS Boom, and Luigi joins.

Bowser and his Krazy Koopalings

Bowser Island is the Final Level, so there are no things split up. There are six missions, each where you must battle a form of Bowser.

Levels Accessable From the SS Boom

Enemies are a big return in this game. They are divided into these categories. 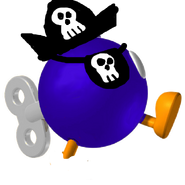 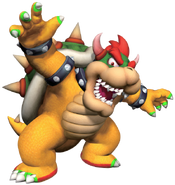 Deus Bowser
Add a photo to this gallery
Retrieved from "https://fantendo.fandom.com/wiki/Super_Mario_Odyssey?oldid=3024601"
Community content is available under CC-BY-SA unless otherwise noted.