It also hosts quite a breadth of new online modes, such as online course races with up to five people or collaborative building with five friends. The game has been said to be somewhere between "a dlc and a full-fledged sequel", adding onto the original as opposed to being entirely new (similar to Super Mario Galaxy 2).

Every day a different animation plays before the game boots up the title screen. Unlike the original, holidays are included too!

Tapping the letters does a bunch of quirky stuff, just like in the original. As opposed to the original, every letter (including SUPER) does something now. It also is meant to hint at some of the new features inside.

There are a total of five starting unique playable characters (with one unlockable character). Grabbing a mystery mushroom simply gives that character an extra hit while using that skin. All Mystery Mushrooms work with all characters.

Berries are a key part of "Yoshi Breeding". When a Yoshi eats five of one kind of berry, they pop out a egg with a Baby Yoshi of a certain color. These baby Yoshis can be carried by Mario to eat enemies. When a baby Yoshi eats three enemies, it grows into a full-grown Yoshi of that color. However, it'll grow up instantly if eats a Power-up. All berries can only be put on bushes. While Berries appear in styles without Yoshis, only in the Super Mario World and New Super Mario Bros. U style can these Berries be interacted with.

In the course editor, you can use these tools to assist in level building. These tools replace the cursor while being used. 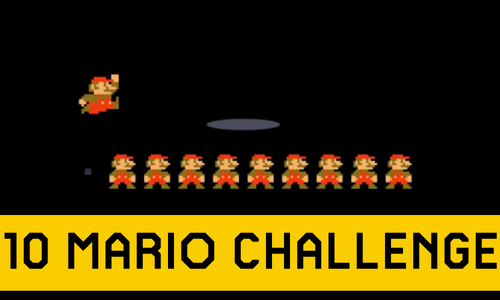 In 10 Mario Challenge, the goal is to clear 8 randomly selected sample courses with up to 10 lives. Players can obtain up to 3 1-Ups in each course, but must be able to complete the course to collect them. As many as 88 different sample courses appear in this mode, and they'll be added onto the Coursebot's sample courses list when completed. 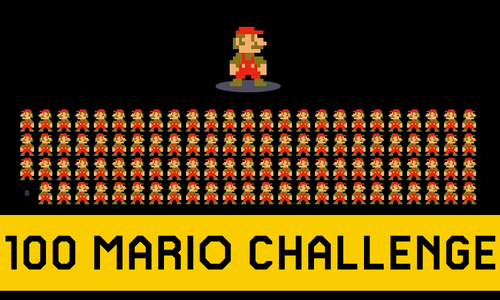 Also unlike the original, you can use Custom Cards during the 100 Mario Challenge run at the cost of a 1-Up you can collect in an level (you can pick up 3 1-Ups or use 3 Custom Cards). Custom Cards are obtained via a roulette wheel that appears after being a level. Typically the player has a 2/5 chance of getting one custom card per level, and a 1/100 chance of getting three custom cards per level. The player can also obtain 10 Coins instead (at a 3/5 chance rate). 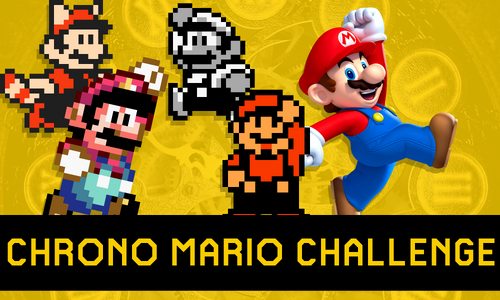 A new addition to the Super Mario Maker, Chrono Mario Challenge is a rather loosely told "story mode" of sorts that follows Mario and his friends as they are enlisted by a Time Princess named Fusee to go through various Mario levels and put time back in place after they were scrambled by Themis (the villian of Super Mario Bros: Multiverse Degeneration). This mode is derived from the 10 and 100 Mario Challenge modes, as you will go through a set of levels looking for Horostars. 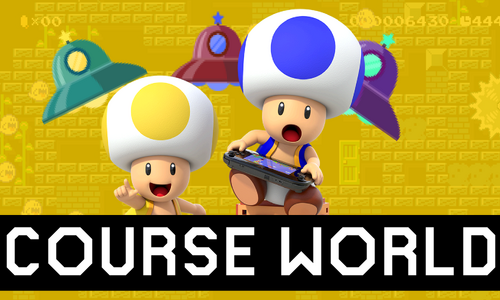 Course World is Super Mario Maker Phi's dedicated way to share course creations with the rest of the user base. Uploading courses is limited to 10 at first, but players will be able to earn the ability to upload more when they are given more stars by players or by earning medals through the 100 Mario Challenge.

A new change in this installment is that you can now tag your level with certain keywords as well as search up levels by creator name or level name.

In order to share a course online, players must be able to complete it, and have access to Miiverse. Players can download, play, and even alter courses made by other players, but they are unable to re-upload those altered courses to the online servers, as to avoid issues of stealing. Once a course is uploaded, players can comment on it, and/or choose to give it a star if they liked it.

Players can also bookmark courses on the official Super Mario Maker Bookmark website, then access the bookmarked courses in the courses section of Course World.

No courses are deleted in this installment if the creator chooses not to delete them; in Super Mario Maker, courses would be deleted without warning if they did not obtain one star within a set amount of days. This no longer happens.

Course World will also recommend levels to play. Levels that the player has given a star to will also have a .5 chance of appearing in the 100 Mario Challenge (up to three can appear in any given challenge run). 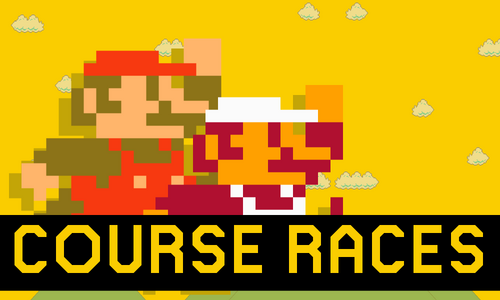 A new mode in this installment. Course Races follow a group of players (up to 5) competing through a level, attempting to get the fastest time. While each player can see the other's ghost, they cannot directly interact with them. Players can comment or drop out if they find the level too hard. Each level can either be decided by random or decided personally by the host of the room. 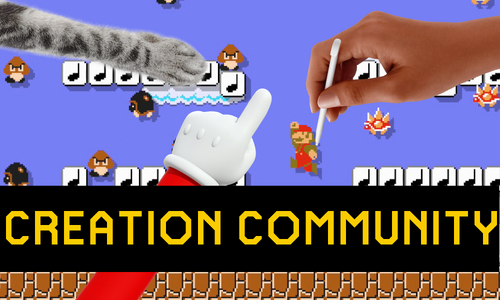 Another new mode in this installment. Creation Community allows you to edit and create your levels with your friends online, allowing for levels created by multiple people. Up to five people can edit the level in real time and the host can block off certain items to prevent spamming of unwanted objects. Additionally, one person at any time can play through the level, even if it is still being edited.

During the 100 Mario Challenge, the player can unlock Custom Cards when they beat a level (provided that they did not swipe it away for a different level) and use these customs for characters in a later run. These range from higher jumps, faster speeds, changing the properties of things like fireballs and raccoon tail, or changing the properties of blocks and power-ups. Custom Cards work very similarly to the way they do in Super Smash Bros. for Wii U and 3DS, as they only effect the player equipped with them and are used to customize the gameplay experience.

The player can only equip up to three (3) customs at once. Equipping a Custom Card costs you a 1-up slot (you can't collect three 1-ups in a level like you used to if you've equipped three customs at once). Custom Cards that contradict will grey out as you choose your customs.

There is a total of 50 Custom Cards in all.

Returning from Super Mario Maker is the Mystery Mushroom. All mystery mushroom skins can be unlocked through the 100 Mario Challenge/Chrono Mario Challenge on the various difficulties and you will always get a random skin everytime. You can also unlock these costumes through amiibo.

Costumes highlighted in yellow can only be unlocked when you unlock Fusee as a playable character.

These are Course Elements only unlocked through beating an event course. These are merely reskins of pre-existing course elements and can only be used in the SMB1 style. 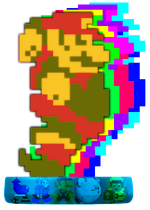 Technocolor Mario is a special amiibo that was created for Nintendo 30. When placed over the VRAPTOR, it gives the player a Technocolor Mushroom to use. When the Technocolor Mushroom is used, it turns Mario into his big form but with a new rainbow-colored trail of his shadow following him. In this form, he can speed through enemies to defeat them (as opposed to stomping them or other means) and run over pits, as if the air was solid ground. The form can't take damage and thus never reverts. This can be used as a level making tool; what you decide to do with it is up to you. 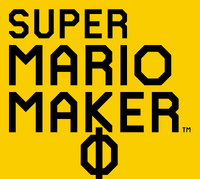 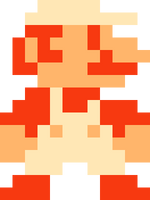 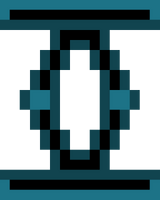 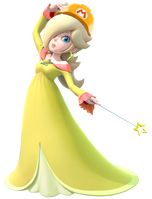 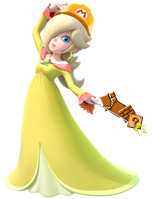 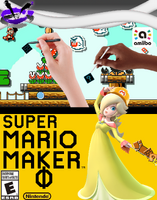 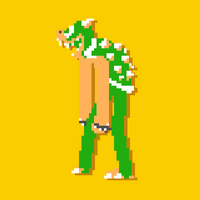 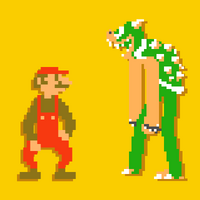 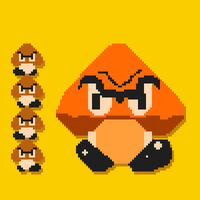 Promo art of the Super Goomba, compared to a four Goomba stack
Add a photo to this gallery

Retrieved from "https://fantendo.fandom.com/wiki/Super_Mario_Maker_Phi?oldid=3309989"
Community content is available under CC-BY-SA unless otherwise noted.