Fantendo - Game Ideas & More
Register
Don't have an account?
Sign In
Advertisement
in: Articles under Construction, Games, Wii U Games,
and 10 more

Not to be confused with Mario Madness

Super Mario Madness is a Mario game for the Wii U. This game has a different gameplay; Mario and other characters has three HP (like in Super Mario Galaxy but get six HP when getting a Power-Up) and goes through free-roam-styled worlds. While many classic enemies, items and Power-Ups return, there are also several new ones. It will also feature a new block called 2D-3D Block (also named Dimension Block) which switches 2D into 3D and vice versa. It will have 13 characters, which half of them must be unlocked first. Each Characters can uses 2 Power-Up each.

The enemies also have up to three HP this time, and the bosses now have six HP each, making boss battles more difficult. During a off-line gameplay, only one player can play, but in Network Mode, up to 6 players will venture together. It is only compatible for the Wii U GamePad. It will also introduce a whole new Koopaling; Alex Ember Koopa. There are one Koopaling in each Worlds (with the exception of World 4 and 8, which have two Koopalings and which will be fought first is random, and there is no Koopaling in Rainbow World) and were slightly taller than usual.

The game starts in Peach's Castle. Like in Super Mario 64, the character can roam around and choose worlds, but the player must complete World 1 in order to be able to go at World 2, 3, 4, 5, 6, 7 and 8. The 9th world is unlocked once all 8 Worlds are complete. If they complete the 9th World and clear all Star and Skull Stages, they will have access to World

Mario, Luigi, Yoshi, Wario, Waluigi, and Blue Toad must complete tasks in the Worlds. When they complete one, another will appear. When all tasks are done, a Koopaling Door will appear. The character will then face the respective Koopaling and get to another world if they win. There are also bosses in Tasks; Boom Boom, Pom Pom, Pow Pow, Petey Piranha and the others. Each characters have an ability and activate by shaking the Wii Remote or Nunchuck (for Wii U Pad non-helper player, shake the Wii U Pad).

Unlike popular belief, even in during 2D actions, the characters and objects retained their physical actions like in Super Mario 64.

Mario is invited by Princess Peach Toadstool. He goes through Intro Stage (based on SMB3 World 1-1) and passed though the gates. Mario has noticed that Luigi, Blue Toad, Yellow Toad and strangely, Wario and Waluigi are also invited. Toadette is also invited, but sees what's happening outside of Peach's Castle.

When a scream was heard, she quickly rushed inside without listening for Blue Toad who saying that it could be a trap. She screamed at her turn, making Mario, Luigi, Blue Toad and Yellow Toad alerted and get inside. Yellow Toad got there first but was taken down and kidnapped by Boom Boom. The other three get inside in their turn, chasing the rough henchman.

In the meanwhile, Wario and Waluigi sneaked inside and get in the basement. They wanted treasures more than everything, but when they are missing and replaced by paintings, the two greedy baddies noticed that the letter they received is a pure spam; it is written none other than Bowser. The two are angered and are about to get onto the first painting, the other three had arrived. They argured why Bowser had sended the letter to them and for what circontenses.

Suddenly, they heard Bowser's voice. "Your friends are prisonners of these painting worlds! Unless you are chickens, I dare you to get inside! My Koopalings, my son and I have traps and dangerous challenges for you! Gwa ha ha ha ha ha!!"

When the voice had ended, Yoshi arrived, angried because the evil Koopa king had stolen his fruits, and is ready to joins the five to get in the first painting. The adventure had just to begun...

A plain world with lot of Goombas and Bullet Bills. Morton Koopa is the World Boss, with his new, personalized supertank. The music is a country-styled remix of Super Mario Bros. 3 overworld.

A beach where Koopas and Beach Koopas pass their times during vacations. Blue colored enemies are frequent in this world. Don't let Larry and his Drill-Hat surprise you! The music is a Hawaii-styled of Super Mario World overworld theme.

A canyon with multiple Hammer Bros. species, and a waterfall that leaded to a secret area. Roy and his Fly-Cannon 2001 will make a destruction if you don't watch out.

A world full of ice enemies such as Snow Spikes. Wendy Ocean Koopa wanted you to have a chilling yet displeasant iceskating battle. Tim Johnstone Koopa also wants to be flatten with his new Koopa Clown Car.

A factory where Bulboos lives and where you meet the clever, agile and electrifying Koopaling: Alex Ember Koopa.

A big mountain with multiple giant enemies, and weaponary. Lemmy invite you into his circus battle.

An underground world full of Piranha Plants and it's sub-species. Not only Petey Piranha wanted revenge, Lavora Koopa will challenge you onto a serious battle...

An oversky world where Lakitus, Lakibombs, and of course King Bills are there. Ludwig von Koopa is ready to bring you down to the ground with his Stompeder 3001. Iggy Koopa will also challenge you with his long-dreamed, huge size.

Bowser's dimension, hence the name. Dolly P. Koopa wanted you for a dangerous battle with her Scareberry-Copter. Bowser is are waiting for the final battle inside his castle...

World: A wonderful world filled with Coins, rainbows...and enemies. Wart, attempting to get his minions back, is the last boss of this world.

Slide over an image for a quote 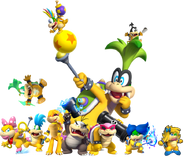 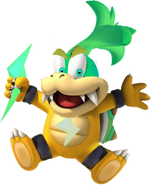 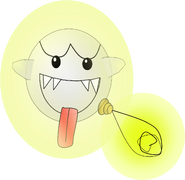 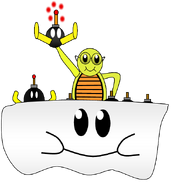 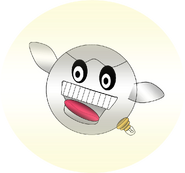 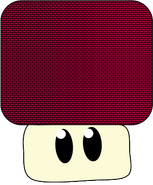 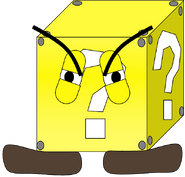 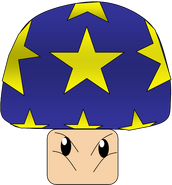 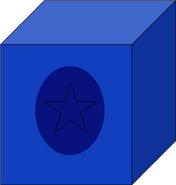 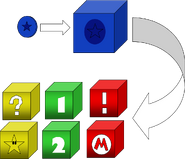 How does Blue Blocks Works