Super Mario MHL (Japanese: マリオオールスターのホッケーリーグ, Mario All-Star's Hockey League) is a Mario hockey game for the Nintendo Wii, Wii3D, and later, the FanPlay. It was developed by EEA Inc. and was their first released solo game and also had the best reviews out of any of their games. The North American and Japanese release dates were in December for Christmas shopping. It is rated E for Mild Cartoon Violence and Crude Humor. An official sequel was released in late 2009 called MHL 10.

Arenas are the places the teams play in. It was announced that there will be 21 arenas (not counting Mission Arenas and Normal Arenas) to play in. Some must be unlocked. They can be unlocked by beating the challenger in that particular arena in Challenge Mode. The player can make their own arena using the 8 boss arenas and name them. The player can make and save as many arenas as they want.

These arenas are for beginners. No obstacles have been added.

These arenas are more challenging. Many obstacles have been added.

These arenas are smaller than normal arenas. No obstacles have been added. They are only available in Mission Mode. They are mostly used for Tag Team Missions.

There are eight bosses. When the player has got far enough in Challenge Mode there will be boss fights. Each boss has a battle Coliseum based on what kind of boss they are.

Items are weapons that the players can use to help them win the game much like Mario Strikers Charged and Mario Super Sluggers. There are 15 items.

Mario comes onto Classic Ice Rink with his team: Mario, Luigi, Peach, Daisy, Toad, and Toadette. Wario then comes on the ice with his team: Wario, Waluigi, Donkey Kong, Diddy Kong, Birdo, and Boo. Mario does a slapshot and get a goal on Waluigi (It went passed him because he is so skinny). Wario and Waluigi accused Mario and Luigi of cheating. A few days later it was announced that the finals would be held in Peach Dome Garden. Wario and Waluigi had an idea to set up traps around the arena to trap Mario and Luigi and they did. On the day of the finals, Toadsworth, and Lakitu announced the teams, Team Mario vs. Team Yoshi: Yoshi, Baby Mario, Baby Luigi, Baby Peach, Baby Daisy, and Shy Guy. Suddenly the Koopa Sub burst through the top out the underwater arena and water flowed onto the dome. It was Bowser with his team: Bowser, Bowser Jr., Dry Bones, Hammer Bro., Magikoopa, and Toady. The crowd members were scared. Mario however was not scared. Then Bowser pulled out a Big Bob-omb. Wario and Waluigi (who where watching to see Mario get trapped) were so scared they tripped over the lever that started the trap. A brick fell on Bowser and he dropped the Big Bob-omb. As it started the count down the crowd members and team members left leaving Wario, Waluigi, and Bowser behind. Mario sided through the closing emergency doors, reached for his hat that fell of, and got out just in time. Wario and Waluigi tried to escape but got suck in the net that were trying to catch Mario and Luigi in. The Big Bob-omb Exploded sending Wario, Waluigi, and Bowser flying out of the dome. Cheep-Cheeps and Bloopers were everywhere. Peach called the Toads from Wario Factory to fix her dome. A Cheep-Cheep bounced off Mario. Mario says Mama Mia and the video ends.

Mario and Luigi are playing hockey when they find a note from Bowser. It was a challenge. It said Time for a hockey challenge. Winner gets the Princess, Gwa Haw Haw. From Bowser Mario and Luigi knew that if they didn't take the challenge, Bowser would just kidnap Peach. The bros. had, had enough of that. Lakitu came down and told Mario to get all the hockey players to join his team so that he would have a good variety of characters to beat Bowser's team. Bowser's minions were: Bowser, Bowser Jr., Dry Bowser, Dry Bones, Hammer Bro., and Magikoopa. Mario and Luigi went to work on collecting players to add to their team.

Mario and Luigi entered Grass Coliseum. Mario talked to a Goomba who he challenged and beat. Then he talked to a Paragoomba who he also challenged and beat. After beating the two Goombas a huge Goomba run up to Mario. It was Goomboss and he was chasing Wario and Waluigi. Wario told Mario that Goomboss was trying to stomp them. Goomboss caged both Wario and Waluigi and Mario battled him. after the huge Goomba was beat the two Goomba were really astonished that Mario had beat they master and joined Mario's team. Wario and Waluigi who Mario and Luigi saved also joined there team as well. Grass Coliseum disappeared.

Mario and Luigi entered Desert Coliseum. Yoshi was waiting for them. He told them that the Shy Guys and Fly Guys when being held captive but Petey Piranha and his Piranha Plants. Mario and Luigi beat all of Petey's Piranha Plants and challenged Petey Piranha himself. After Petey Piranha was beat, Shy Guy, Fly Guy and Yoshi joined Mario's team. suddenly a huge Piranha Plant came out of the quicksand and attacked Yoshi. Yoshi battled Sand Piranha and beat him. the quicksand disappeared and Birdo came out and joined Mario's team for saving her. Desert Coliseum disappeared.

Mario and Luigi entered Ghost Coliseum. Luigi was so scared that he run away from Mario. So Mario entered the mansion by himself but was not scared. Then he saw Toad, and Toadette running around scared and they told him that Toadsworth was trapped in King Boo's Room of the mansion. Mario found a Boo and challenged him and beat him. Boo lead Mario to King Boo's room. King Boo had Toadsworth in a painting. Mario challenged King Boo and beat him. King Boo's secret weapon, a huge Balloon Boo, the true boss of the mansion battled Mario and Mario beat him. King Boo then gave in and Boo and King Boo joined Mario's team. Toadsworth also came out of the panting and Toad, Toadette and Toadsworth joined Mario's team. Ghost Coliseum disappeared.

Mario and Luigi entered Ice Coliseum. They saw Baby Mario, Baby Luigi, Baby Peach, and Baby Daisy frozen in the ice. Andrew and Andrea told Mario that King Freezem froze the babies. Andrew and Andrea joined Mario's team. Then King Freezem who was frozen in the ice as well, broke out and battled Andrew and Andrea who told Mario they would beat King Freezem for him. The two robots beat the giant snowman and got a Fire Flower as a reward that unfroze the four babies. Baby Luigi told Baby Mario, Baby Peach, and Baby Daisy that they would be safer traveling with Mario and Luigi. So all the babies joined Mario's team and Ice Coliseum disappeared.

Mario and Luigi entered Rock Coliseum. They finally found Peach attached to a giant chain. Koopa Troopa and Paratroopa told Mario that the chain was attached to the long chain of the monstrous Chain Chomp, King Chomp. Mario, and Luigi along with the two Koopas followed the chain. The bros. also had to dodge the Chain Chomp, minions of King Chomp. At the end of the chain, King Chain Chomp was sleeping. The Paratroopa sneezed and the huge, Chain Chomp woke up and battled Mario. Mario beat the huge Chain Chomp and the chain broke saving Peach. Koopa Troopa, Paratroopa, and Peach joined Mario's team. Rock Coliseum disappeared.

After completing the roster of characters, Mario and Peach went right to Bowser Castle where they challenged Bowser and Bowser Jr. to a game. It is the hardest mission in the game to beat Bowser's team. After the long game, Mario and his team won. Bowser was so mad. All his minions, even Bowser Jr. joined Mario's team but not Bowser. Bowser transformed into a giant version of him, Giga Bowser. Mario did a boss battle and beat Giga Bowser. Bowser finally gave in and joined Mario's team. Mario and Luigi's team was finally complete. Video #2 was then unlocked and is played.

All of the players in the roster are settling down in Delfino Plaza after the tournament was over. They all watched as Mario and Luigi played Donkey Kong and Diddy Kong in a Tag Team Mission. The puck slide back and forth until Mario did a Superstar Slapshot and finally got a goal. The crowd cheered for the Mario Bros. That is everyone but Wario and Waluigi who were still mad about the incident in Peach Dome Garden with Bowser. Wario got out his cannon and launched him a secret weapon, a Chain Chomp. It landed of the ice and chased Mario and knocked over Luigi. Just before the Chain Chomp chomped Mario, Bowser and Bowser Jr. jumped down from the crowd. They were ready to help Mario. Bowser Jr. passed the puck to Bowser who did a Superstar Slapshot and hit the Chain Chomp with the puck. In flew up and hit Wario and Waluigi who landed into the cannon. Bowser shot a fireball and it lit the cannon and it shot them up into the sky and landed in the water and were seen being chased but a Cheep-Chomp. Daisy they invited everyone to come on Daisy Cruiser and they all rode toward the sunset. The credits then rolled.

Real collectible hockey cards (not like the ones collectible on the web like these [1]) were released on November 30, 2008. Each card has a code (Mario's is 284954836). The code unlocks a character info page on that character on Records Mode.

Super Mario MHL received many very positive reviews. The released with so many people buying it that it got a best seller logo on it. Reviewers loved that Mario finally played hockey on the Wii and Wii3D and had so many characters and arenas to play in. It got a 7.5/10 from IGN and an 8/10 from Gamespot. Steli Entertainment gave it a B+.[2] The game (as EEA Inc. hoped) sold well enough to have a sequel at the end of 2009 called Super Mario MHL: Series 2 which many companies were invited to work on. EEA Inc. said that if the rating /10 increases in the sequel another sequel will release in 2010. However, the sequel was a failure and was not what EEA Inc. wanted. After that, EEA Inc. refused to work on a sequel. Omegaverse Corp. then asked to sololy take over the game and it was accepted. After that, EEA Inc. decided to bring back the series with an official sequel to Super Mario MHL, MHL 10 which was released after EA Sports' NHL 10 in late 2009.

Yoshi, Peach, and Donkey Kong
Add a photo to this gallery 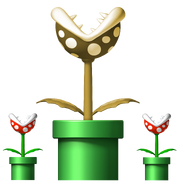 King Chomp
Add a photo to this gallery 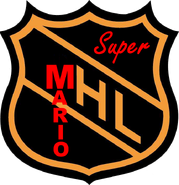 The Logo
Add a photo to this gallery

Retrieved from "https://fantendo.fandom.com/wiki/Super_Mario_MHL?oldid=3310059"
Community content is available under CC-BY-SA unless otherwise noted.