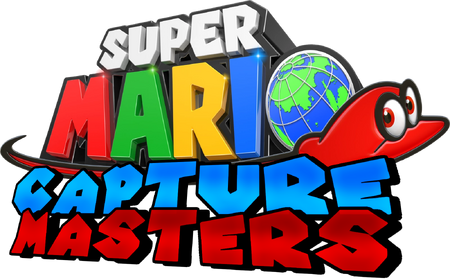 Super Mario Capture Masters is a fifteen dollar title that is a spin off of Super Mario Odyssey, starring Mario, Luigi, Peach, Wario and more with their Bonneter helpers. The game is not necessarily a platformer, but a title with a battle mode, a challenge mode, and a capture hide and seek mode. It will come out on both the Nintendo Switch and The V².

Super Mario Capture Masters is a title that uses the same engine as Super Mario Odyssey and it's DLC, with Mario, Luigi, Peach, and Wario retaining their moves and abilities from their past adventures. Their differences are explained in great detail in their own section. Every playable character has the ability to Capture by throwing their hat at a hatless object or character, allowing them to be controlled and used. The hats can also be used to create platforms for characters to jump off as well as a projectile to hit other players with.

Up to four players duke it out in a arena with nothing but their Bonneter to work with. The arenas are full of capture targets and items to use, with each player having either three or six health points to work with. Additional rules can be added.

These are challenges that test various Captures, with each challenge holding two Power Moons. These can be played solo or competitively with a group of four people. Collecting Power Moons will unlock more challenges and boss fights.

One player is enlisted as the Seeker, with three others being Hiders. Hiders have to hide from the Seeker, either by capturing items or NPCs. In this mode, all Captures lack the trademark signs that would otherwise give away that a object has been Captured. Additionally, there are several more Captures, such as Lamps, Birds, NPCs, even Signs, that are exclusive only in this mode. Each Hider has 3 health points; the Seeker can damage them using their hat. The Seeker must either find and defeat all three Hiders in 120 seconds or the Hiders win.

All characters can capture the same Capture Targets.

Logo for the game
Add a photo to this gallery

Retrieved from "https://fantendo.fandom.com/wiki/Super_Mario_Capture_Masters?oldid=3211093"
Community content is available under CC-BY-SA unless otherwise noted.