Super Mario Bros.: The Popstar Crossover is a 2.5D crossover game, it involves Bowser attacking the Mushroom Kingdom, which causes a portal to another dimension (Kirby's dimension) appear, Mario attacks Bowser, and Kirby attacks King Dedede, both finish them off, now they continue on their vacation after one moment, they investigate the portal, Kirby investigates the portal, who comes out of it while Mario investigates the portal too, who comes out of the portal, Mario is now trapped in Kirby's dimension while Kirby is trapped in Mario's dimension. It is platformed for: Nintendo 3DS, Wii U, it will be released on 2014 September 8 in North America, it will be released for Japan in 2014 August 12, and for Europe in 2014 August 11.

Mario is asleep in Popstar but wakes up, Mario thinks he is in a island, but he dosen't think he is on Popstar, Mario screams as he is in Popstar, he journeys to the Green Fields to find out what is happening there, before going there, he meets a person that is named Hunso, a person that guides everyone, they both journey together to the Green Fields.

Mario, Kirby, and Hunso decides to enter the portal that opened up after defeating Whispy Woods, then see a few Shy Guys coming out of it, they decide to take a look outside and see the Shy Guys taking over the Mushroom Kingdom, with Jetpack Guys, Airships, etc. They now decided to enter the portal.

After Mario, Kirby, and Hunso entered the portal, Shy Net kidnaps Kirby thinking it was Mario, now Mario sets off to the airships to rescue Kirby.

They've finally escaped the falling airships in destructed states, they go to the cage of where Peach was dropped, when they find her gone, Luigi sees a flying bony Magikoopa in shadow on broom, taking Peach away, Luigi asks Kirby, Hunso, and Mario that he saw a flying bony Magikoopa in shadow on a broom, carrying Peach away, now they chase him to a mysterious deserted cliff with the sphinx on it.

After defeating the Magikoopa, the sphinx opens it's mouth, and burps out chunks of sands, thus falling off the cliff, then Luigi saw a Ancient Tank and they ride it off the sphinx to get off.

When Luigi and gang riding the Ancient Tank back to the Mushroom Kingdom sees an army of rabbit-like Hammer Bros. that are called Rabbid Bros. that are attacking Toad Town, now tired of doing the same thing, they race to Toad Town so they can stop it.

Mario punches a Rabbid Bro. out of Toad Town, everything is normal until Mario notices that he must find a way to get Kirby back to his dimension.

Mario thinks that there is the Portal Shrine at the Bamboozle Forest and must journey to it, caution of Hunso's warnings, he warns Mario that entering the forest is very dangerous, but ignores Hunso's warnings and Kirby, Luigi, Hunso and Mario enter the forest, while Hunso is feared of the forest.

The Mario Bros. hammer the Three Hiders out of the forest and then discovers that there are 2 slots under the portal that are shaped like 2 Portal Gems, and Mario gets so depressed they go find them.

Mario and Luigi insert the Portal Gems inside the 2 slots, and the portal appears to open, Mario, Kirby, Hunso, and Luigi enter the portal, but the ghosts follow them inside, thus Kirby is back at Dreamland, but it gets in great danger and ghosts started attacking, so they need to get rid of them before the people of Dreamland fear the ghosts haunting them.

Mario and Luigi got Kirby back to his dimension, but Kirby falls out of another portal that leads back to the Mushroom Kingdom in the Bamboozle Forest. One day later, Luigi was walking past Peach's Castle when suddenly, Luigi saw a giant block-like golem that grabbed Peach, and jumped off the castle, and ran off with her, Luigi then informs Mario that a monster took Peach away, they go after the footprints of the golem that led them to Toy Block Palace.

After Mario hammers the vicious King Block Golem away, he grows back to normal size, but soon, the cliff it was on falls down, taking rest of the toy people with the palace, Kirby, Mario, Hunso, Luigi and Peach, runs from the castle, tonight later, they try to find a path back to the Mushroom Kingdom.

When Mario and the gang gets lost, they take a rest, however a shadow who has a tree head, and 2 cannon-like arms and a cape, arrives. Who splits into 5 and goes into their ears (But the other one goes into Kirby's mouth instead because Kirby has no ears), it cuts to their dreams, Mario, Luigi, Hunso, Kirby, and Peach are nowhere to be found, But Mario is asleep in his dream, taking place in morning at the same place where the gang was sleeping at, except Mario finds the gang gone, then he saw a Zombie Koopa rising from the ground, and he runs to a dream portal to go into another dream to find his friends in their dreams.

When Mario and the gang finishes off the shadowest Dark Tree King, he cracks into mirror pieces, and then Mario, and the gang wake up, they were back at the Mushroom Kingdom, but Cloudevils swoop in and take Peach away, Mario and the gang track down Peach to a scary town known as Spooky Town, they know they had to face their nightmares to find Peach in this town.

Mario and the gang go to a road where there are Cloudevils marching, (and so does other ghosts), they can't find Peach and might have to go through the town without being caught.

After defeating General Cloudevil, Mario and the gang get Peach out of the town, however, a few minutes later, they got away from the town, but a big Ztar swoops in and looks at either one person, then it chose Kirby, and takes over his body, and he flew away, Mario chases the possessed Kirby while the gang follow Mario.

When Mario chased the possessed Kirby, the possessed Kirby creates his portal, enters it and closes up, Mario had an idea, he goes to the Bamboozled Forest, reroutes the portal to an unspecified kingdom and enter the portal, meanwhile the gang follow Mario into that portal.

Mario hammers Kirby's foot that spits out the Combination Ztar, then it rages furiously, then it grows, it creates it's own body that is called "Ztowser", and creates a dark planet version of Popstar called Dark Popstar, who goes to that planet, Mario catapults himself to that planet along with the gang.

Mario and the gang, finds a pathway that leads to the palace of Ztowser, but they must go through the challenges they encounter.

Mario finally defeats the Combination Ztar, and it shatters into Super Darkstone Pieces, and scatters all over the world, thus the planet finally destroys itself, and Mario and the gang are back.

Kirby goes into the opened portal, Mario waves goodbye to Kirby as the portal flys up and closes. Then Mario enjoys his vacation.

Depending on how high the coin is, a medal of either bronze (low score), silver (medium score), and gold (high score) will appear, to get the golden one, you must at least earn a high score by finding a dark yellow Diamond Coin that scores 5,000 coins, and the coins (that are collected from a level) will be added to the money for shops.

Chapters represent worlds that has plenty of levels.

Chapter 1: Plumbers in the Wrong Place

Level 4: Down the Creek (Down the Lake in PAL)

Level 7: Down the Hatch

Level 9: Drag out Kirby (Drag out Puffball in PAL)

Level 1: The Fleet of The Attacking Shy Guys

Level 2: Smasher onto the Plumber

Level 6: Kirby Who was Captured

Level 7: Plaguery of the Airship Pt. 1

Level 8: Plaguery of the Airship Pt. 2

Level 9: On The Mouth

Level 2: Strike of the Rabbids

Level 3: Number of One of it

Level 9: Death to the Plumber!

Chapter 5: The Nature of the Bamboozle Forest

Level 1: Outside the Toy Tower

Level 2: March of the Toys

Chapter 7: Dreaming in a Nightmare

Level 5: Clash of the Dreamare

Level 8: Pick up a Monsterball

Chapter 8: Night of the Living Town

Level 1: The Haunting (March of the Ghosts in PAL)

Level 7: Ride through the Skull Hallway (The Ghostly Chase in PAL)

Level 1: Plaugery of the Village

Level Boss: Possessed Kirby (??? when not complete yet)

Level 1: The Olden Days (The Oldest Game in PAL)

Level 2: Journey through a Hole

Level 3: Blackmailing Woods (The Domain of Darkness in PAL)

These musics can be listened to in the Jukebox (Extra), the musics are unlocked by being played while fighting bosses.

King Shy Guy's Theme: The Battle Against the King

Ztowser's Theme: Is That All?

Credits Theme: It's The End of the Game

These musics can be listened to in the Jukebox (Extra), the musics are unlocked by being played while progressing through Story Mode.

Plumbers in the Wrong Place

Lake O' Pound, Down the Creek Theme: Creek of the Week

Peaceful Forest, Down The Hatch Theme: The Forest of Lost

Cuttin' The Wood, Drag out Kirby Theme, Inspiration of Pleasure Theme:  Just the Way it Was

The Fleet of The Attacking Shy Guys, Smasher onto the Plumber, Falling Parachutes, Kirby Who was Captured, Confronting the Army of Shy Guys Theme: Battle of the Shy Guys

These musics can be listened to in the Jukebox (Extra), the musics are unlock by being played/unlocked by doing the criterias or go to the Trophy Viewing Room.

They are rare short levels that appears in all of the chapters, this can be triggered if you touch an enemy on the chapter map. they can also be taken as a save point a a "home away from home" later in the game you will be able to decorate your "base" with various pieces of furniture unlocked by defeating bosses and with amiibo.

Shops are very short levels that appears in several chapters when you do criterias below, they contain buyable things that helps Mario.

Minigames are played on several Chapters and could be played with only Token Coins. Which are bought from Toad Shops for 100 Coins. S.S. Minigames - You can add Mini-Games here and add your nickname under the mini-game's name.

Legends: N - New, if a new minigame is added, it will have a N next to it, if updated, it will be gone.

The title card of When Toys Strike. 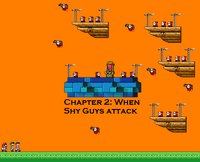 The title card of When Shy Guys Attack.

The title card of The Nature of the Bamboozle Forest. 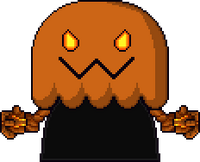 Dark Tree King, which appears in Dreaming in a Nightmare as a boss of it

The mechanical version of Dark Tree King
Add a photo to this gallery
Retrieved from "https://fantendo.fandom.com/wiki/Super_Mario_Bros:_The_Popstar_Crossover?oldid=2633498"
Community content is available under CC-BY-SA unless otherwise noted.