Super Mario Bros. 4ever is the fourth game in the Super Mario Bros. series and the first ever game by EEA Inc., released for the Nintendo Entertainment System. It was released in 1991, on the same year as the Super Nintendo Entertainment System. The game was discontinued in 1994, after the NES and was later re-released on the SNES because of it's popularity. The game includes a classic storyline of Princess Peach getting kidnapped by Bowser, and Mario and Luigi must save her.

Like Super Mario Bros.: The Lost Levels, Both Mario or Luigi can be selected when starting the game. The player also has the choice of doing Co-Op Mode in which Mario and Luigi can play the game at the same time.

After the player beats World 9, he/she will save Princess Peach and the game will be restarted. However, if the player finds the Warp Zone in World 8, the player can warp to World 10 but will still save Peach.

Soonbird gave the game an 8/10 rating, noting that "its co-op is remarkably genius", but also stating that it is just like any old Mario game. 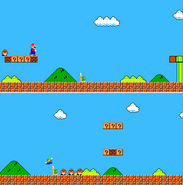 Mario and Luigi in Co-op Mode.
Add a photo to this gallery
Retrieved from "https://fantendo.fandom.com/wiki/Super_Mario_Bros._4ever?oldid=1962027"
Community content is available under CC-BY-SA unless otherwise noted.