The game's concept revolves around a "missing adventure" that Princess Fusee uncovers, with some of the missing chunks replaced with stuff that Fusee thinks would have made a good retroactive fit. The game's prologue, World 1, centers around Mario and Luigi getting back to the Mushroom Kingdom. The game also features Peach as a playable character, multiple level paths for some of the worlds, new kinds of level layouts, new enemies and a new power-up.

The plot was only described in the digital manual for the game.

Princess Fusee was doing some house cleaning in the Time Citadel when she encountered a entire missing chunk of Mario's history, adventures that were lost to every one in the Mushroom Kingdom. Fusee decided to restore this chunk of history but had to recreate parts herself using cloned portions of Mario's past. Not knowing anything about these portions, Fusee had to get a little creative...

Mario returned to Brooklyn after the events of Super Mario Bros. with Luigi, but yet yearned to be back in the Mushroom Kingdom, where he felt he had truly belonged. Although Peach had not been kidnapped, Bowser's forces were attempting to seize power throughout the entire Mushroom Kingdom, looking for the Red Artifacts. Mario, along with Luigi and Peach headed out to stop Bowser.

Super Mario Bros.: The Lost Worlds is split into eight brand new worlds, each which have four levels. Mario, Luigi, and Peach have to get to the end of each stage by either going down a flagpole, defeating a boss, or collecting a Horostar or Red Artifact.

The game has three modes upon starting it up: Mario Game, Luigi Game, or Peach Game. These modes are explained in more detail in the character section. There is no two player mode, continuing it's absence from Super Mario Bros.: The Lost Levels.

The game is a more open-ended experience, with some levels having multiple ways to end them. Additionally, the game allowed players to go back to levels they already completed through the use of reverse Warp Zones, which have a actual purpose other than to punish the player for exploring. The game has multiple secret paths that contain extra levels and unlockables. The game of course, has Warp Pipes that allow the player to skip multiple worlds if they please, but the player will have to play through the game in a multitude of ways in order to see everything this game has to offer.

There are three playable characters in Super Mario Bros.: The Lost Worlds; Mario, Luigi, and Peach. Both Mario and Luigi start the game the same way, although Peach has actually somewhat different levels when she begins the game. From World 2 onwards, they have the same exact levels.

Unique to a Mario Game, the first world of this game actually takes place within the sewers and a construction site. Peach starts the game actually somewhat in reverse, with her entering the construction site pipe and heading through the sewers. Mario and Luigi face off with Donkey Kong at the end of this world, while Peach has to rescue Mario and Luigi from the grasp of Donkey Kong Jr.

World 2 looks very similar to the first world seen in Super Mario Bros., but levels are more vertically inclined as opposed to horizontal. The boss of this world is Petey Piranha.

World 3 mixes land segments with underwater segments, and one level has a underwater exit and a land exit. Which exit you took decides which route you take in this world, although it eventually loops back at World 3-4 with a fight against Mad the Mermaid.

World 4 introduces a new power up known as the Poison Flower, which Mario, Luigi and Peach can use. It also introduces poisonous water that players cannot touch and a slew of new variants on old foes. The boss is Birdo.

World 5 is closer to a standard athletic levels, although the levels descend downwards. New enemies introduced are Pink Shell Koopas and Hammer Bros. The boss is Midbus.

World 6 introduces lava as a stage course element. Almost all stages take place at night over a series of bridges over a boiling pit of lava. Boos, Bookends, Sledge Bros, Lava Bubbles, Thwomps, and Stretch appear here as enemies. Massiboo appears as the boss.

World 7 features prominent lime and lemon colored skies, with mostly vertically oriented levels. Buzzy Beetles and Latikus (and by extension, Spinies) begin to show up as enemies in the levels. Captain Syrup appears as the boss.

World 8 is Bowser's Bastille, and easily the greatest challenge for the player. The levels include multiple boss-level threats with Blue and Red Bowsers, some levels even ending with Fake Bowser boss battles. The only new enemy is the Fire Bar.

When the player defeats Blossom Bowser, they open up the secret letter worlds. World A, World B, World C, and World D include new levels but no new mechanics or enemies. What is unique about these levels is that they contain Horostars instead of a traditional flagpole. Horostars appear in the player's HUD next to coins now. The player can also skip to World A when they begin a new game right from the start, as the player will now spawn on top of a black pipe with the letter A on it.

When the player begins World A, Fusee gives a briefing to the player about needing to find the Horostars to reconnect the adventure to the timeline. The player then must collect all the Horostars.

World B is similar to World A in that it mostly contains random assorted levels with no real theming.

World C is similar to World A and World B in that it mostly contains random assorted levels with no real theming.

World D contains the final levels of the game. Like Worlds A, B, and C, there is no real theme to any of these levels.

Once D-5 is completed, Fusee informs the player the timeline is now restored and that the game is complete. A golden statue of Peach, Mario, and Luigi are created. Captain Syrup can be seen in the background, although not acting... yet. 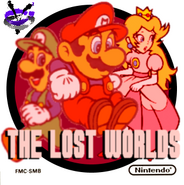 "Box Art"
Add a photo to this gallery

Retrieved from "https://fantendo.fandom.com/wiki/Super_Mario_Bros.:_The_Lost_Worlds?oldid=3211088"
Community content is available under CC-BY-SA unless otherwise noted.