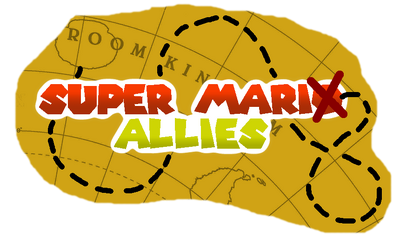 Super Mario Allies is a platforming game released for the Nintendo Switch, developed by Crash Co. It is the twentieth game in the Super Mario series, following Crash Co.'s previous Super Mario and the Underworld Trials. The game has a focus on "Allies", the characters that usually grant Mario abilities to help him on his adventures. As such, he has access to multiple powers and abilities depending on which ally is with him.

The game opens with Mario sitting on top of Peach's Castle, suntanning with sunglasses in his boxers. Nearby, Yoshi is eating some berries with Toad, and Toadette walks by, delivering Mario a glass of lemonade. Mario takes a sip from it and lays it on a nearby table. However, Mario sees a piece of paper fly by through the air. Mario leaps from his seat and climbs the tallest tower on the castle, leaping from it to grab the paper and landing on the ground.

Yoshi, Toad, and Toadette quickly climb down from the castle and run towards Mario. The four study the paper closely, revealing it to be a map leading to a currently uncharted island. Toadette says that finding the treasure to this map could be exciting, though Toad replies that they have no ship to sail. As they ponder the situation, Mario hears bells ring. He quickly runs towards a pair of binoculars and looks to the distance. He sees a black ghost ship arriving at the shore of the Mushroom Kingdom, which Mario recognizes as the Black Skull, a ship that helped Mario during his quest in Rougeport. Not before changing back into his regular attire, Mario runs to the beach, with his friends following.

When they arrive at the beach, they see several Toads, Yoshis, Tostareans, Underworlders, and more crowding around it as it begins to dock. Mario and co. push through the crowd and see Cortez appearing. He says that he is looking for a crew to travel to a new, undiscovered island for treasure. Wasting no time, Mario, Yoshi, Toad, and Toadette climb aboard, with Cortez recognizing Mario and welcoming him to the crew. Mario also meets other familiar faces; Flavio, Pa-Patch, Admiral Bobbery, and Vivian, as well as an Underworlder girl that Toad mistakes for Pearl, but turns out to be Topaz. Flavio tells Mario that he found a map and has organized an expedition to find the treasure. Toad mentions that Mario just found a map as well, with Flavio asking Mario to show him. Mario complies, showing the entrepreneur his map. Flavio says the two are identical, and takes both maps for himself for "safe keeping". The other crew members greet Mario and friends. Soon after, Cortez announces that they will now be setting sail for the island. Everyone mans their stations as the Black Skull sets sail, leaving the Mushroom Kingdom.

A few days later, the Black Skull arrives at the mysterious island. Once the ship docks, the crew steps off the ship, with Flavio requesting that Mario scouts the area while everyone else sets up camp. Mario heads out, but after exploring a bit, finds his old friend Cappy. The Bonneter happily greets Mario, saying that he and Tiara arrived from Bonneton in search of a map's treasure. He wonders how Mario got on this island too, but then sees Toad running up to let Mario know that the camp has been finished. Cappy asks if Mario is on a treasure hunt too, with Mario answering yes. Cappy then says he would love to join, but ended up losing Tiara somewhere and asks for Mario's help. He obliges as Cappy replaces Mario's cap, with Cappy reminiscing in their "good ol' days".

Mario eventually finds Tiara, but she quickly gets swallowed up by a massive jungle plant-like beast called Sporethorn. Mario and Cappy defeat the monster, setting Tiara free as well as a strange, golden arrow. Mario grabs it, causing a place on Cappy's map to begin glowing. Everyone returns to camp with Mario showing everyone Cappy's map. Flavio takes a look at it and says that the map may have radar-like functions, and may be pointing to somewhere. Tiara says that it happened when Mario grabbed a golden arrow, with Cappy suggesting they should find more of them. Bobbery points out that it's quite strange that there are three of the same map, but Flavio assures everyone there is nothing to worry about. As Tiara stays behind at camp, Cappy and Mario say they will head onward to find out where the arrow leads.

As Mario and Cappy collect more Doubloons from the surrounding area, locals from the island begin to join Mario's crew, looking for adventure. Soon, while exploring, Toadette comes to find Mario, telling him that a strange box just fell out of the sky at camp. Mario comes to investigate, and finds a massive blue package. Mario opens it and finds F.L.U.D.D., the water pack he used on his time in Isle Delfino. F.L.U.D.D. activates, recognizing Mario and saying that Professor E. Gadd sent him to help when he found out Mario was on an adventure. Strapping him on, Mario proceeds to collect more Doubloons with Cappy and F.L.U.D.D.

After collecting more Doubloons, a loud horn from Cortez's ship is heard. Mario, Cappy, and F.L.U.D.D. run back to camp to see what happened, with Cortez saying that there is another ship coming closer to the island. Flavio suggests that it's a group of thieves looking to steal the treasure out from under them, and commands everyone to come aboard and stop them. Everyone gets on the Black Skull as Cortez sails across the water.

As they get closer to the other ship, Cappy wonders what it actually is, with F.L.U.D.D. suggesting it may be a potential rival. Soon, a roar is heard, and the ship becomes more visible, having familiar patters and designs on it. Bowser then appears, roaring again. Mario then sees Peach held captive, tied on the ship's crow's nest. Bowser says that he wasn't expecting Mario to be on the island too, but that makes it his best day ever, as he will get to crush him, keep Peach, and get some treasure. F.L.U.D.D. mentions that Bowser must have gotten a similar map to the ones they have, with Cappy wondering how he got it. Peach calls for Mario's help, who leaps onto the ship with Cappy and F.L.U.D.D. The three work together to take down Bowser, and in turn destroys his ship. Using the Cap Throw and Rocket Nozzle, Mario grabs Peach and takes her back to the Black Skull. As Bowser's ship sinks, he vows revenge on Mario, saying that he will return soon. As he is submerged in water, another Golden Arrow appears. Mario grabs it and Cortez sails back to the island. They follow the new directions listed on the map and go to a different region of the island, having new areas to explore.

Super Mario Allies follows Super Mario Odyssey and Super Mario and the Underworld Trials in being a sandbox-based 3D platformer. The game sees Mario traveling through sandbox areas around the island. There are three main collectibles in this game; Star Doubloons, Doubloons, and Golden Arrows. Star Doubloons and Doubloons serve as the game's main collectibles; Star Doubloons are found within the game's main coursess while Doubloons are found throughout the island. The latter are easier to collect but there are much more to collect. Inversely, Star Doubloons have greater value but require more effort to collect. Meanwhile, Golden Arrows are collected on the overworld; upon collecting them, a new location will be shown on the map and, in turn, the island, allowing the player to continue. These are usually collected from beating major bosses.

In contrast to Super Mario Odyssey and Super Mario and the Underorld Trials, Mario's life meter has eight wedges akin to Super Mario 64 and Super Mario Sunshine, and s such different obstacles deal varying amounts of damage. However, like Super Mario Odyssey, there are no lives, and players simply lose 20 Coins if they are defeated. Purple Coins also make a return, and can be used as currency at Wario's Emporium or Waluigi's Traveling Stand to obtain items in a similar vein to Crazy Cap.

The game's central focus is the utilization of Allies. Throughout the game, Mario will team up with various Allies who help him on his adventure, granting him new abilities and attacks to explore the area and overcome obstacles. Through the push of a button, Mario can switch between his Allies at any time. Because of this, many of the game's collectibles can be collected in a multitude of ways depending on the Ally Mario has with him. Below is a list of Allies Mario can use, and their abilities:

Although Mario is the game's only playable character, several other side characters also play a role in the game's story. Many of them are members of the crew Mario is enlisted in, and some of them run services or can help Mario on his journey.

The island serves as the game's main location. It is split into six different parts, each of them acting as sandbox areas similar to the Kingdoms in Super Mario Odyssey. As such, they are quite expansive, and feature Doubloons that can be collected. In these areas, bosses can also be battled, which possess Golden Arrows to unlock new locations.

Within these areas are smaller sandbox courses, which are structured much like Super Mario 64 ad Super Mario Sunshine; players play through them and collect Star Doubloons, taking a similar mission structure to the two aforementioned games. However, the player has the option to exit the course after collecting a Star Doubloon or start the next mission immediately. They are notified when a new course is available or when a special event occurs, however. 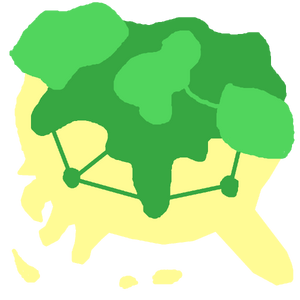 The East Region is the starting area, and as such is quite basic. It consists of a beach going into a dense jungle area. The higher areas of the region hold bridges that Mario can use for easy travel. There are also trees to climb on and a large cave to explore on the right side. Mario can also enter the water, and explore tiny islands on the coast.

Retrieved from "https://fantendo.fandom.com/wiki/Super_Mario_Allies?oldid=3066508"
Community content is available under CC-BY-SA unless otherwise noted.