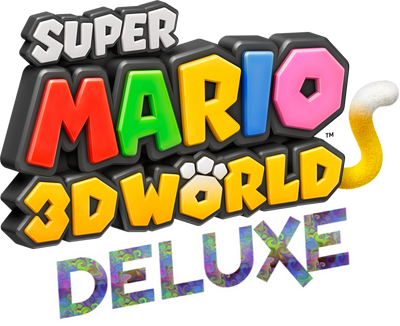 Super Mario 3D World Deluxe is an expansion to the Wii U title sharing the same name.

Several changes have been made, such as new powerups and characters. General balancing to difficulty has also been made.

Their celebration is cut short, however, as they notice a clear pipe thanks to Blue Toad's eyesight. Mario & Luigi do some handy plumberwork to fix the pipe in no time! The pipe shook and rumbled... and out came a million powerups, and a green fairy known as a Sprixie Princess!

She seemed more in panic about something else; the dastardly Koopa King, Bowser, has taken all of the other Sprixie Princesses hostage! Dark clouds emerge from the clear pipe...

Out comes Bowser! With haste, he grabs the Sprixie Princess and traps her in a giant jar! He glares at everyone, especially Mario, and slips down the pipe. Princess Peach was curious, so she was the first to go down. With everyone panicking, they enter the pipe, one by one, with Luigi being last.

They then travel the very long clear pipe into a brand new Sprixie Kingdom, and then they notice the green Sprixie Princess trapped in a giant castle in her jar! Mario and co. run for the first level...

A brand new mode added to Deluxe, Arcade Mode makes it's way to the game.

After beating Story Mode, this fast-paced mode is unlocked.

Arcade Mode puts you back into the adventure from step one, but there's a VERY clear difference; you can't save your game at all! Can you beat the entire game in one sitting?

The perks of Arcade Mode is that you won't have to collect Green Stars to progress.

Another new mode added to Deluxe, but only after beating Champion's Road.

Master Mode is like the normal adventure, but if you take a single hit, you die.

Enemies are much more frequent in this mode too.

Differences from the original

The game contains a wide selection of songs.

Kong Deluxe
Add a photo to this gallery 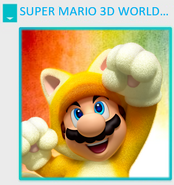 Old Boxart
Add a photo to this gallery 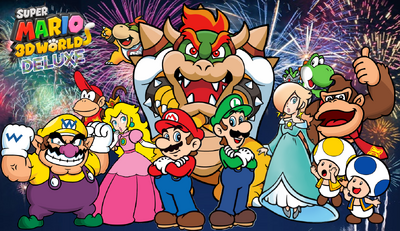 Retrieved from "https://fantendo.fandom.com/wiki/Super_Mario_3D_World_Deluxe?oldid=3215565"
Community content is available under CC-BY-SA unless otherwise noted.