Super Mario 3D Galaxy (スーパーマリオ3Dギャラクシー Sūpā Mario 3D Gyarakushī) is a game for Wii U, Zenze and Super Gamer, and it was ported to the Nintendo Switch. It's the third game in the Super Mario 3D series. It borrows most gameplay and powerups from Super Mario Galaxy.

It was a nice day in the Mushroom Kingdom. Mario and Luigi were walking around when suddenly Mario spotted an alien ship. Soon after, a scream was heard. Mario knew inmediately what was happening. The Bros. ran to Peach's castle only to find a weird device in the ground. When Mario tried to pick it, a hologram appeared that read:

"Mario, I have captured Princess Peach with my alien buddies and we will be holding her hostage. If you want to see her again, then you better come at us! Bwahahaha! Just kidding, I know you're too much of a wimp to come fight us!

- Bowser and the Aliens"

Mario and Luigi are shocked, but before they can do anything an alien appears and knocks them out with a laser beam. Luigi wakes up floating in space, with Mario nowhere to be found. Soon enough, something quickly grabs Luigi. He finds himself in Spaceship Mario, with Mario on board. That's where the game starts. 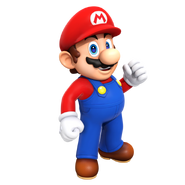 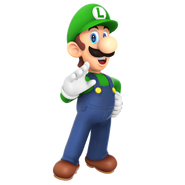 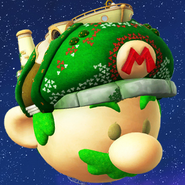 TheFireDragoon for the amazing Bowser letter (even though it was slightly modified).

Nibroc-Rock  from DeviantArt for the character renders, except Peach and Rosalina's whose artwork is from Nintendo.

EximiusMax for that AMAZING American/European logo.