In this game, the story revolves around Bowser trying to take the Magic Orbs of the Mushroom Kingdom, which are currently owned by Peach, therefore altering the kingdom to become hers. He has given 10 of the orbs to his Koopaling children, and kept the most powerful one for himself. He is now having Kamek help him alter the kingdom, and the player must defeat him before the Mushroom Kingdom is altered forever.

One day, at Peach's castle, Toad and Peach are up early making breakfast for them and the Mario Bros. Then, of course, Bowser comes in out of nowhere, with 14 of his Koopalings. He tries to kidnap Peach, but Mario comes just in time and transforms into Diamond Mario. Using his powerful diamond boots, he jumps on Bowser's head and knocks him into a coma. The Koopalings, angered, state how much they hate Mario and say that he'll regret his choices when they steal the Magic Orbs of the Mushroom Kingdom. Peach and Mario have doubts, considering that the cave containing them is heavily guarded, but Luigi, who just woke up to hearing all of the chaos, is worried.

About a week or two later, Bowser crashes his airship into Peach's house with 13 Magic Orbs in his hand. Peach and Mario notice, and Mario attempts to power-up, but Bowser gets away in time, yelling at Peach (international version), or cursing at her (japanese version). He then runs off, and a cutscene is shown showing him giving the orbs to 10 of his Koopalings and working with Kamek to unleash the final one's inner ability.

Toadsworth then explains to Mario the Magic Orbs' history. He says that long ago, before the Mushroom Kingdom was founded, 11 orbs guarding the area from evil were grown in the ground. He explains that the 13 orbs, which all wielded different elemental abilities, were very powerful and could defeat evil with the right forces. He then says that about 1.2 million years later, Peach found them, and, absorbing her nature, became adjusted to be owned by her, therefore making the Mushroom Kingdom hers.

Yoshis also appear in this game, marking their 2nd appearance in a 3D Mario game as a rideable steed (first was Super Mario Galaxy 2). However, this is their first time being used in a 3D game supporting a full multiplayer mode. In this game, multiple Yoshis are given to the players in multiplayer mode (similar to the NSMB series), but unlike the NSMB series, each Yoshi is the same color, to avoid unfairness between Yoshi abilities. Also, like in Super Mario World, there are different colored Yoshis woth different abilities. There are special fruits that give Yoshi abilities, like in Super Mario Galaxy 2. Lastly, Baby Yoshis appear as well, but act more similar to how they did in Super Mario World.

The Magic Orbs, which are a major part of the story, also appear as usable items. There are special tiles on the ground in certain levels that have the symbol of the Magic Orb it rleases. When Ground Pounded, it releases up to 4 orbs (based off the amount of people playing) , and those orbs can be collected to give the player special abilities. that can be used to complete the level. The tile for the Magic Orb will not activate if the user has collected the orb already.

There is also a Level Editor in this game, which allows you to create levels for other players to play, and to play other people's levels, although the two just mentioned require not only Internet, but a Nintendo Network ID as well. For more information on it, click this link.

Similar to Super Mario 3D World, stamps can be found in hard-to-reach areas of levels. When collected, a stamp of something (usually something that relates to the level it was collected in) will be added to the player's stamp list. Any stamps the player has collected can be used in Miiverse posts. Having all non-World Crown Stamps are also necessary to unlock World Crown.

The Level Editor is a feature in the game that allows the player to create their own levels using objects in the game. For more info, click the link above.

This game is compatible with Amiibo. However, only 4 types of Amiibo work with it. They all work to affect gameplay positively.

These are the effects Amiibo can give on the game:

This game is compatible with both the Super Smash Bros. 4 and Super Mario versions of the Amiibo. 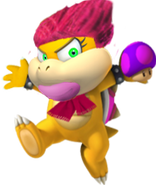 Blue Yoshi with wings gained from chewing a Koopa Shell.
Add a photo to this gallery

Retrieved from "https://fantendo.fandom.com/wiki/Super_Mario_3D:_Magic_Orb_Legacy?oldid=2515358"
Community content is available under CC-BY-SA unless otherwise noted.