Start a Wiki
“Super Mario is equivalent to the Big Bang of our gaming universe. If it were not for this blindingly spectacular creation, digital entertainment as we know it today would not exist.”
— Nintendo Power, Volume 230, November 2010


The Super Mario series, also simply called the Mario series, is a media franchise consisting of video games and other media published by Nintendo. Mario, the titular main character, is a fictional Italian plumber who lives in the fantasy realm, the Mushroom Kingdom, serving as its hero that saves Princess Peach from the Evil Clutches of Bowser. The franchise was created by Shigeru Miyamoto, and most of the series' games are usually created and released by Nintendo themselves, although other games have been developed by other companies under Nintendo's supervision.

The first game in the series was Donkey Kong, released in July 1981 for arcade systems. Since then, the Mario franchise has gained worldwide popularity, becoming Nintendo's flagship series and revolutionizing the video game industry. The mainline series of games are the Super Mario series series; these games are platformers, and mostly revolve around Mario going on adventures through the Mushroom Kingdom to rescue its ruler, Princess Peach, from the evil Bowser. Aside from these games, the series has also taken up multiple other genres: the Mario Kart series of racing games, a wide variety of sports games including Mario Tennis, Mario Golf, Mario Baseball, and Mario Strikers, role-playing games such as Paper Mario and Mario & Luigi, the Mario Party series of party games, and the Dr. Mario series of puzzle games. Additionally, an unnamed Mario movie by Sony Pictures Entertainment under Nintendo's supervision is scheduled for 2022. 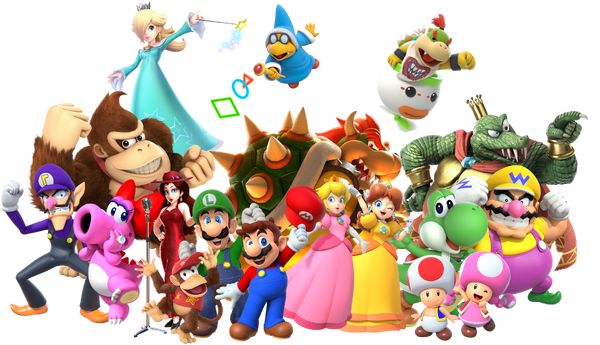 The franchise revolves around an extensive cast of recurring characters. Each of these characters have become iconic and popular in their own right, cementing them as some of the most famous video game characters in history.

This section lists characters made by fans of the Super Mario franchise. Likewise, these are introduced in fangames and/or fanfiction, and are not apart of the canon Mario series.

Aesthetically and tonally, the Mario series is almost always bright, colorful, quirky, and exploding with personality. The series also expresses themes of high fantasy, cartoon mayhem, and sometimes bizarre humor. While the colorful aesthetics and characters are highly appealing to children, series creator Shingeru Miyamoto has gone on record several times saying that the series is meant to appeal to players of all ages, especially families.

The storylines of the Mario games are very flexible, and usually take a backseat for gameplay. They can range from simple stories that serve to put the gameplay in motion (like the Mario platformers) to deeper stories that introduce new lore and characters (with the Paper Mario series and Mario & Luigi series being particularly notable examples). Most games take place within the Mushroom Kingdom, a land ruled by Princess Peach who is often kidnapped by Bowser and taken to his own kingdom. However, some games are set in locations outside the Mushroom Kingdom, such as Isle Delfino, the Underworld, and the various Kingdoms visited in Super Mario Odyssey.

Donkey Kong, released in 1981, was the first Mario game to be released. Shigeru Miyamoto created it when he was assigned to develop an arcade game that would appeal to the North American market. The game revolved around Mario (who at the time had no established name) climbing up a construction site while avoiding obstacles to rescue Pauline (who was named Lady at the time) from Donkey Kong, the title character. The game was successful, and spawned numerous ports on different systems after its initial release.

In that same year, Mario Bros. was released on arcade, and is credited as the first game to use the Mario branding. The game revolved around Mario defeating enemies in a sewer system by stunning and kicking them. This was not only Mario's first game as a standalone character, but it also introduced his twin brother Luigi.

In 1985, Mario became the star of his own sidescrolling platformer game, titled Super Mario Bros. The game centered around Mario's quest to rescue Peach (then known as Princess Toadstool) from Bowser, who had taken over the Mushroom Kingdom. This game introduced many core elements for the Mario series, such as the aforementioned Peach and Bowser, power-ups that Mario could use to become stronger, enemies such as Goombas and Koopa Troopas that would get in his way, different levels with unique designs, and the plot of Bowser kidnapping Peach. As of now, Super Mario Bros. is the best-selling game in the franchise, with over 40 million units for the NES version alone sold worldwide.

Several other 2D platformers followed, often introducing brand-new characters, power-ups, or game mechanics. Most of these games had simple level designs, and were especially linear earlier in the series. Several elements in these games would also become series staples, such as Shy Guys and the concept of throwing turnips in Super Mario Bros. 2 and several enemies, bosses, and power-ups in Super Mario Bros. 3. Starting with Super Mario World however, the games became less linear and more open-ended, mainly because of the introduction of secret exits that would open up new paths to other levels, and sometimes new levels entirely. Many of these concepts would later be reused in New Super Mario Bros. and its sequels.

In 1996, taking advantage of the Nintendo 64's hardware capabilities, the Mario series made its first jump into 3D platforming in Super Mario 64. This game allowed Mario to move freely along three-dimensional levels, as well as giving him new abilities, including the Triple Jump, Long Jump, Backflip, and Side Somersault. The game revolved around Mario travelling through various sandbox-style levels to collect Power Stars, often obtained by completing certain objectives.

Super Mario 64 was significantly less linear compared to the 2D platformers before it. Much like the 2D games, the 3D games continued to produce new titles, often introducing new characters and gameplay mechanics that add to Mario's moveset. For example, Super Mario Sunshine introduced F.L.U.D.D., a robot that allowed Mario to squirt water through various nozzles, either as a projectile or to help with platforming. Meanwhile, Super Mario Odyssey introduces Cappy, a Bonneter that possesses Mario's hat that allows him to throw it like a boomerang. He would also allow him to Capture other characters, possessing them and taking advantage of their unique abilities.

Any page that has [[Category:Mario Games]] on them will be added here automatically.

Retrieved from "https://fantendo.fandom.com/wiki/Super_Mario_(series)?oldid=3284800"
Community content is available under CC-BY-SA unless otherwise noted.