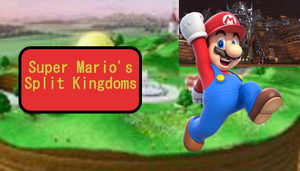 Super Mario's Split Kingdoms is a 3D-adventure game in the Mario series. It is the sequel to Super Mario Odyssey, but it features more of an RPG style story. There are several playable characters in the quest to defeat Splitz. The game was created by Hoola-Z Productions for the Golden System Z.

After this is complete a message pops up saying: More places are now available to discover, why don't you go check them out. There are always still more shines, moons, and power stars to get!

The gameplay is very similar to past installments, except it is now updated to fit the Golden System Z controllers. More on the controls TBA.

Throughout Mario's adventure, Mario meets countless allies and enemies. There are a lot of new characters, but many iconic characters make a return. Other characters than just Mario are playable, including Princess Peach herself. Each playable character has their own twist, like Peach's hover or Wario's double coin powers.

Characters support Peach, Bowser, or Splitz, but some are also neutral, they might be a little skeptical of you on your adventure.

On his way through his adventure. Mario meets 5 characters (3 required, 2 not required) that can be recruited. Each "helper" does something that helps Mario, like letting him jump twice in the air. Helpers can be equipped for their ability one at a time, similar to the Pixels in Super Paper Mario.

There are numerous destinations in this game throughout Mario's adventure. They are accessed by the returning Odyssey once they are unlocked by shines, moons, and power stars. There are five hidden areas that can be skipped and are not required to complete the adventure.

Super Mario's Split Kingdoms features several items from previous 3D installments in the Mario series. There are still a couple new items though too.

A Kingdom Bash is a Mario series inspired Splatfest.

In each Kingdom Bash, there are 3 teams, and players from around the world will choose a team, then play minigames for one weekend representing that team. At the end of the weekend, whichever team has the most minigame wins is proclaimed the winner. There is one Kingdom Bash every few weeks.

To be announced to the players, when they open the game, in the title screen they will receive a notification. If they choose to open the letter, it will tell the player the theme and the teams, and then it will ask them to choose a side. They are forced to choose a side to play online for the weekend of the Kingdom Bash. The players on the winning side will win an exclusive costume for each playable character.

Retrieved from "https://fantendo.fandom.com/wiki/Super_Mario%27s_Split_Kingdoms?oldid=3121035"
Community content is available under CC-BY-SA unless otherwise noted.