The Super Horn is an item that debuted in Mario Kart 8. It resembles a red Used Block with a yellow horn on its side. Despite it being rare and powerful, the racer in first place is more likely to acquire a Super Horn, as it can counter the infamous Blue Spiny Shell.

When used, the horn releases a deafening sound wave that knocks over racers and breaks any items in its radius, including the aforementioned Blue Spiny Shell. It only has one use, however, as it will disappear after being used.

Wario using a Super Horn to make Yoshi and Koopa Troopa flip out. 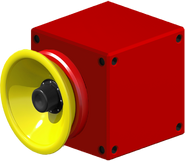