Super Goombas are enhanced versions of Goombas, given power through Big Mushrooms. They are towering, super-sized Goombas. They are notably incredibly tough, and are easily some of the strongest Goombas to exist, only paling in comparison to their subspecies. They are created when a Goomba takes a Big Mushroom. Incredibly rare due to the unlikely circumstances in which they will exist in, Super Goombas take three stomps or fifteen fireballs to kill.

Super Goombas are giant Goombas, canonically four times the size of a normal Goomba. They have a second scowl line and appear overall more orange in color than their original counterparts.

Super Goombas have boss-levels of health, taking a total of three stomps or fifteen fireballs to kill. They can also destroy most blocks in their path. They can also take power-ups to further enhance themselves, although this has only been seen possible with the Mushroom.

Super Goombas make their debut as a secret enemy in one of the game's updates. They can be formed in either the editor (by giving a Goomba a Big Mushroom) or when a Goomba comes in contact with a Big Mushroom during a level. They take three stomps to kill, or fifteen fireballs to defeat. They can smash through most blocks. 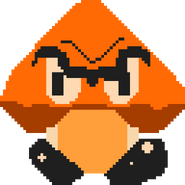 Retrieved from "https://fantendo.fandom.com/wiki/Super_Goomba?oldid=3210949"
Community content is available under CC-BY-SA unless otherwise noted.