The Super Crown resembles a four pronged golden crown with orbs on each of the pointed ends. It has eyes similar to a Mushroom or Fire Flower. In the center is a pink, polka-dot fungus.

The Super Crown power-up allows Toadette to turn into Peachette. Peachette has the ability to double jump, glide, and recover after falling into a pit, overall increasing Toadette's aerial maneuvers substantively. It lacks any kind of attack power unlike other flying power-ups, but it's capabilities aren't something to be doubted. This same function travels over for other Toads who obtain similar crowns that transform them into other princesses.

The Super Crown has sometimes been known to transform characters that aren't part of the Toad genus, transforming them into a female, Peach-like design. As an example, Princess Bowser. Technically, this can't happen in canon as anyone who touches the Super Crown that is not Toadette will merely get ten coins. Feel free to ignore it though... it's a fanon wiki.

As mentioned above, it can be used in New Super Mario Bros. U Deluxe to transform Toadette into Peachette. Not much is known about it.

In Crown of Horns, Bowser uses a Super Crown that was altered by Kamek to transform into Princess Bowser. Grappling with her new identity, she talks things out with Mario and Peach, a confrontation that actually gets Peach mad. Being able to resolve somewhat of their past conflicts and affirming that Princess Bowser plans to make this a permanent change, Princess Bowser leaves the scene resolved. Later, Mario and Princess Bowser kiss, a event that Mario is unsure of how to deal with by the end of the story.

In Toadette Crowns Around, the Super Crowns play a big part in the story, and is the way Toadette transforms things into princesses for her army, once thrown on an enemy or object, they will becoem a princess, usually with the items/enemy's name mixed with the -ette prefix for their name. A new type of Super Crown is also introduced, called the Ultra Crown, a crown that Luna wears to transform into Lunette and what Bowser puts on in the final boss to become Bowsette.

The Super Crown appears as a key part of the backstory of Princess Chain Chomp, or "Chompette," one of the playable characters in Incarnations: Umbral Endeavor.

The Super Crown is a placable power-up that can be used in Super Mario Maker Chi. It lets the player perform a double jump and the ability to float while in the air. The player can also boost out of pits, but cannot perform it two times in a row. It can also be used on Bowser, Boom Boom, and King Boo to transform them into new bosses. 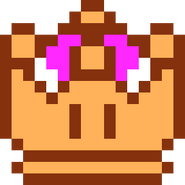 Retrieved from "https://fantendo.fandom.com/wiki/Super_Crown?oldid=3244411"
Community content is available under CC-BY-SA unless otherwise noted.