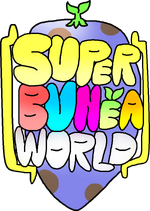 Super Bunea World is a game that is primarily a platformer with RPG, Beat-Em-Up, and Dating Simulator elements created for The V² by Toroko. The game features a entirely original world with original characters (save a single cameo by Zellen Harley Quimbleson and a bonus battle with Chain). The game stars a girl named Bunea who is on the run after she stole something, although the player isn't told what this "something" is for the majority of the game. The game revolves around her journey across various worlds, on the run. The player can go through several different routes both in level progression and in the story.

The game has been critically acclaimed, creating the successful Super Bunea franchise. A semi-sequel called Super Bunea Mayhem by Samtendo09 (t∣b∣c) was created for a Series Swap Day, beginning the Gaiden entries in the series. It was also re-released as a launch title for the TimeStrike Falcon. Super Bunea 64 would act as the true sequel for this game, following up much of it's events.

Super Bunea World is a platformer with a emphasis on combat. Bunea can carry around several weapons, swapping through them using the scroll wheel on the controller. Each weapon has a use rate that will slowly go down the more the player uses it, and will shatter when it's use rate is down to zero.

In underwater sections, Bunea has unlimited time underwater but cannot dash. She can preform various swimming strokes by pressing the dash button instead, allowing her to progress quickly through the water. She can also jump indefinitely under the water.

Super Bunea World features eight worlds, each with a different theme and enemies exclusive to that theme. Each of the eight worlds contain multiple levels, although the number of levels can vary from world to world. Bunea needs to make to the Edge of each world, and some worlds have multiple progression paths to get there. The Edge of each world also gives Bunea a heavy amount of EXP for getting there. However, each Edge of the world also contains a boss.

When Bunea reaches the Edge of each of the worlds, she must face off a boss. She is then treated to a dialogue box where she can talk it out with the boss. This gives the player some choices in how they treat bosses; they can either skip straight to the fight or attempt to talk the situation out with the boss. The player can also flirt with each boss. Should the player manage to befriend or romance bosses, they also can get help from them later on and receive gifts from them. The player can romance multiple bosses, although a polygamous relationship is harder to maintain and not all bosses that are charmed by you may be cool with it.

Should the player skip straight to the boss fight, they will have to fight against the boss and defeat them. Each boss drops a bunch of EXP as well as a Soul, which the player can collect to liquidize into even more EXP. At the cost of this though, it will become much harder to reason with certain bosses, although this might be the opposite case for some of the other bosses. 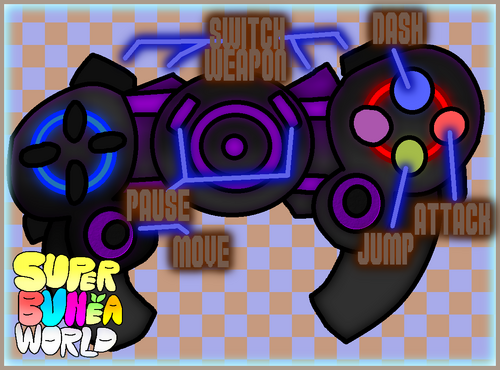 The game begins with Bunea exiting down some steps as some Edgy Eddies roll after her, but she quickly dashes away. The player can see her shift something into her hood as she does, and the adventure begins as Bunea dashes through the edge, landing in World 1: Chococarrot Charge.

From here, the adventure begins. Bunea progresses through the worlds at a breakneck pace, dealing with the bosses in her own way. More details on these encounters can be found in the respective bosses section.

Over the course of the game, the player will get hints as to what exactly Bunea stole from the building at the start. These are spoken by the bosses, although what exactly it is never actually spoken until World 7.

With World 7, it's a lot more obvious at what they're getting at.

After defeating Snowtato Slushlands and taking care of it's boss, it's time to take on the Exhausted End.

Should Bunea talk her out of her imperialistic nature, the Mistress of the Weird will free the worlds from her grip, although this development will take years to fully fix the damage she has caused. The Mistress of Weird becomes so distraught over her actions she nearly becomes suicidal, which Bunea has to comfort her out of. After this, the two will become friends, and if they player should pursue it, lovers. The game ends on a happy note, with Bunea finally being able to visit her home planet (along with those she has grown close to), although she states that she now feels the winds of other worlds begging to be explored.

Should Bunea fight the Mistress of Weird and defeat her and collect her soul (and if she has collected the rest of the bosses souls), she takes over the Museum of the Weird herself and redubs herself Vulpea, changing her outfit as well. This ends the game on a somewhat sad note, as Vulpea's personality shift causes her to keep the other worlds in their bottles, and even begins to bottle the ones up that the player has been through, becoming her own Mistress of the Weird.

Beginning with the assassination of a Galaxburgian, we first get a glimpse of Voidmato as a sniper on the rooftop of the Museum of the Weird. The alarms go off in the building, with the personal bodyguards being sent off after Voidmato. Voidmato pulls off a Void Grenade and returns to his shabby apartment, although when he gets there a demonic creature named Diablister informs him he has a debt to pay and that he has taken away what Voidmato finds most precious to him. Voidmato stares at the couch and gasps, with Diablister telling him to assassinate the Mistress of the Weird and the bosses of each of the worlds she has conquered, although this is mostly so Voidmato can grab their most prized possessions. Voidmato sets off.

After obtaining these prized possessions, Voidmato returns to his apartment, only to learn that Diablister isn't holding up his end of the bargain and taunts Voidmato into going to his home world, a small world hidden from view that is a flaming junkyard. The bosses locate Voidmato and intend to destroy him, but he tells them what his story is and what exactly Diablister is keeping from him. As he explains, he went to Diablister to procure a extra 50 dollars to buy his girlfriend, Roxanne, a gift, that being a stuffed toy of a Oni. He was unable to pay Diablister after the scheduled week, and as such Diablister has been keeping her hostage. The bosses decide to help Voidmato, but only if they all get to punch him, which he agrees to.

After arriving at Diablister's Junkyard Junction, Voidmato goes through the levels with the assistance of the nine~ bosses helping him through in their own unique way. Those are listed in the Junkyard Junction level listings. After finally reaching Diablister, Voidmato fights him and defeats him. The junkyard rig is set to explode shortly after defeating Diablister and grabbing Roxanne, the two barely escape the explosion. The two watch as it crumbles in the distance, sharing a kiss. Voidmato offers to take Roxanne on a date to Lydia's sushi resturant, and Roxanne agrees, following Voidmato as he uses a Void Grenade to head to Laser Lake. The story ends on a happy note as the two go on their date at the sushi restaurant.

While Voidmato and Bunea's stories go through the same worlds in the same order, Voidmato's story takes place after Bunea's and reflects this. Additionally, Voidmato has a couple of gameplay differences that effects his story.

While not really a "item", Vulpea gains access to summon the bosses for charged attacks by charging up her soul meter by defeating enemies. Every boss can be summoned since she now possesses their soul. 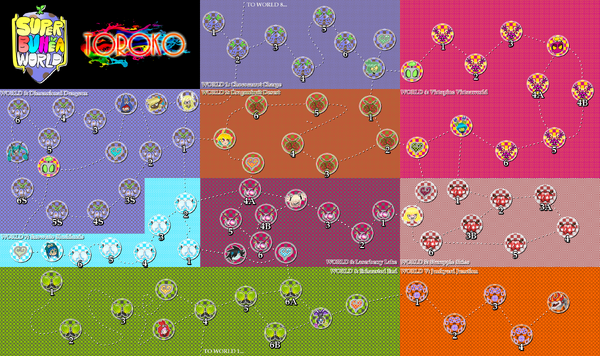 Each World has a set of five enemies that it introduces, with the exception of Exhausted End which introduces a whopping six and Junkyard Junction which only introduces two. Each enemy has their unique function and way of attacking Bunea.

This section goes more into details about some of the dating mechanics, who's compatible with who and other details.

After upgrading Dexa in Virtupine Virtuaworld, Dexapedia Notes become accessible the player and they can read them to gain more insight into characters from the game from Dexa's point of view. These are optional to read. Dexa doesn't write entries on characters that Bunea has killed, however.

A DLC addition that was added free in a post-launch update. This mini-game is only accessible after the game is complete and is hosted by the new NPC character Quinn Fooly.

Quinn Fooly's Balloon Land is a mini-game that can be accessed by talking to Quinn Fooly in revisited levels. The player can either ask to FIND or HIDE Balloons in the level.

In FIND mode, the player runs through the level under a 1 minute time limit, attempting to pop as many of the 100 balloons scattered by Quinn Fooly. The earnings and difficulty of the hiding places is toggled by the player before they begin.

In HIDE mode, the player hides their balloon with a 1 minute time limit for them to use, attempting to hide it somewhere in the level. Depending on how well it's hid, the Balloon will go up in rank the longer it goes unpopped. The Balloons will give the player a earning of half of the Borbz it's worth every time it's used in one of the runs.

amiibo can be scanned into the game in exchange for unique weapons. These weapons can also be earned in the game, although they only appear in late-game secret areas otherwise. amiibo cannot be scanned until World 3: Dimensional Dungeon, where the Zellen icon appears on the world map.

When encountering Zellen, she will ask you if you have any "amiibo Zhargees". If you ask what those even are or that you don't seem to have any, Zellen simply laughs and says that it doesn't exist in this reality. She will then ask to see some amiibo to scan through her amiibo Phone. You can only scan one of a amiibo once a day, although you can scan as many amiibo as you want. 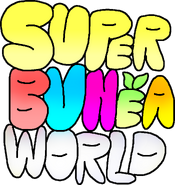 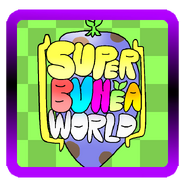 You can add your fan-art into this gallery if you make any!


Poll results will factor into the further development of Super Bunea 64 and future titles.