Super Bells are power-ups from the Super Mario series. They are used to give the player character a Cat Suit, granting them abilities like scratching.

The Super Bell looks like a striped golden bell, with two eyes. There is a shiny, white clapper on its inside.

The Super Bell will give the player character a Cat Suit. They can climb walls with it, and they can attack enemies with their paws in multiple ways.

In Super Smash Bros Blast, the Super Bell is an item. When used, it gives the player paws and cat ears. It allows players to scratch opponents, and climb up walls.

The Super Bell returns in this game.

This cat wears an eyeless Super Bell on his bandana. 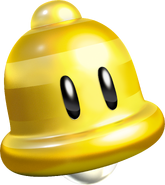 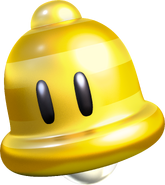 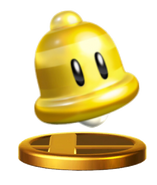 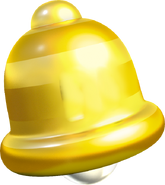 The eyeless Super Bell Up Up wears.
Add a photo to this gallery

Retrieved from "https://fantendo.fandom.com/wiki/Super_Bell?oldid=3226173"
Community content is available under CC-BY-SA unless otherwise noted.