Start a Wiki
SuperRex is a mutated Allosaurus that first appears in SuperRex (game). He was created by scientists for the California government and is the ultimate weapon on crime.

Being a mutated allosaurus, SuperRex is nothing like other Allosaurusess. He has longer arms that have 4 fingers instead of 2. He is much faster than a regular dinosaur and can jump great heights. He also has strength unnatural to that of normal dinosaurs. He can survive rockets and missiles, and not many things can match his raw power. He is capable of having weapons become attached to his body via the Armory. Not only that, SuperRex is also known for his high intellegence. Later on, he actually gains the ability to speak due to his high intelligence and learning ability.

With Los Angeles' crime problem getting worse, the government of California decided to create the ultimate weapon to get rid of all crime infesting the streets. So, a group of scientists engineered a biological mutation. They created a dinosaur using T-Rex DNA. But, the code was not yet complete. So, they used a small portion of chicken DNA to finish the code, and added some modifications to the DNA, and SuperRex was the result. He was then sent out to destroy all criminals, the way a mutated dinosaur would.

SuperRex returns, and faces his greatest foe yet: Another SuperRex, this one is called Rex 2.0. This one was created to enforce the law better, but this one is unfriendly and turns on humanity after believing the humans see him as nothing more than an experiment for thier own gain. He steals the Dinosaur DNA that created him and injects it into several humans, mutating them into dinosaur mutants. He infects much of the city's population, overrunning the city with mutant dinosaurs. Only SuperRex can save the day.

SuperRex appeared in Episode 8 of Fantendo Death Battles. He will fight Tom .

SuperRex returns in Genoside, a game that drastically differs from the original game. It was created by Overclocked.

A trailer by Locky (t∣b∣c). 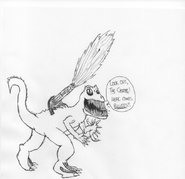 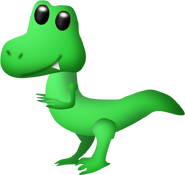 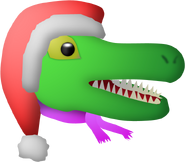 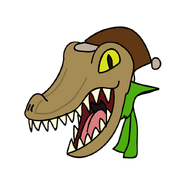 SuperRex's Christmas Mugshot by Arend (t∣b∣c)
Add a photo to this gallery
Retrieved from "https://fantendo.fandom.com/wiki/SuperRex?oldid=1785902"
Community content is available under CC-BY-SA unless otherwise noted.