Sunset Maiden is a Metroidvania-styled game with RPG elements developed by Pyro Enterprises. Inspired by games such as Hollow Knight and Dark Souls, as well as the developer's childhood favorite game Monster Tale, the game aims to be Pyrostar (t∣b∣c)'s unique take on the genre.

The story of Sunset Maiden is largely open-ended and told via environmental storytelling, with occasional optional flashback events accessible through intense exploration. Only certain parts of the story are ever outright shown to the player.

The story begins in a dark room with multiple dry docks, a massive hole in the wall open to a bright orange sunset. No intact vessels can be seen anywhere in the room, but multiple vessels of unknown make and model are shown broken down and incomplete. A woman in strange clothing is shown walking across the water's surface, entering the massive empty room. She gazes into the darkness as a strange fairy-like creature emerges from her chest, and the two head off to explore the ruins they have just appeared in.

This memory sequence seems to be a flashback to a younger Malya running through the streets of Central Lune City, the streets far brighter and more populated than before. Players navigate her through the area, talking to NPCs and being able to purchase food with a limited supply of money. However, all NPC dialogue is glitched and corrupted, making it unreadable. Purchasing food serves no purpose.

The end of this memory sequence occurs when the player navigates to the entrance of the Chained Tower, where she encounters men and women admiring a large mechanical object. The sequence ends prior to the object doing anything.

This memory sequence follows an older woman, who does not seem to be Malya. The player is tasked with guiding her through a special section of the Arboreum and fending off enemies utilizing only a short sword. Some injured NPCs appear, but again, their dialogue is glitched and unreadable. The woman only takes a single hit before death, and death restarts the sequence.

The end of the memory sequence occurs when the player makes it to the end of the section. The woman encounters an old man in regal robes, surrounded by the same enemies she has been fighting. Stunned, the woman drops her weapon as the man points to her, causing the enemies to swarm her.

The general bulk of Sunset Maiden's gameplay is a traditional Metroidvania game; players explore the vast ruins of Palacio de Sol from a 2D sidescrolling perspective, collecting artifacts to grant you new abilities and upgrades, and return to old areas with new skills to unlock more parts of the world. Along the way, players are meant to piece together the game's story, slowly progressing towards one of the three possible final bosses.

Combat is built around fluid combo attacks and has a large aerial focus, as player character Malya does not possess much power. The player has an assortment of options in combat with every weapon, consisting of a basic combo, launching tilt attacks, an air attack, and a "special" option that varies between weapons, typically being a projectile. The player can equip one weapon at a time as their main form of attack, and easily switch to other weapons assigned to one of two "Quick Switch" buttons. This enables players to concoct a variety of combos on the fly, reacting to situations through any means they choose.

By slaying enemies, Malya generates a resource known as SP. SP, being a form of energy, is useless until Malya's death, in which case her ally Wisp can inject her with it and use it to augment her. SP can be utilized to purchase a Perk in order to help increase Malya's strength or grant her special abilities, or it can be converted into gold to be spent on other items in shops. 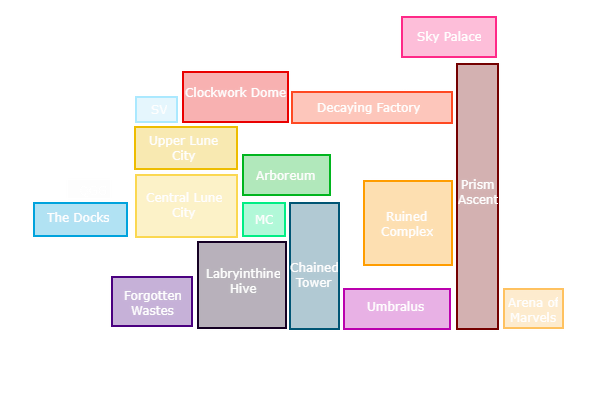 Retrieved from "https://fantendo.fandom.com/wiki/Sunset_Maiden?oldid=2896507"
Community content is available under CC-BY-SA unless otherwise noted.