You may be looking for Sunnyscythe (Other Path Universe) or Sunny, the Half-Child half-demon based of Sunnyscythe that appears in Fantendo - Wounds of Time.

Sunnyscythe is a childish and psychotic Pichu who served as Litle P's arch-rival He has a history of attempting to gain immense power; this is probably because he loathes his frail pichu body.

Sunnyscythe's first chronological appearance is in the flashbacks of Sunnyscythe Plays War. He is one of three baby pichus cloned from the DNA of Mr. P by a pair of rogue scientists. One of these pichus is supposed to be adopted by Mr. P; he and his wife are unable to have children of their own. Unfortunately, one of Fantasma's minions implants a computer chip into Sunnyscythe, planning to force him to kill Mr. P. The chip malfunctions and Sunnyscythe is driven mad. One of the remaining two pichus is adopted by Mr. and Mrs. P.
Sunnyscythe later appears alongside Litle P, imprisoned by a short-lived villain called the Freakmeister. When they are freed, Sunnyscythe is adopted by Mrs. P. However, when she sees Sunnyscythe manipulating and hurting Randy and Lotey Chrysaline, she kicks him out. This intensifies his vendetta against the P family, which would become one of his defining characteristics.

Eventually, Sunnyscythe looks to The Enemy for a chance at being accepted into society once more. The Enemy claims that he will give Sunnyscythe what he desires if he (Sunnyscythe) will kill The Fan. The Enemy gives him a power-absorbing scythe that allows him to drain the energy and consciousness of anyone he stabs.
After killing the Fan with his new weapon, Sunnyscythe is betrayed by the Enemy. Angry, Sunnyscythe kills the Enemy as well and absorbs his life force, causing him to grow extremely powerful.
His body is unable to sustain the power, so he enslaves the inhabitants of Castle Street and forces them to build a robotic body for him. The body is damaged during a fight with Unten, after which Mrs. P uses the scythe to destroy the body and absorb Sunnyscythe's life force and all of his powers, resulting in his death. She releases the energy into the ground, spreading and unintentionally reviving Sunnyscythe. He dies again fairly quickly, when he gets stabbed by Sandslash P and impaled on a piece of wreckage.
Sunnyscythe's body was cremated, but Sunnyscythe's consciouness remained alive, possessing Mrs. P's body.

Shortly after Sunnyscythe's apparent death, Fantasma confronts Sandslash P, who is looking for Litle P, on Castle Street. Fantasma tells Sandslash that he can wish for his little brother back, using Fantasma's wish-granting powers. Sandslash accepts Fantasma's offer and wishes for his brother back. However, Sandslash wasn't specific enough, so Fantasma brought back some incarnation of Sunnyscythe- since Litle P and Sunnyscythe are genetically identical, they are both Sandslash's "brothers."
Briefly, Sunnyscythe wished for Sandslash's memories to be wiped and turn into Sandsmash once again in order to fight Team Pokestrikers. After the battle, Sunnyscythe, frantic, wishes Sandslash and the Pokestrikers "somewhere else".

power, but Fantasma promised that he would make Sunnyscythe virtually indestructible, and his son accepted. Fantasma then equipped his son with a new robotic suit that would expand with him as the power filled his body and had an unseen weapons arsenal.
Unfortunately, minutes into the wish, Sunnyscythe's chest began to expand faster than his body. His worried father explained that, due to the pressure and the immense amounts of power, Sunnyscythe's heart was going to explode, along with the rest of his body, if they didn't do something fast. Seconds later, Fantasma realized that to balance the pressure, they needed to go up into space, so he made Sunnyscythe wish to go into space. In space, Sunnyscythe's chest and heart immediately stopped swelling.


During the ensuing battle between Fantasma's and Unten's forces, Sunnyscythe's robotic body is destroyed by Strafe.

In the present-day timeline of Sunnyscythe Plays War, Sunnyscythe's consciousness inside Mrs. P's body reawakens after his robotic body is destroyed. He takes over her body and forces her to hold the inhabitants of Castle Street's titular building hostage.
Initially, Jiggy P believes her mother has genuinely gone mad, but later realizes that Sunnyscythe is responsible. Mrs. P's consciousness struggles for control over her body and provokes Sunnyscythe into drawing a gun on Jiggy. Mrs. P then forces Sunnyscythe to drop the gun and shouts for Jiggy to shoot her with it, in order to kill Sunnyscythe.
Strafe and Litle P arrive back on Castle Street after hearing about Mrs. P holding the vastle's inhabitants hostage. Strafe enters the castle and shoots Mrs. P/Sunnyscythe.
In what appears to be some kind of limbo, Mrs. P tells Sunnyscythe that as he is essentially a being of energy now, since his original body long has died, he is no longer affected by the chip in his brain. She tells him he has enough of the power he absorbed from the Fan and the Enemy left to heal Mrs. P's gunshot wounds, but if he did so, he would use up his remaining strength and die for good.
Sunnyscythe voices his fears that he will go to Hell for what he did during his life. He asks Mrs. P to pray for him, and heals her wounds.
It was later revealed that when the powers Sunnyscythe absorbed were used up they reformed back into The Fan and The Enemy.

In this Purpleverse Day 2010 game, Sunnyscythe appears as one of the main villains. He leads a small organization of Purpleverse villains consisting of Janie Twice, Scythe Guy , and later CrackedEgg. CrackedEgg develops a friendship with him during the game. They later kidnap and blackmail The Groo, who is more or less on the good side now, into joining their group.

In the Purpleverse 2010 Day game Dark Purple, Sunnyscythe appears as the main villain in Purple Guy's story as the head of Neverworld Inc. The psyco Pichu is useing the power of the Neverworlder to destroy entire planets and absorb their power into himself. He resides in a twisted spaceship called Sunnyscythe's Playohuse, which is filled with dangerous toys such as toy soldiers and killer dolls. He is eventually killed by Purple Guy.

Sunnyscythe appears in this game as Litle P's transformed state, after the darkness consumes him. After the battle, he is separated from Litle P, and runs off to an unknown location.

Sunnyscythe plays a major part in Neverworld The Second, appearing as a minor antagonist. Making his debut near the end of the game, Sunnyscythe kills Janie Twice and kidnaps the Piper and PIKA. Upon capturing them, he plans to have them killed.

Sunnyscythe is cruel and sadistic. He has taken advantage of Randy and Lotey Crysaline via blackmail, he has tortured helpless pokemon, and is "the polar opposite of Litle P."

A full gallery of all artwork of Sunnyscythe. 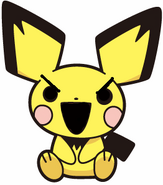 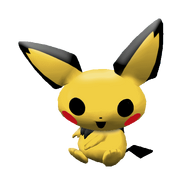 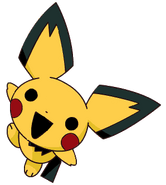 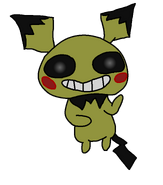