Gelete Rubino, usually known as Sugarspike, is a red Gummi. She is the mascot of the Gummi Squadron!!! series.

Sugarspike was born in Gelatine Gardens. At one point in her childhood, she got into a fight with some troublesome Gummi, discovering a love for combat. Later on, she met Unispike, and they became best friends.

During an exploration trip in the Sugar Caverns, she stumbled upon a well of pyrokinetic Sugar Crystals, which she harvested and used to craft her current set of armour and spikes.

She would later go on to found the Spike Club with Unispike, recruiting Sakuraspike and Tundraspike to join. Together, they would train and prepare for any potential conflict.

When the Gloop invaded, Sugarspike tried to fight them back. She rescued the player character from a group of Lesser Gloop, and later suggested forming the Gummi Squadron.

In this game, Sugarspike is an Assault-Class Red Gummi. She is unlocked after the prologue.

In this game, Sugarspike appears as a Summoner Orb character. When summoned, she will run around, using Inferno Ram when she sees an enemy on the same platform. The player who summoned her can use her as a platform to stand on.

In this game, Sugarspike appears as a Summoner Orb character. She acts identical to her appearance in Fantendo Smash Bros. Something.

In this game, Sugarspike appears as a Hero Card. 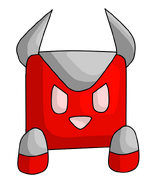