You might be looking for the original Strafe Lockborn, who can be found here!

“Yeah, having claws for hands and feet is awesome... but the point of my old arms and legs, of my ears and nose and eyes, is that they were mine. And I can't exactly speak for others, what with my job and all, but when something's stolen from me, I want payback. With interest.”
— Strafe, on his vendetta against the Twisted Cross


Strafe Lockborn is an elite member of the Thieves' Guild, a secret international organization of con artists and burglars for hire, and a victim of the plague known as the Rot.

He is Omega Prime's version of Strafe.

Strafe is a sickly-looking human male with naturally cyan hair shaved on one side and hanging down to his chin on the other. His mouth is usually curved into a wry smile. His most notable facial features are his eyes, ears, and nose, which were either destroyed or removed by Rot. He tends to cover all these missing features with a large blindfold wrapped around the center of her face. Another side-effect of the Rot was the loss of his limbs past his elbows and knees, and he instead has four super-advanced prosthetic limbs. These prosthetics are made of metal and end in dexterous claws. He dresses mainly it jackets and jeans, and is sometimes known to go bare-chested for reasons unknown.

At his most basic, Strafe is an ordinary human. He has no unique powers stemming from genetic mutations or alterations in his species. However, he has received high-level training from Noah's Thieves' Guild, which gives him a skillset not many others can match. He is a master of stealth, and is generally capable of moving in near-total silence whenever he desires. He is also an impressive gymnast and acrobat, a professional pickpocket, and a veteran at breaking and entering without leaving much of a trace. He's also proficient with a wide variety of firearms, as well as a few melee weapons and at least one style of martial arts.

Strafe's most unique traits are ones that came as a result of his run-in with The Rot. Most notably are his four advanced bionic limbs, which join with the stumps that remain of his original body parts at his elbows and knees. Each limb ends with a set of dagger-like claws. The insides also contain hollow cavities in which Strafe has been known to stash tools or valuables. The Rot also left him completely blind, but he makes up for this using the same prosthetics, which translate vibrations around him into a picture of his surroundings before sending the picture to his brain. He can pick up ground-based vibrations best, while aerial vibrations are hazier and become outright impossible to "see" at greater distances. In short, if it's on the ground, Strafe is able to "see" where it is relative to him. He can also use his honed senses of hearing and smell to make up for the vibration detection's shortcomings in a pinch.

Strafe's previous design, in which he still had his eyes and kept his nose and ears completely uncovered 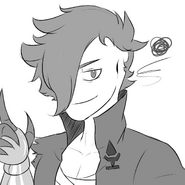 Retrieved from "https://fantendo.fandom.com/wiki/Strafe_Lockborn_(Omega_Prime)?oldid=3155055"
Community content is available under CC-BY-SA unless otherwise noted.