“Okay Team Sticks. The first thing you need to know is survival skills aren't about crafting and making things pretty. It's using what you got.”
— Sticks, as she teaches Amy about survival in the wilderness.

Sticks the Badger is one of the main characters in the Sonic Boom series. She is an anthropomorphic jungle badger and a force of nature in every way. She has spent most of her life living alone and flourishing in the wilderness and is as such new to friends in general. After meeting Team Sonic, however, she forms a strong bond with the group, particularly with Amy Rose, and joined the team as their wild card.

According to Hiroyuki Miyazaki, Chief Content Officer for the Sonic Brand, Sega of America, "Sticks is a significant addition to the Sonic Boom universe and the Sonic the Hedgehog franchise" and is meant to form the core ensemble featured throughout the Sonic Boom franchise alongside Sonic, Tails, Amy and Knuckles. She is meant to bring a quirky personality and perspective to the team dynamic and her character adds an endless amount of humor and surprise to the Sonic Team.

Early artwork of Sticks shows she was supposed to have white sports tape on her hair locks and only have one eyelash per eye. The sports tape was eventually changed to auburn strings and she ended up having two eyelashes per eye instead.

Sticks appeared as a non-playable character in Sonic Boom: Rise of Lyric; first appearing on Bygone Island. If interacted with, Sticks will tell the player that if they could find Shinies, she will exchange them for Crowns. She was then last seen at the village after Team Sonic defeated Lyric, taking an item and thanking them for their help.

In Sonic Boom: Shattered Crystal, Sticks entered a ravine for the purpose of "gettin' info from the rocks" where she was caught in a rockslide. Back on safe ground after saved by Team Sonic, Sticks told her friends that an underground army would rise and destroy them all, but was met with severe skepticism. Later on, Sticks teamed up with Sonic, Tails and Knuckles to track down and save Amy who had been kidnapped by Lyric and his robot army, who sought to use her archaeological knowledge to find a Lost Crystal of Power and seize unlimited power.

Sticks appears in Sonic Heroes 2. In that game, she is a non-playable character, and mans the four shops in the Chao garden.

Sticks is one of the unlockable characters from a Mystery Monitor. You can also buy her from the store for 25 Red Rings. 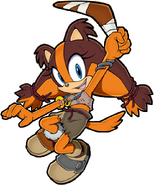 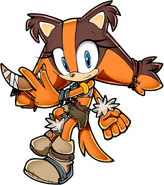 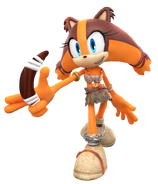 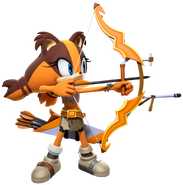 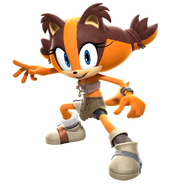 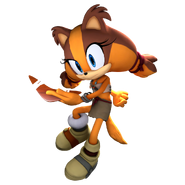 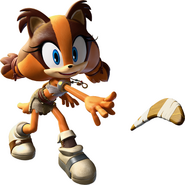 Art by JaysonJeanChannel
Community content is available under CC-BY-SA unless otherwise noted.