Start a Wiki
“I will fight to be everything that everybody wants me to be when I'm grown!”
— Steven Universe, "We Are the Crystal Gems" (extended version)

He is the son of Greg Universe and Rose Quartz, and the only male and part-human Gem (not counting fusions of which he is a component). A half-human, half-Diamond as a result of his parentage, Steven is an extraordinary, unique and powerful being that neither species quite understands. Guided and aided by the other Crystal Gems, Steven's destiny is to protect humanity as his mother did before him.

Steven is relatively short with a thick, stocky build. He has curly, dark brown hair and black irises. He wears a reddish-pink T-shirt with a bright yellow star on it. He also wears blue jeans and light reddish-pink flip-flops. His gem, a rose quartz which he inherited from his mother, is where his belly button should be.

Between ages 14 and 16, he grew a neck and received an update to his outfit offscreen, consisting of a pink varsity jacket over a blue shirt with the Crystal Gems' star emblem.

Steven is an amicable, outgoing, and carefree boy with a happy-go-lucky attitude that is appreciated by many of his acquaintances, friends, and teammates. He is musically inclined, a trait inherited from his father, with a propensity for breaking out into song and (occasionally) playing on his ukulele. Steven is also very kindhearted and compassionate, something which Pearl notes he has inherited from his mother, and he deeply loves his friends and family. He is friendly toward almost everyone he meets, rarely holds grudges, and is very non-discriminatory, never treating anyone with prejudice. No matter the situation, Steven will always go out of his way to support his loved ones, even if it means putting his life on the line, and he will avoid resorting to violence.

Steven looks up to his caretakers—Garnet, Amethyst, and Pearl—and considers them his family. He wants to be a great hero just like them, and he is eager to go on adventures with the trio, both to prove his worth and to have fun exploring strange lands. Despite his under-developed magical power and lack of experience, he has proven himself to have much heroic potential through his resourcefulness, optimism, and confidence.

Steven is rather naive and socially oblivious, due to his isolated upbringing by the Gems. He is often prepared to go on adventures at a moment's notice, but he has a habit of biting off more than he can chew, requiring the Gems to intervene. With his unique way of handling problems, he tends to make situations worse before he makes them better. For a while, despite experiencing near-death or traumatizing events, Steven would retain his child-like innocence and obliviousness to the dangers. Following the revelations of the Gems' dark history and the encounter with Jasper however, Steven has gained a new level of seriousness about the dangers of being a Crystal Gem. This initially made Steven self-conscious about his immaturity and he resolved to outgrow it, although his misguided attempt would be a source of self-inflicted misery as he tried to break off his friendship with Connie to protect her from harm; it was only Connie's sensible nature that stopped him from going down a bad road. Some of this social pressure was alleviated in the events of "Joy Ride", when Jenny, Sour Cream, and Buck helped to convince the Gems that Steven needed a break after being hit so hard from all sides.

Like his mother, he appears to be very charismatic, easing a raging crowd (in the episode "Political Power"), motivating his friends and father in working out and Pearl to find strength to fight Sugilite (in the episode "Coach Steven").

Steven, of course, has sandard abilities, such as punching and kicking.

Being half-human and half-Gem, Steven is capable of using magic, though it is unknown if he possesses all the abilities of a pure Gem, such as retreating to their gemstone when taking fatal damage. As associated with his gemstone, Steven's powers are maternal in nature and the control of his gem is based on emotional clarity.

Steven has shown to have some abilities of a regular Gem, but sometimes has little control of them due to not receiving enough training. He can also warp using the warp pads, and bubble objects and gemstones to be teleported to the temple with seemingly full control. He has also been shown to be able to fuse, when he fused with Connie to form Stevonnie. However, he has not yet fused with a Gem. Steven is also capable of shapeshifting, but he has not yet learned to control it. His first (and, so far, only) attempt in the episode "Cat Fingers" was disastrous, temporarily turning him into a cat monster.

Steven Universe: Gems From Beyond

In this game, Steven appears as a default playable character. His weapon is a shield, and some other abiltiies of his include simple punches and kicks, summoning his indestructible bubble, and using weaponry that is equipped. 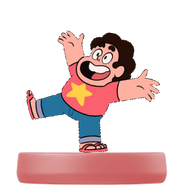 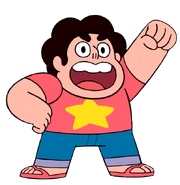 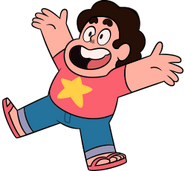 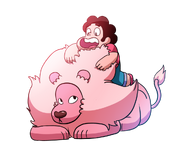 Steven and his pet Lion.

Steven in a farmer's outfit.

Steven using his popular "Stevenbomb" on Garnet, a Crystal Gem.
Add a photo to this gallery
Retrieved from "https://fantendo.fandom.com/wiki/Steven_Universe?oldid=3043112"
Community content is available under CC-BY-SA unless otherwise noted.