Steve, originally parsed as Steve?, is one of the two main protagonists of Minecraft. Steve is essentially one of the default skins given to the player upon creating a Minecraft account, and is used whenever a player's skin can not be loaded/is not present. The 1.8 update of Minecraft added Alex, a female equivalent to Steve.

Steve can easily be recognized by his square face, each side being eight by eight Minecraft blocks if to scale. He has blue eyes, brown hair, a small rectangular nose, and a smiling mouth. Due to his eyes being two pixels wide, Steve appears to be cross-eyed. Prior to update "0.24 SURVIVAL TEST" of Minecraft Classic, Steve had a brown beard.

He is commonly depicted wearing a light blue T-shirt, untucked from his dark blue pants at his right hip, and grey shoes.

In Minecraft: Wii U Edition, Steve appears as the playable character and replays his adventures on the Nintendo console.

In the upcoming Nintendo-PC game, PC Smash Bros., Steve will be the main character, taking a role similar to the one Mario takes in the Super Smash Bros..

Steve's homestage is the Biome Distortion stage. On this stage, the Biome is constantly changed from a savannah to a desert to a mountain, and back.

Steve appears as a playable character in Super Smash Bros Overdrive, representing Minecraft along with Iron Golem and Enderman.

Steve is supporting character in the film Super Mario and Friends: Zennu Quest. He is a guest for Nintendo's 125th anniversary party.

Steve appears in Minecraft Party. His powerful move is the pickaxe.

Steve (stylised as Steve? in game) is a default character in Super Smash Bros. A New End. He wears diamond armour and has a diamond sword. Steve has a pallet swaps for him without armour, his various other versions, Alex and Jesse.

Steve is a playable character in PlayStation All-Stars: Ultimate Battle. He has 8 palette swaps. 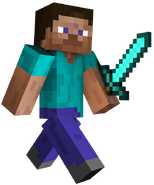 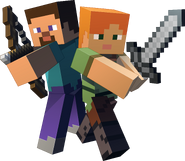 Steve in SMG4's videos
Add a photo to this gallery

Add a photo to this gallery
Retrieved from "https://fantendo.fandom.com/wiki/Steve_(Minecraft)?oldid=3332006"
Community content is available under CC-BY-SA unless otherwise noted.