Starlow (known as Chippy to Bowser) is a recurring character that appears in the Mario & Luigi series, first appearing in Mario & Luigi: Bowser's Inside Story. She is a Star Sprite who acts like a helper and guide to Mario and Luigi, giving hints to them and holding any items they obtain in the Star Menu (or just known as the "menu"). Her name is a portmanteau of the words "star" and "yellow".

Starlow looks like a yellow ball with a face and feet with a star floating above her. Her appearance is presumably the same as a normal Star Sprite, albeit having no mustache, most likely that she is a female Star Sprite.

Starlow appears as Mario and Luigi's helper in Mario & Luigi: Sibling Warfare. She has a similar role yet bigger then Mario & Luigi: Bowser's Inside Story. The other Star Sprites also appear in the game alongside her.

Starlow appears in MHL 10 as a playable character. She shares chemistry with Mario, Luigi, and Peach.

Starlow makes an appearance in this game. Her purpose is similar to the one of the Cosmic Spirit from Super Mario Galaxy 2 (who got a similar purpose to the Super Guide Block), and partly the one of Robud of Super Mario Nation. Starlow can help the player by guiding him/her to the Power Star whenever they lose eight lives in the same mission. However, a Bronze Power Star will be obtained instead, and not counted as a normal Power Star.

Starlow appears in NSMB on Peach's team. Her stats have not been revealed.

Starlow is a Downloadable character in Super Smash Bros. 8. She can be bought for $12.89. Her purpose in the game's story mode is unknown.

Despite his victory against Kirthar, She's one of the victims of the Kirthar's Snap Finger. 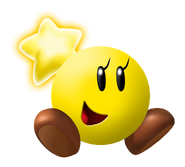 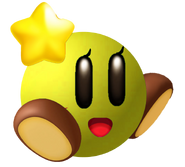 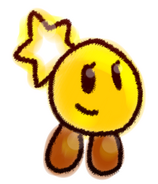 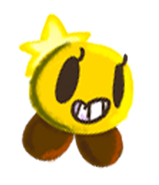 Add a photo to this gallery
Retrieved from "https://fantendo.fandom.com/wiki/Starlow?oldid=3233233"
Community content is available under CC-BY-SA unless otherwise noted.