Star Wars MMO is an action persistent-world game by Clover Entertainment. It is based off the Star Wars franchise. It will be released on August 12, 2012. It is one of the few MMOs to be avaliable for Xbox 360, PS3, and Wii U, as well as PC.

The game is an MMO with a persistent-world based off the Star Wars franchise. It features enormous open-world environments. You can go on different planets, and team up with or fight your friends. You can customize your own personal character. It can be a Jedi Knight, Sith Lord, Stormtrooper, Battle Droid, or even a General Grievous-like creature. You can also choose a weapon. It can be a lightsaber that can be any color you want: Blue, Red, Green, Yellow, Purple, even Brown. If you don’t want to play as your own original character, you can also play as characters actually in the Star Wars franchise, such as Darth Vader, Luke Skywalker, Han Solo, Anakin Skywalker, Obi-wan Kenobi, or even General Grievous and Boba Fett.

Aside from customization of characters, you can also ride any vehicle from the Star Wars franchise. You can engage in intense battles in space, on planets, or in cities, on foot or in vehicles. You can team up with your friends to battle the enemy or go it alone. The levels looks so real and so lifelike, you’ll want to roam the area just to see it. You can also use attack vehicles to destroy enemy bases, native cities, and other ships. Environments are completely destructible with amazing physics with the Clover Engine 2.0. You can attack people’s cities, destroying buildings and vehicles defending the city. After that, you have to attack the city hall. Then you have the choice of capturing the city and taking over the city, or continue attacking the city hall and destroying the city, making it completely uninhabitable and striking a big blow to an enemy empire. If you take over a city, it will rebuild itself, and it will belong to your empire.

Speaking of choice, that’s a big thing in the game: giving the player choice. If you want to pick a fight with enemy forces, you can do that. If you want to hijack an enemy vehicle and use it against them, you can do that. If you want to hunt native species on a planet, you are capable of doing so. Not only that, you also have the ability to choose the saga of Star Wars you want to play in. You can choose between playing the timeline of Episodes 4-6 (which was the ORIGINAL Star Wars trilogy) or playing in the Clone Wars timeline, of Episode 1-3 (the newer trilogy).

Many planets from the movies will be in the game: Tatooine, Naboo, Endor, Hoth, Genesis, Corcusant, and more, all of which are huge and open-world. You don’t have to sign up for anything. You don’t even need Nintendo Wi-Fi or Xbox Live. You can just buy the game for any system, put in your console, and start playing with your friends. That’s it. Nothing else. 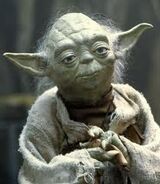 Yoda: 'Yoda was one of the most renowned and powerful Jedi Masters in galactic history. He was known for his legendary wisdom, mastery of the Force, skills in lightsaber combat, and speaking backwards (For example: "Defeat Darth Vader, you must"). Yoda served as a member of the Jedi High Council in the last centuries of the Galactic Republic and reigned as Grand Master of the Jedi Order before, during and after the devastating Clone Wars. Following the Battle of Geonosis, Yoda held the title of Master of the Order in addition to that of Grand Master. In his centuries of service to the galaxy and the Force, Grand Master Yoda had a hand in the training of nearly all the Jedi in the Order, including such luminaries as Obi-Wan Kenobi, Ki-Adi-Mundi and Oppo Rancisis; all of which would come to serve on the Jedi Council along with him.

Darth Vader: Once a Jedi Knight, Anakin Skywalker swore loyalty to Sith Lord Darth Sidious in order to gain the power of the dark side of the Force. Vader betrayed the Jedi Order and his Master, Obi-Wan Kenobi. With the rise of the Galactic Empire, Darth Vader became the Emperor's dark enforcer. He carried out the Emperor's will, and commanded legions of Imperial troops. Vader was tasked with discovering the secret headquarters of the Rebel Alliance, as well as chasing down the Rebels who destroyed the Empire's massive Death Star battle station. 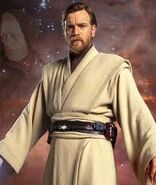 Obi-Wan Kenobi: Obi-Wan Kenobi, later known as Ben Kenobi during his exile, was a legendary Jedi Master who played a significant role in the fate of the galaxy during the waning days of the Galactic Republic. He was the mentor of Anakin and Luke Skywalker, training both in the ways of the Force. He had a long and tumultuous career that helped shape the fate of the entire galaxy. Kenobi fought during many battles of the Clone Wars, and was one of the last members of the Jedi High Council.

Boba Fett: Boba Fett was a Mandalorian warrior and bounty hunter. He was a clone of the famed Jango Fett, created as the first of many Fett replicas designed to become part of the Grand Army of the Republic, and was raised as Jango's son. Jango taught Boba much, training him to become as skilled bounty hunter as his father-figure was before him. In 22 BBY, Jango was killed at the Battle of Geonosis, which opened the Clone Wars. Just a boy, Boba was forced to grow up and took to traveling the galaxy. Later, he became a bounty hunter and took assignments from beings such as Jabba the Hutt, and achieved notoriety despite his young age.

General Grievous: Grievous, born as Qymaen jai Sheelal, was the cyborg Supreme Commander of the Droid Army of the Confederacy of Independent Systems for most of the Clone Wars. Grievous killed many Jedi, and led the Confederacy to victory in many battles. Quickly gaining a reputation as a savage, merciless brute as well as a tactical genius, the cyborg struck fear into the hearts of many.

Chewbacca Chewbacca (or "Chewie", as he was known by his friends) was a legendary Wookiee from Kashyyyk and co-pilot of Han Solo's ship, the Millennium Falcon. He was the son of Attichitcuk, the husband of Mallatobuck, and the father of Lumpawaroo. Chewbacca carried with him the name of an ancient Wookiee hero, the great Bacca, first of the great chieftains of Kashyyyk, and the creator of a sword that denoted leadership among the Wookiees. This name placed Chewbacca in a noble lineage, which was further supported by his role in the Battle of Kashyyyk during the Clone Wars and during the Galactic Civil War. 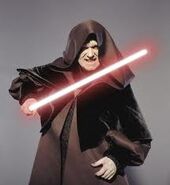 Emperor Palpatine: Palpatine, also known as Darth Sidious, was a Force-sensitive Human male who served as the last Chancellor of the Galactic Republic and the first Emperor of the Galactic Empire. He was a Dark Lord of the Sith who followed the Rule of Two, an ancient tenet of the Order of the Sith Lords, and was the most powerful Sith Lord in galactic history. His entire life as a Sith was the culmination of a thousand year plan to overthrow the Republic and the Jedi Order from within. As Palpatine and Sidious, the Dark Lord was responsible for escalating the Separatist Crisis until a galactic-wide conflict, known as the Clone Wars, began when the rebellious Confederacy of Independent Systems challenged the Republic for primacy over the galaxy.

Darth Maul: Darth Maul was a male Dathomirian Zabrak Dark Lord of the Sith who lived during the waning years of the Galactic Republic. Originally a Dathomiri Nightbrother born on Iridonia and known only as Maul, he was given, as an infant, by his Nightsister mother on Dathomir to Darth Sidious, who trained him in the ways of the dark side of the Force as his secret apprentice on a secret Mustafar training facility, along with the help of a split personality droid. Maul became a master of Juyo, Jar'Kai, and Teräs Käsi, with training in Niman, and chose to wield a red-bladed saberstaff in combat. Though well trained in the ways of the Sith, Maul was technically a Sith Lord in violation of the Rule of Two because his own Master was at the time apprenticed to another, the Muun Sith Lord Darth Plagueis.
Add a photo to this gallery

AAT Tank: The Armored Assault Tank (AAT-1 or AAT) was a medium-sized repulsor tank used mainly by the Trade Federation and the Confederacy of Independent Systems prior to the rise of the Galactic Empire. These vehicles saw service most notably during the Invasion of Naboo and the later Clone Wars. The vehicle was designed by the Baktoid Armor factories, with its most important parts placed in the back. Piloted by OOM pilot battle droids, AATs comprised a significant portion of the Trade Federation's ground forces.

AT-AT: The All Terrain Armored Transport (AT-AT) walker, also known as the Imperial Walker, was a major part of the Galactic Empire's army. It was one of the most heavily armored land vehicles in the Imperial Army, but was also known for its relatively slow speed.

AT-TE: The All Terrain Tactical Enforcer (AT-TE), sometimes called tanks by clone troopers, was an all terrain assault walker developed for the Grand Army of the Republic during the Clone Wars. It was also one of the the first precursors of the AT-AT walker. It would later be used on a limited scale by the Galactic Empire.
Add a photo to this gallery

X-Wing: The X-wing was a prominent series of multiple starfighters produced by Incom with a characteristic "X"-shape of four wings, known as S-foils, extending out from the fuselage. These starfighters were found in the service of the Rebel Alliance, New Republic, and also the Galactic Alliance. They were originally meant for the Galactic Empire but when the entire Incom design team defected with the prototypes to the Rebel Alliance this deal was over.

Y-Wing: Affectionately known as a "wishbone" to Rebel Alliance and New Republic pilots, the Y-wing starfighter was deployed as a fighter-bomber, designed to fight its way to its objective, deliver its payload of high explosives, and fight its way out again. Its weaponry included two laser cannons, two ion cannons, and two proton torpedo launchers. An astromech droid, such as an R2 unit, could be plugged into a socket behind the cockpit to act as a co-pilot and manage the ship's various systems.

Jedi Starfighter: The Jedi Starfigter, sometimes referred to as the Jedi interceptor due to its extensive use by Jedi pilots, was a Republic starfighter used late in the Clone Wars that shared design elements with the Republic's Delta-7 and Delta-7B starfighters, as well as the TIE fighters of the later Galactic Empire. The Galactic Alliance would later come to utilize a successor, the Eta-5 interceptor.

Tie Fighter: A modest upgrade of the T.I.E. starfighter used by the Galactic Republic, the TIE starfighter had a centralized power generator running both the engine and the weapons, unlike the later TIE Line starfighter, which had separate generators. It was tougher than the final TIE/In version, but also cost more. It featured weak shields, a small hyperdrive and two one-shot concussion missile launchers, which allowed it to serve as a light bomber, long-assault craft or snubfighter. Unfortunately some of these systems were incompatible with the Twin Ion Engine and required a secondary power supply to operate. The TIE model was slower than the TIE/ln, and its laser cannons were not as powerful.
Add a photo to this gallery
Retrieved from "https://fantendo.fandom.com/wiki/Star_Wars_MMO?oldid=2895546"
Community content is available under CC-BY-SA unless otherwise noted.