Star Coins are items in the Mario series. There are three Star Coins in every level and they can be used to unlock levels, item shops, tips, and other things depending on the game. They are usually hidden in hard to reach areas that require precision platforming.

Star Coins appear in every level of New Super Mario Bros.: Superstar Adventure. They can be used to buy new mini-games at Peach's Castle.

In this game 3 can be found in each level. They can be later used to buy items in toadettes shop. They also appear in battle mode but here the player who collects more till the end of the game wins. 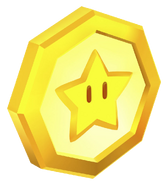 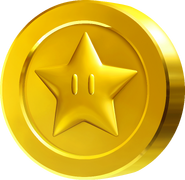 New Super Mario Bros. 2
Add a photo to this gallery
Retrieved from "https://fantendo.fandom.com/wiki/Star_Coin?oldid=3226119"
Community content is available under CC-BY-SA unless otherwise noted.