Start a Wiki
Stanley is a main character in the Bombell series. Stanley become one of Bombell's friends and joins him in his quest after giving his stolen magic stick in World 4 of Bomb Frenzy. He's misterious and also very curious. Not much more is known about him. Stanley loves to do magic and very strange tricks with his magic stick.

Stanley is a light red (maybe hot pink) Boo. He has blue eyes and a yellow mouth, with a yellow tongue as well. He wears a black top hat with a red tape and is often seen with his magic stick. He also have two yellow stars at the sides.

Stanley debuts in Bomb Frenzy as a playable character and one of the heroes. He joins Bombell in his adventure after helping him and giving him his magic stick in World 4.

Stanley, along with Bombell, Booster, Bombella and Benjamin, appears as a Downloadable Playable Character in Super Mario Smash Bros.

Stanley is one of Bombells friends and they are often seen sharing and talking along with the other ones. He joins him in Bomb Frenzy when Bombell gives him his magic stick.

Booster and Stanley are also good friends, as they are sometimes seen playing and talking.

Not much is known, but they are also friends as seen in Bomb Frenzy. 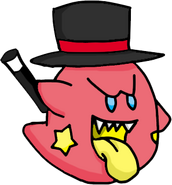 Bomb Frenzy
Add a photo to this gallery
Retrieved from "https://fantendo.fandom.com/wiki/Stanley_(Bombell_series)?oldid=2029522"
Community content is available under CC-BY-SA unless otherwise noted.