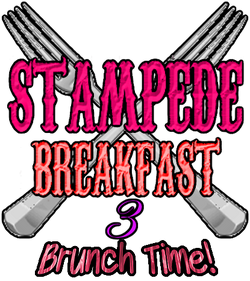 Stampede Breakfast 3: Brunch Time! is an umbrella platform fighting game developed by Crash Co. and released for the Nintendo Switch. The game was first teased during Crash Co.'s May 30th, 2018 Direct. It is the third game in the Stampede Breakfast series, and as such features a diverse roster of characters, ranging from well-known icons to weird, obscure characters. As stated by Crash Co.'s director, the game is stated to be "much more technical than your average Smash clone".

The core gameplay is the same basic idea in previous Stampede Breakfast titles and, in turn, the Super Smash Bros. series. Players need to rack up damage with attacks so that they can easily launch opponents off-stage to KO them. Almost all characters have the same button inputs for their special attacks.

Compared with the said titles however, Stampede Breakfast 3 is more technical by comparison, courtesy of several different techniques available to players. Inspired by Cloud's Limit Break in the Super Smash Bros. series, every player has a meter called the Omega Meter. This will fill as the player takes and delivers damage. Once filled, they will be able to launch a powerful attack called an Omega Blitz. However, as the Omega Meter fills, players are able to use it to make one of their special attacks stronger, called an Omega Attack. Though this makes them better by comparison, it will in turn deplete some of the player's Omega Meter. Players can also use the Omega Meter to enter a state called Omega Fury; in this state, the player's stats will be increased for a short time. As it is used, the Omega Meter will deplete. Players can exit out of the state at any time, though if the Omega Meter runs out while in Omega Fury, the player will explode and suffer heavy damage.

Another ability all fighters have is a unique "Trait" move. The usage and applications of Traits differ across all characters. For example, King K. Rool's Trait will have him jump in the air and make it rain cannonballs on opponents when he lands. Meanwhile, Absinthe's Trait will have her summon one of the other four members of the Babylon Rouge Squad, who will attack opponents differently depending on which one is summoned.

The Fighter Workshop is based off of the customization features in Super Smash Bros. for Nintendo 3DS / Wii U. Here, players are able to alter properties of characters and their moves, allowing for new and different playstyles. Players are also able to create their own pallet swaps in this mode. All of these can be saved as loadouts to use in battle.

The game features a wide variety of characters to play as, each with their own strengths, weaknesses, and playstyles. Some of these characters also have special abilities, weapons, and even appearances exclusive to the game's story mode, which are carried over to normal play.

Echo Fighters, a concept introduced in Super Smash Bros. Ultimate, are used in this game, and can either be separate from their original fighters or stacked with them. Echoes are labeled with an Epsilon symbol (ε) next to their name, and are listed after their original counterparts.

Story Mode: Race to the Core

The game's Story Mode, Race to the Core, is split into three separate campaigns detailing the same side of the story. In a similar manner to the Subspace Emissary in Super Smash Bros. Brawl, the player will take control of different characters as they go through different stages and progress the story. The basic plot synopsis sees several villains working together to drill into a strange planet called Xeron in order to reach the core, said to hold the source of unlimited power, and use said power to rule the universe. Meanwhile, a group of heroes team up to stop the villains, heading for Xeron. Several other characters unrelated to the story are also on Xeron for their own reasons.

The three campaigns have the player play as and battle different characters. The characters playable in each campaign are as follows:

A full plot synopsis can be found here.

Breakfast Buffet is a mode inspired by Smash Run in Super Smash Bros. for Nintendo 3DS and City Trial in Kirby Air Ride. The mode revolves around players traversing through a massive labyrinth in order to defeat enemies and collect special Bacon Spheres. Both of these can give players points, and whoever manages to get the most points within the time limit will win. The time can be set from anywhere to five minutes to 15 minutes. Players can also alter how often enemies will spawn.

Cranky's Cabin is a collection of rants from Cranky Kong, detailing the abilities of the playable characters. Though they generally give the player advice on how to beat them, they are quite satirical and humorous.

A list of the Cranky's Cabin rants can be found here.

A list of trailers for the game's characters can be found here.

Retrieved from "https://fantendo.fandom.com/wiki/Stampede_Breakfast_3:_Brunch_Time!?oldid=2825483"
Community content is available under CC-BY-SA unless otherwise noted.